"Dirty gem"
German drama captures the raw emotions and the ignorance of youth to their impending existential crisis - in cinemas and on VoD platforms on Friday, December 11th

It’s a simmering Berlin summer, the hottest on record and in the middle of gym day, Nora (Lena Urzendowsky) has her first period in front of everyone. The incident embarrasses her older sister Jule (Lena Klenke) and her best friend Aylin (Elina Vildanova), who she tags along with as a third wheel. When student Romy (Jella Haase) rushes to help her, it’s the beginning of a life-changing moment, and as their friendship blossoms, Nora for the first time falls in love.

Cinema is populated with dramas about sexual awakening that prompts the question: why the continued interest – for storytellers and audience alike? In the case of the German drama Cocoon, the first reason is director Leonie Krippendorff confidently announces herself with this raw coming-of-age story. Beyond that, these tales of an intimate human experience must trigger impulsive emotional and intellectual pleasure. They must nourish our souls, providing us with something we crave that we may not necessarily be aware of, or we struggle to articulate. Deep down, we’re inherently fascinated by transformation that forms part of the cycle that defines our journey from life to death – the anxieties and the ecstasy. And in spite of our differences, this period of our lives is a traumatic experience that bonds us all.

You can feel the exuberant energy of youth that even the Berlin heatwave cannot quell. There are those bonds of friendship and love, an intimacy with a risk of vulnerability that adds intensity to the story of young people coming-of-age. Krippendorff understands the importance to create that intense feeling that comes with this period of abandonment – live for the day because the future has not yet arrived.

In an early scene, there’s a beautifully orchestrated sequence that acknowledges feelings exist even when not verbally articulated. We are who we are whether or not a side to ourselves is expressed.

Cinema allows for a silent visual expression between a character and the audience that makes storytelling in this medium special. This foreshadows much of the film because Nora is the silent type. She communicates with a mysterious look in her eyes or through her facial expressions, even the subtlety of her lips. While we must fill in these regular voids of silent uncertainty, we feel that we know what she’s thinking. 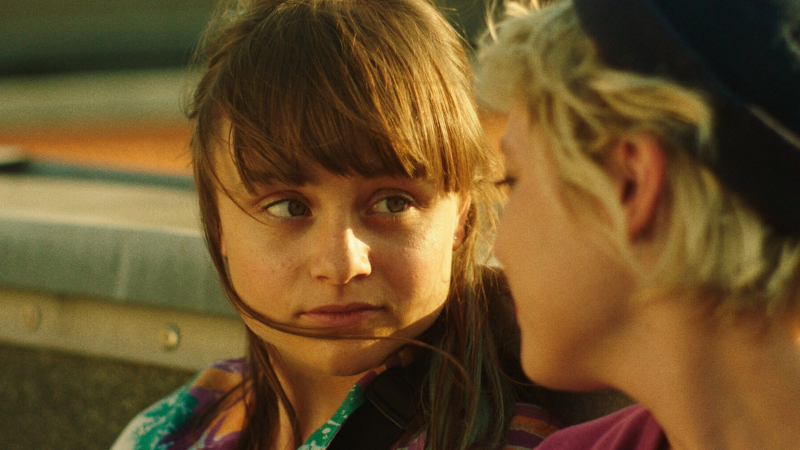 Later Nora confides in her teacher, “I sometimes find other girls really beautiful… But I think I look at them differently somehow, more like the way a boy would look at them.” The response of the teacher is the voice of the director saying we shouldn’t be so quick to define ourselves, because identity is made up of shades. Instead, we must be open to exploring all the crevices that characterises our persona.

Krippendorff keeps the focus on Nora, and refrains from deferring too much to her sister or any of her social clique, or to the drama of their absent mother. Nora’s silence is refreshing to her loud peers, who provoke a feeling of irritation at their immaturity. Here the exuberant energy of youth is like a flame, and we watch to see if Nora is drawn close enough to it that she will be burnt. The carefree youths fail to grasp the monotony of life and the existential crisis that will be their future. At some point, this chapter of their lives will come to a close, and adulthood and its responsibilities will set in. Unlike Nora, it feels that her peers are standing still and are failing to develop their self-awareness. Jule’s for example is frustrated at not being able to find a dependable boyfriend, while Aylin is full of lust not only for her boyfriend, but of living for the moment.

Nora sees life to be experienced, youth a stepping stone to adulthood, and the caterpillars she keeps at home become symbolic of her journey. She shares her wisdom with us when towards the end of her film she says, “Memories are all the butterfly keeps of its life as a caterpillar.”

The film is a snapshot of a specific period in a person’s life, but it’s more broadly about whether adolescent or adult, we must own our life story, the pain and the joy, and grow. At its simplest, Cocoon is a thoughtful story about how the journey of life is to learn about ourselves. We should not be possessive, but like the butterfly value memories and experiences over keeping alive moments or chapters.

Cocoon is out in cinemas and on VOD platforms on Friday, December 11th.