County Line is a term used to describe is the diabolical practice of heroin and crack dealers coercing at-risk teens into muling their Mephistophelian wares to rural villages, extending their grim tendrils outwards from urban seats of power. It is a phenomenon that has emerged from obscurity a few short years ago and grown to infamy, commanding headlines in recent months with countless police busts and agonising testimonials from those youths bullied, bribed or otherwise persuaded into these illicit machinations. With such dark subject matter, it is clear from the off that County Lines the film is not going to make for lighthearted viewing.

Tyler (Conrad Khan) lives in a cramped flat with precocious sis Aliyah (Tabitha Milne-Price) and harried mum Toni (Ashley Madekwe). She is the sole support of their family unit and is working long, exhausting nights as a cleaner to keep them afloat. With their mother barely present, Tyler is left to shoulder the responsibility of his own upbringing and that of Aliyah. All too aware of their precarious position, he internalises this stress and the cracks are starting to show.

He is despondent and combative in class, bullied and withdrawn. These are the perfectly fertile, vulnerable grounds for drug peddler Simon (Harris Dickinson) to plant his stake. By showing a bare minimum of humanity towards his plight and giving a whiff of potential reward, Simon quickly brings Tyler into the fold and dispatches him to the end of Essex on a demented orienteering trip that wastes no time in demonstrating the grim reality of the end user addicts. 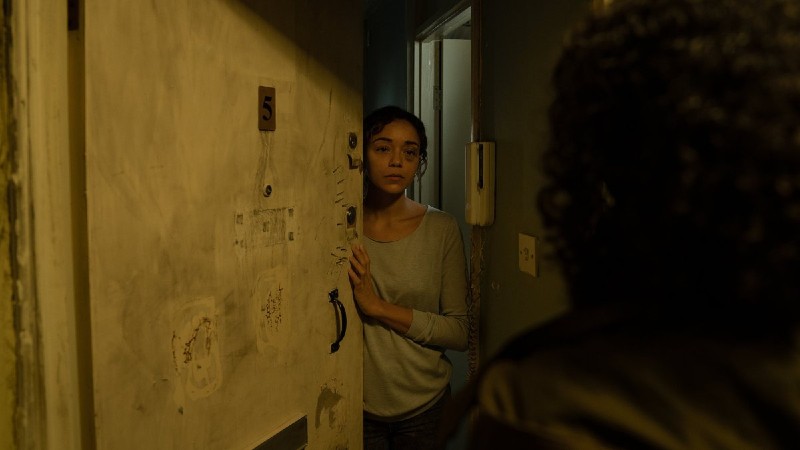 He’s a sweet kid, as evidenced by doting interactions with his younger sibling. Khan’s gentle voice is perfectly pitched to engender sympathy and he subtly conveys the deep anguish that lies behind his otherwise stoic countenance. Thus, the readiness with which he is willing to unburden himself to the practically anonymous Simon is heartbreaking. Indeed, the courtship requires zero effort on his part. Simply by returning respect with respect does he install himself as a role model in Tyler’s eyes. Caring teacher Laurence (Anthony Adjekum) could also have qualified but is perhaps too close to the establishment.

Speaking of, theirs is more of a correctional facility than a comprehensive school; near-windowless spaces lit only by the phosphorescent strip lighting beloved of internment camps. This must be a specific choice from director-writer Henry Blake, who propels his story along with short, sharp scenes. It is surely a story familiar from his past occupation as a youth worker and, if so, his view on the role of an unfit educational system in priming children for corruption is clear.

Elsewise, other than the obviously culpable criminal elements, no personal judgement is cast. This comes across particularly well in the scenes of disorderly home life. The flat is a tip but there isn’t exactly ample storage space at hand. They are practically living on top of each other, as highlighted by keen camera placements and a particularly miserable scene whereby Toni brings home a one-night and has loud sex through the paper-thin walls. It is not an ideal situation but it is people making do, as they are across the country. Small wonder, in the dregs of this squalid decade, that the county lines movement continues to claim victims.

County Lines is out in cinemas, BFI Player and Curzon Home cinema on Friday, December 4th.