The water crisis in Flint, Michigan is one the worst government debacles in recent memory, yet it is something of a footnote in US political discourse, especially to British observers. For 50 years, the people of Flint received their water supply from Lake Huron, one of the five Great Lakes. On April 25th 2014, however, the state government switched the water source to the Flint River, saving five million dollars for the city budget.

It was a moment that defied the most basic common sense. After all, the river has been a dumping ground for over 100 years, full of detritus that kills the fauna that drinks from it. Illness swept the city, as did rashes and bald patches following baths and showers. Soon, citizens resorted to bottled water for sustenance and baby wipes for hygiene. The problem was caused by the water’s corrosive properties, which tore layers from Flint’s lead pipes and poisoned thousands of people with neurotoxins.

The river is no longer used, yet the debacle continues – lead remains high in many Flint residents’ water, an outbreak of Legionnaires’ disease has been linked to the crisis, and just one government official has been convicted. Most disturbingly, the effect of lead poisoning on a whole generation of Flint’s children is yet to be understood. This catastrophe is symptomatic of the city’s deep-rooted woes. Like nearby Detroit, Flint was once a very wealthy city, buoyed by the strength of General Motors. This changed drastically when GM closed plants in the 1980s, sending Flint into a protracted depression. 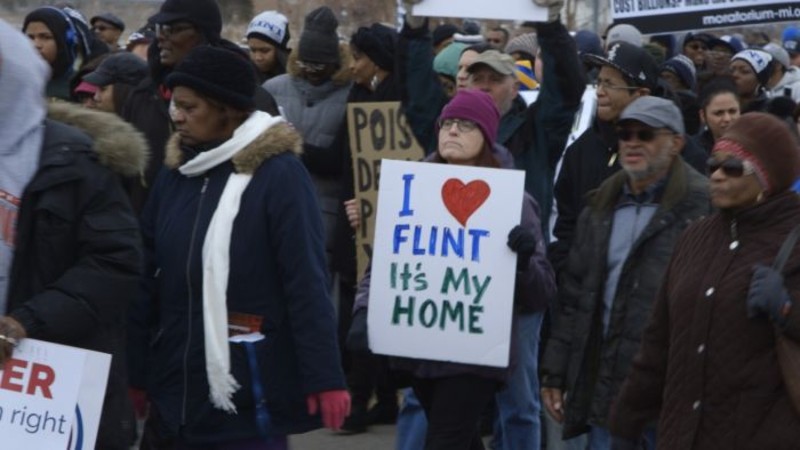 There is some dramatic licence, namely the ominous strings that compliment scenes of the grey, dilapidated city, yet Baxter’s film is more interested in the people of Flint rather than any kind of a cinematic yarn. Also, he appears only for several interviews and recruits Alec Baldwin as narrator. Baxter’s main role is that of camera operator, and he does so with a hands-on intimacy, following locals’ efforts to lobby the government, spread awareness, and help the community. Indeed, Baxter was very much a part of their effort, setting up camp in a nearby hotel so that he could document the unfolding political narrative.

The second half of the documentary sees a clash between Prof Marc Edwards of Virginia Tech University and Scott Smith, a ‘citizen scientist’ allied with actor Mark Ruffalo and his misguided Water Defense project. Edwards, the real scientist of the pair, is proven right as Smith eventually lays his pseudoscience bare – another American charlatan in the age of ‘alternative facts’. There is some narrative baggage outside of this feud. For example, scenes of Alec Baldwin meeting locals do nothing to advance the film’s investigation, amounting to little more than a bit of star power. It’s wrapped up rather suddenly, too, but that is to be expected in a documentary covering an ongoing event. In any case, Baxter has done a great service to the people of Flint, highlighting that without checks, balances and demands for accountability, the most basic tenets of developed societies can crumble.

Flint: Who Can You Trust is available to watch on BBC iPlayer from Wednesday, December 2nd.

Documentary shows Donald Trump in all his magnificent repulsiveness, but unfortunately it's more an encore than a sequel to its sterling predecessor - on VoD on Tuesday, August 18th [Read More...]