"Dirty gem"
Sicilian docudrama about two young men on the margins of society encourages empathy over recrimination of immigrants - in cinemas and exclusively on Curzon Home Cinema on Friday, December 11th.

Native Italian Oscar works with his father, helping collect scrap metal, while Stanley, a Nigerian refugee works in a church, then as a farm hand with the help of the local priest. They live seemingly separate lives, until a fleeting encounter one night.

Across a brief 80 minutes, we observe Oscar and Stanley who are meandering with no sense of direction, surviving or hoping for a better future, living a day at a time. Their lives are the literal act of putting one foot in front of the other. We witness the harsh reality of their lives on the margins of society, and because life needs to be something more, it stirs in us a yearning.

This is captured through the cinematography that has a gentle melodic rhythm. It’s ironically soothing and calming in spite of the emotion it provokes. Pennetta forces us to contemplate whether survival is enough, and does the act of surviving alone feed the soul? 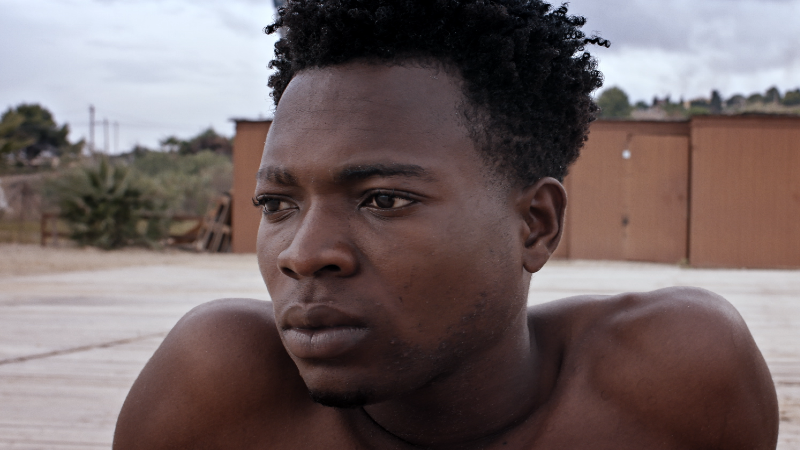 The young men are not spiritually or emotionally starved, they have close relationships – Oscar with his brother and Stanley with a fellow immigrant. By the time we reach the film’s end, we are weighed down with their burden of simply surviving, and in this moment we are forced to consider the difficult reality of life on the margins of society. The filmmaker challenges the heartlessness of right wing politics by provoking an empathy over recrimination towards immigrants, that extends to the growing poverty in contemporary British society.

Pennetta chooses to not unnecessarily dramatise the lives of the young men, nor to present them as victims. Instead, he honours a commitment to observe their experiences. To suggest that the intent is to leave us to engage with the pair and to feel and to think independently emerges out of the approach. What starts out as a record inevitably coalesces into something far more complex, embracing our own thoughts and feelings about this life on the margins.

The director’s subtle observational approach is the proverbial double-edged blade. It will limit its appeal to those with an interest that leans towards the esoteric, and will lead it to mirror the fate of its characters, at the margins of the popularised documentary cinema of the last decade. Yet the impression it makes cannot be denied – pictures, thoughts and emotion forge an undeniable bond that permanently tethers us to these two characters.

Il Mio Corpo is out in cinemas and exclusively on Curzon Home Cinema on Friday, December 11th.

German drama captures the raw emotions and the ignorance of youth to their impending existential crisis - in cinemas and on VoD platforms on Friday, December 11th [Read More...]