This is David Fincher’s long-awaited return to “theatrical features”, after doing mainly work for Netflix television with the series House of Cards and the fantastic Mindhunter. It’s based on a screenplay written by his father, Jack Fincher, with some uncredited rewrites by Eric Roth. The story is very loosely inspired by the New Yorker article “Raising Kane” by Pauline Kael.

Initially Mank was going to be Fincher’s follow-up to The Game (1997), with Kevin Spacey as Mank and Jodie Foster in an undisclosed role, but in the end he made Fight Club (1999). The fact that it had to be shot in black and white was a problem, until he made them butt loads of cash on Netflix and their willingness to fund black-and-white films.

The film is not about the making of Citizen Kane (Orson Welles, 1941) – you never see any of that, although you do see Mank receiving his Oscar for co-writing the screenplay. It’s a character study of Herman J. Mankiewicz, who is played by Gary Oldman, his life in Hollywood throughout the ’30s, and his contribution to Citizen Kane. If people are expecting to see a lot of Orson Welles in it, he is kind of a Charles Foster Kane type throughout most of it, an unapproachable person who calls in but whom you don’t get to see much until near the end. Welles is convincingly played by Tom Burke.

Mank depicts Hollywood when it was at the height of its power, both on and off the screen, and the dangers of that power. The main narrative at a certain point is the Upton Sinclair gubernatorial election in 1934 California. Sinclair, who is played very unexpectedly by Bill Nye the Science Guy, was a well-respected novelist and socialist, a early example of a “democratic socialist” in the vein of Bernie Sanders. It also covers Mank’s personal experiences with William Randolph Hearst and Marion Davies, of whom he had been a regular dinner guest at Hearst Castle. The power that Hearst could have over state politics is a key theme. 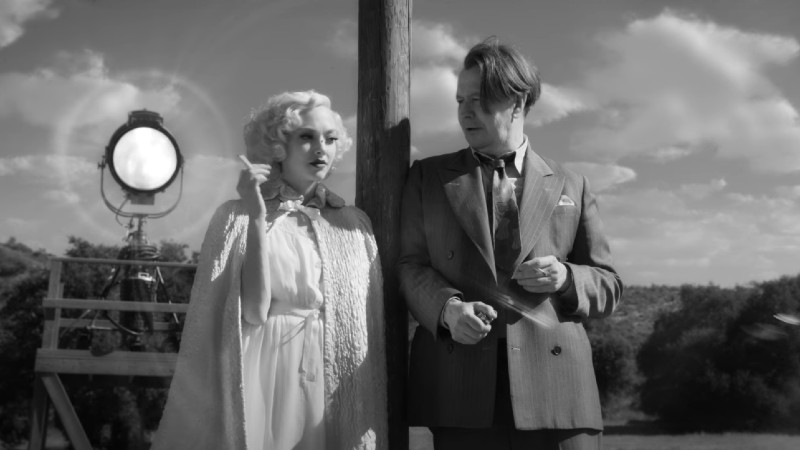 It’s beautifully filmed, digitally. One of the nice touches in Mank is that there are scratches, grain and “cigarette burns,” the latter making a nice link to Fight Club. While the film is the cheapest one Fincher has ever made, he captures the era well. If you look at something like Peter Bogdanovich’s Nickelodeon (1976), although it approaches the look of the ’20s, it doesn’t feel like a film made in that era, whereas Mank manages this trick.

If you see Mank theatrically, the sound is very different to what you hear when watching on Netflix. The mix has this wonderful analogue warm quality in tune with films of the ’30 and ’40s which on my Netflix viewing it lacked.

The performances are all strong, especially Gary Oldman. He brings more to the role because he has had his own problems with alcohol. The character of Mank is an alcoholic, and Oldman turns in a showy performance, as he’s been known to – but it’s not some Oscar-bait like The Darkest Hour (Joe Wright, 2018), it’s actually a good film. Amanda Seyfried is also very good as Marion Davies. She always has these large expressive eyes from a screwball comedy of the ‘30s. She has accepted her fate as Hearst’s mistress, and her career is on the way down.

Both Welles and Mankowitz regretted that everyone thought the character Susan Alexander Kane was based on Marion Davies, but it wasn’t. As Mank shows, and as Welles also said at numerous occasions, they both liked Davies and thought she was a very good actress, unlike Susan Alexander Kane. Charles Dance turns in a good performance as the latest in a long line of people to play Hearst including even Robert Mitchum in a ‘80s TV Movie. Arliss Howard, who has been a good character actor for years, is also fantastic as Louis B. Meyer. He pulls off what a scumbag Mayer was.

It’s very clearly the best film of the year and deserves a very dirty rating, and until its final moments the film is fairly respectful to Welles. It’s not the hit job some have painted it as. Welles was clearly arrogant, and there was definitely a tiff over the screenplay credit. However, while Welles got the best collaborators he could for Kane, if you watch any of his other movies, it’s clearly Welles behind it. While Charles Foster Kane is certainly modelled on Hearst and other newspaper barons of the time, much of the character is Welles himself, especially the part about Kane’s childhood.

The idea that it’s all Mank’s structure is gibberish, too. Welles had already written a play about the abolitionist John Brown that uses the same structural conceit, long before he met Mankowitz. The biggest flaw in the story is that in real life, before Mank went to the ranch to write his draft of the script, he and Welles wrote around 300 pages of notes together. Pauline Kael’s version of reality was based on talking only to people who had a grudge against Welles, and has been thoroughly discredited. But it’s still a great movie, and hopefully the Welles fanatics won’t hate it despite the inaccuracies. It’s a movie about how Hollywood manipulates facts, so keep that in mind.

Mank is on Netflix and in selected cinemas on Friday, December 4th.