"Mostly clean movie"
A watchable American horror still in search of itself, leaves it to up to us to decide whether we see a woman empowered or a victim of objectification - from Arrow Video FrightFest Digital Edition 2

Characters with their backs against the wall are an impulsive hook on which a filmmaker can engage their audience. Playing on or sensationalising a common fear of entrapment and loss of control however, can create a swell of frustration. Directed by Chris Lofting and Travis Cluff, from a screenplay by lead actress Jill Awbrey, Held is a misguided effort, a mix of success and failure. By scratching at a deep social desire for equality and change, they fail to immerse us in the plight of its female protagonist from start to finish. Where they succeed is in creating an effective piece of provocative filmmaking, that asks us to decide how we feel in response.

On their nine-year wedding anniversary, Emma (Jill Awbrey) and Henry (Bart Johnson) are looking to reignite the spark in their relationship. They take a vacation to a isolated luxury rental home, complete with smart house features and integrated security, in an isolated and nondescript part of America. Waking the next morning, they find themselves trapped inside. A voice tells them that they’re being watched, and if they are obedient, they will be able to leave unharmed, but it warns them that disobedience will have consequences. With an intimate knowledge of their marriage, the mysterious voice requests that they role-play the perfect couple, even as fractures in their relationship are revealed.

Hitchcock spoke about how you come in at the last possible moment, and leave at the earliest convenience. Held opens with an unnecessary scene that remains so. The only possible explanations for its inclusion are to tease us about why this is happening to Emma and Henry, or because it’s part of Emma’s character development. There are problems with either explanation. The twist isn’t well disguised, and we watch in vain, hoping the film will find a creative way around what we expect will happen. This negates the effectiveness of any attempt to tease us about a possible connection between her past trauma, and their entrapment. Neither is it character development – the only purpose it serves is to position Emma as a victim. The trauma of sexual violence explains her nervous disposition, but when it’s revealed that she has cheated on Henry, it throws our perception of her character into conflict.

A scenes necessity is decided by the story being told, and a comparison of note is Rose Glass’s Saint Maud (2019), which begins with a brief flashback into the character’s traumatised past. It’s a teasing look into the reason for her religious conversion, and forms a narrative that reflects on the theme of faith as solace. Lofting, Cluff and Awbrey fail to build on Emma’s opening trauma, and they only complicate matters by presenting her first as a victim, then as an adulteress. Ironically, given who has written the screenplay, Emma is symbolic of the genre’s habitual nature to brutally use women as an object for suffering, either sexually violated, or as a punishment for their sexual choices and indiscretions. 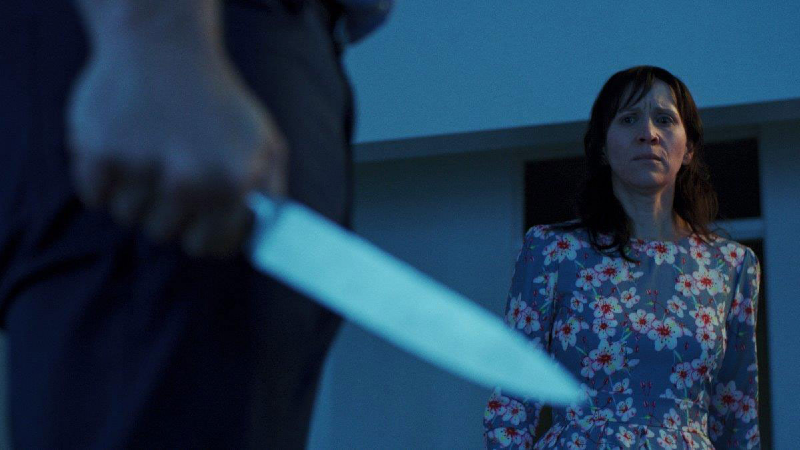 Eventually, control becomes the core theme of the film, showing little restraint in its patriarchal rhetoric. Women are objects who belong at their husband’s side, and it’s he, the man who controls the marriage. Women must be obedient and show their husband love. Held’s male characters and not the film attack gender equality, and dismiss it as misguided political correctness.

The story space, especially in genre and horror cinema plays to nightmare scenarios. In this context, Awbrey’s story is a nightmare, a push back against the deep social desire for equality and change. Emma, like so many women before her, notably the ‘final girl’ must survive the conflict into which she is thrust. This asks questions about female empowerment and strength through genre cinema. Is the only way a woman can be empowered through violence? If it is, then it’s not an exception. The western genre is all about strength and empowerment through a propensity for violence, by overcoming the antagonist’s violence.

While the conflict between the social and the anti-social remains timeless in the western, even if it is male dominated, a woman subjected to male oppression and violence in horror cinema complicates matters. Lofting, Cluff and Awbrey’s nightmarish push back should be uncomfortable because compared to slasher films, it has a heightened self-awareness of gender politics. Held relies on one’s own interpretation of empowerment through violence and suffering. It leaves it to up to us to decide whether we see a woman empowered or a victim of objectification.

The inability to disguise the twist compromises the film and never allows the truth of what we witness to be exposed. It’s a moment that would flip what we’ve seen, throwing up uncomfortable questions about control and violence that have moral ramifications. Held is watchable, but it feels as though it has been abandoned by its writer and directors. In this final cut, it’s still in search of itself as either a simple genre picture, or under more studious authorship, something more thoughtful.

Coppola and Murray reunite and engage with the trials and tribulations of human nature, in a movie that's both funny and meaningful - on Apple TV+ from Friday, October 23rd (and also showing in selected cinemas) [Read More...]

This hagiographic feature commemorates one of the most astonishing photographers in his field, but how does his work match up to modern standards? On Curzon Home Cinema and Digital on Friday, October 23rd [Read More...]