Germany has a curious relationship with its non-white residents. You can be third or fourth-generation in the country, and still be referred to as an Ausländer (foreigner). Yet, connecting with your supposed homeland can be a perilous task if you have grown up in Germany your whole life. No Hard Feelings, centring around the experiences of a gay Iranian-German in a small town near Hanover, deftly explores this theme, providing a fresh, intersectional take on the coming-of-age story.

Parvis (Benny Radjaipour) is an aimless young man, who begins in the film in a gay club, stealing a bottle of champagne and hooking up with whoever will have him. His parents, Iranian exiles who run a supermarket, are disappointed in him, not necessarily because he’s homosexual, but because he has no real purpose in life. This changes when he’s suddenly forced to work in a refugee centre.

The job is surprisingly tough. When he is tasked with translating the Farsi of a woman scheduled for deportation, he can barely understand her regional accent. But this experience gives him an eye-opening insight into the plight of his fellow ausländer, who may not have German citizenship but share the discrimination he feels. These feelings come to the fore when he falls for the Iranian refugee Amon (Benny Radjaipour) and makes friends with his sister Banafshe (Banafshe Hourmazdi). 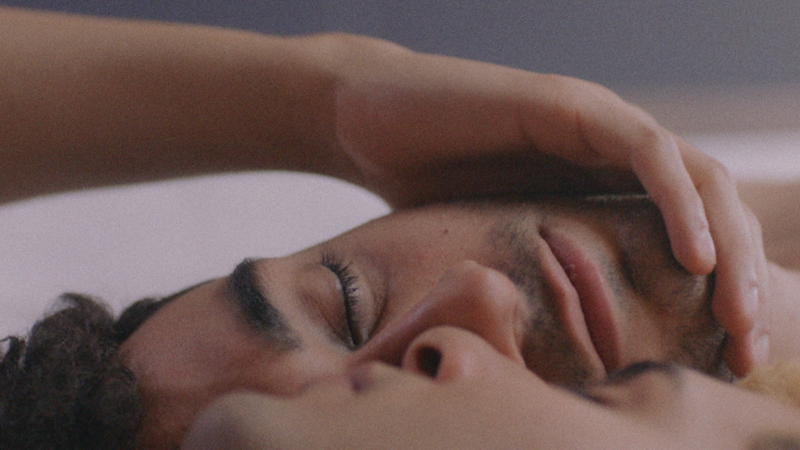 No Hard Feelings deserves credit for the way it weaves systematic racism within a queer coming-of-age tale. For example, after a refreshingly graphic hook-up with an older white German man, he is immediately singled out by his race — the other man saying that he normally doesn’t go for hairy südlander (a term that usually refers to anyone dark from Balkans, Greece, Turkey and the Middle East), but that Parvis shouldn’t worry, as he “isn’t hairy”. The racist insult rolls off the tongue in such a way that the speaker has no idea that he’s being offensive, showing how embedded and unquestioned such views can be within German culture. Yet, among the refugees, also homophobia runs unchecked within the Arab/Iranian community, director Faraz Shariat skilfully aiming shots at both side of the cultural divide.

Utilising an Instagram friendly aesthetic, with a square frame and a popcorn-pastel colour palette, the style of the movie reflects the expressive nature of its characters. Stagier moments, scored to electronic music, contrast against the hand-held naturalism of dialogue or sex driven-scenes, showing both the world as these young people imagine it (or might stage it on their phone) and the way it really is. Later scenes of intimacy are shot with much more focus on emotion, later giving one of the best contrasts between merely shagging and actually making love.

While the scenes don’t flow together to create maximum effect, with random inserts or fantasy-esque sequences often undercutting the impact of the story, the style of No Hard Feelings asserts the strong sensibility of debut writer-director Shariat.

No Hard Feelings is out on Digital on Monday, December 7th.

Just how dirty and queer will Fringe! get this year?

It's finally that time of the year when an explosion of transgressive and progressive queer cinema hits East London; DMovies had a chat with the Fringe! Queer Film Fest team and they have revealed all their dirty secrets... [Read More...]