"Dirty gem"
François Ozon captures the spirit of 1985 in a tale of a doomed young romance that outshines the summer sun - in cinemas Friday, October 23rd.

Meeting the right person at the right time can cause both parties to flower and grow. Enter 16 year old Alexis Robin (Félix Lefebvre), beginning his school holidays on the pebbled shores of Calais. Affable but perhaps a little reserved, he is at a crossroads between continuing education or finding his place in the world of work. Over the course of a single day, Alexis is catapulted into an intense friendship with self-possessed David Gorman (Benjamin Voisin). With a couple of years seniority, David captivates Alexis with lingering eye contact and physical interaction that hints at something more. The pair exhibit more electrochemistry than a 12-volt car battery and romance quickly follows. Both are transformed by their encounter, with Alexis blossoming with newfound confidence at their union and David finding succour following the recent passing of his father.

However, even in the midst of a perfect summer, the spectre of autumn looms to threaten the leaves of new growth. Imminent tragedy is explicitly telegraphed from the get-go and the film jumps between the bright summer days and a grey, washed-out future. Too often films are ruined by divulging their coming flashpoints ahead of time but Summer 85 manages to circumvent this issue; alternating timelines are used to great narrative effect. Easy and free with their public displays of affection, the potential difficulties of being gay in the 1980s are dropped in favour of showing the sincere moments of unbridled joy at the centre of their relationship. This honest beauty is enough to quell any sense of foreboding and gradually enables the audience to understand just why the principals become so very distraught. The sweet innocence of their young love is further maintained by their various acts of consummation kept private and offscreen. 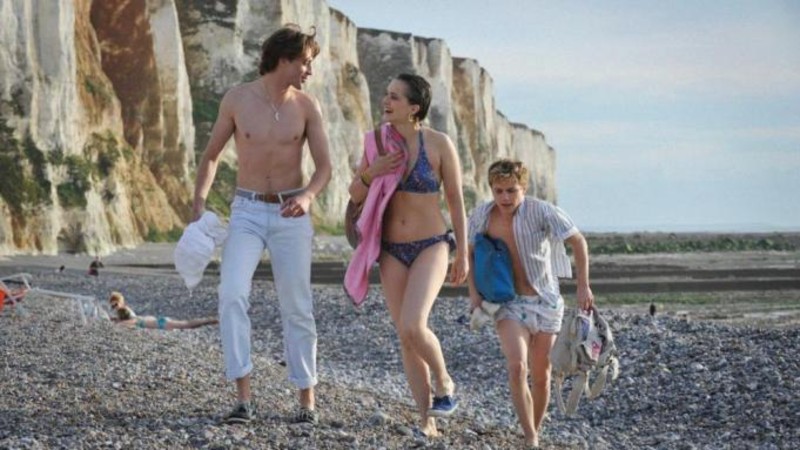 The film lives and dies by its admirable leads. Lefebvre projects the brightness of his youthful potential well at first and does a great line in winsome smiles. The later heel turn into despondency is also capably managed and there is a sensitivity to the whole performance that carries Alexis’ supposed promise as a writer. Voisin brings the energy and swagger of a Point Break (Kathryn Bigelow, 1991) era Swayze and this momentum believably sweeps up Alexis in its wake. Brief glimpses emerge of David’s pain at the recent loss of his father, elsewise alluded to by his similarly broken mother (Valeria Bruni Tedeschi) who has been resorting to strong medication in order to cope with the untimely death. Madame Gorman has been running the family fishing supply store with just David to help and Alexis is welcomed into the fold as she sees the beneficial effects of their ‘friendship’.

Impressive set design, music choices and sourcing of garish clothing neatly captures the spirit 1985, helped along by the graininess of 16mm film. Likewise, Summer 85 hits all the recognisable markers of a classic 1980s’ teen movie: a neon-lit fairground, cinema smooches, a supportive schoolteacher opposite emotionally unavailable parents, summer jobs, bedrooms wallpapered with magazine posters and copious amounts of double denim. This kind of reductivism doesn’t do the film justice however, with a remixing the elements into something fresh. Besides, the sailing skills that are apparently instilled in every Calais teen brings an entirely different freedom to John Hughes’ outings. Call Me By Your Name (Luca Guadagnino, 2017) is another obvious touchpoint but the earlier acceptance of desire allows the film to explore different ground with Ozon’s compelling directing. Not a single frame of the 100min runtime outstays its welcome and a cathartic culmination lets the audience end the return to a half-remembered summer triumphantly. As the seasonal tones shift from lush to dark, the promise of next spring can be felt.

Summer 85 premiered at the San Sebastian Film Festival, when this piece was originally written. It is also showing at Curzon Camden Market until September 30th. In cinemas (on general release) on Friday, October 23rd.