"Dirty gem"
This hagiographic feature commemorates one of the most astonishing photographers in his field, but how does his work match up to modern standards? On Curzon Home Cinema and Digital on Friday, October 23rd

Everyone has an opinion about how women should act these days. If you ask Julie Bindel, she’d call the act of surrogacy an act of patriarchal oppression; if you ask Cardi B, she’d describe her newest hit single WAP as her purest act of femininity; and if you ask Russell Brand, he’ll mumble about the “actions of women in the gaze of men”, in various forms of undress. And it is in this changing landscape that we watch Helmut Newton’s work open to delirious and derisive eyes. Newton conjured (yes, yes), whole portraits of women, dressed in their most intimate guises.

A landscape artist, Newton covered his subjects with the contradictions, colours and shapes their naked forms best espoused. Depending on your prerogative (mine will go un-aired), Newton either liberated his subjects, or subjected them to his liberal fantasies. Director Gero Von Boehm is reluctant to offer his audience any concrete answers, instead leading viewers to impart their opinions on the process itself.

Straight from the beginning, the film lunges into the deep end with wild, wonderful abandon. Newton directs a model -her breasts angled directly to the camera’s shifting eye – as to how best she should convey the emotion needed to sell the “scene”. She bows to his every command, capturing a primacy that millions of models have exhibited in the many art forms exhibited around the world. 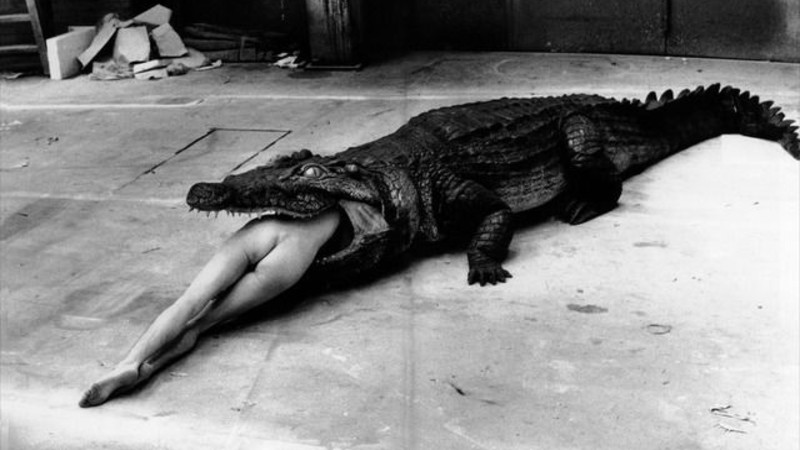 Newton, whose work developed from intuitive feeling, had a work ethic that better resembled an artist than a craftsman, and the detail that runs through each and every portrait shows a master committed to their work. Vogue editor Anna Wintour considered his art a contrast to the beauties that splashed all over her pages; vocalist Grace Jones thought his perversion matched her own; while Marianne Faithfull- a chanteuse who had watched the steamy 1960s through the vehicles she rode with The Rolling Stones – felt he showed her true self with nothing but a leather jacket to cover her.

Amidst the dazzling panoply came two photographs which shocked viewers with their resolve. The first decorated viewers with an assortment of wheelchair apparatus, while the second posed Isabella Rossellini in an uncomfortable stranglehold. Rossellini, impressed with David Lynch’s singular talent, understood the emblem as an artist in their director’s hand, but the violent imagery proves hard to reconcile for a generation calling out for a more considerate Hollywood.

And yet, complaints are few and far between for the artists. Jones admires the photographer’s resolve to cover her most private areas with shrewd, stern effect. It was a man who captured the models on film, but it was the subjects who brought life to the stills. Newton, who died in 2004, is represented by virtue of his wife, and the film predominantly features women as central players, producers and performers. It’s not my place to call this documentary a feminist statement, but it certainly adds to the growing conversation.

Helmut Newton: The Bad and the Beautiful is available on Curzon Home Cinema and Digital on Friday, October 23rd.