"Greasy movie"
Coppola and Murray reunite and engage with the trials and tribulations of human nature, in a movie that's both funny and meaningful - on Apple TV+ from Friday, October 23rd (and also showing in selected cinemas)

When Laura (Rashida Jones), a young New York wife and mother doubts her husband Dean’s (Marlon Wayans) fidelity, she confides in her larger-than-life playboy father Felix (Bill Murray). Encouraging her to pursue her suspicions, she and her father tail her husband and play amateur sleuth.

Director Sofia Coppola and actor Bill Murray reunite after first working together on Lost in Translation (2003). It’s also a return to the idea of characters reaching a crisis point in their lives, that forges a connection between Murray’s fading movie star in the Park Hyatt, Tokyo, and Jones’s New York writer.

Every story is about connections, if only because characters lives are impacted by the cause and effect of not only their own individual choices, but those of others. Coppola is drawn to the idea of connection and disconnection with a more deliberate intention than just characters arbitrarily impacting one another’s lives. The fading movie star Bob, whose marriage is in crisis, and Jones’s writer struggling with a mental block, is a subtle touch of perhaps unintentional awareness. In stories, whether it be a script or a book, the life of the character is laid out, whereas everyday life is a series of arbitrary, instinctive, even confusing choices.

Both films are about the fragility of connections, that specifically touch on themes of the longevity of marriage and monogamy. In each film Murray’s characters are unfaithful, while Scarlett Johansson and Rashida Jones’s characters both look to their future with uncertainty. 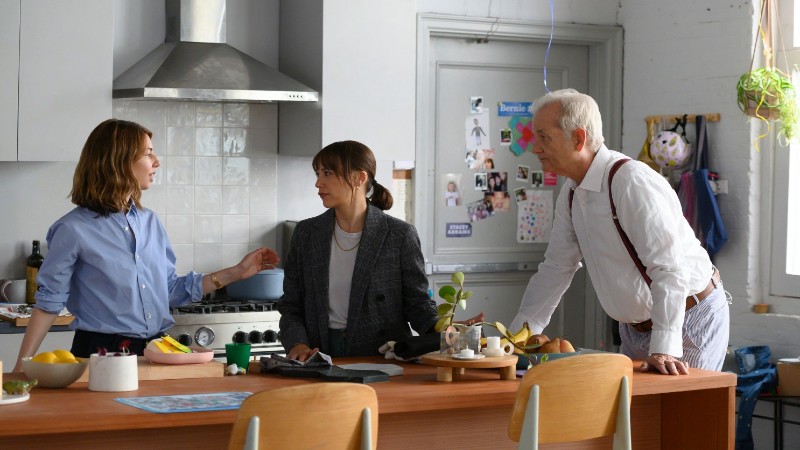 Coppola and Murray reuniting offers a temptation to overlook the connection between On the Rocks and Somewhere (2010). Stephen Dorff’s divorced movie star reconnecting with his daughter Cleo (Elle Fanning), echoes the theme of the longevity of marriage. Felix and Laura’s escapades, during which she questions her father about his infidelities, echoes the nurturing of a father-daughter bond in the earlier film.

The themes of connections and disconnection are not only present as themes and ideas in Coppola’s films, but they give a context to her filmography. On the Rocks is a return to a more energised storytelling, following the restrained energy of The Beguiled’s (2017) emphasis on sexual repression. The energy of the comedy in On the Rock’s connects to the vivacious side of Lost In Translation, when Murray and Johansson go out on the town one night, but contrasts to its contemplative nature. It also contrasts to Somewhere’s slower-paced energy. What we find with Coppola’s latest film is a mix of connection, and not necessarily disconnection, but the contrast in tone of the storytellers voice.

The dynamic of the actors in a comedy determines whether the film lives or it dies. Murray and Jones’s rhythm is impeccable, the glances and gestures complimenting the humorous back and forth dialogue. Coppola shows an understanding of how to temper the comedy. She picks her moments when to transition from eccentricity to absurdity, that does not undermine the serious themes and emotions that lie beneath its playful exterior.

On the Rocks is a film that knows how to have fun, and package up weightier ideas. We may laugh along with Felix and Laura’s escapades, but this is a story that on a deeper level reflects on how the natural desire to be wanted can create a struggle with the journey of a relationship as lust tames. It’s also about how fear provokes disconnection, the need to talk, and to be cautious thinking we know how someone sees us or how they feel. On the Rocks engages with the trials and tribulations of love and human nature to be not only be remembered for the laughter, but for having something truthful to say about imperfect beings daring to love.

On The Rocks is available on Apple TV+ from Friday, October 23rd. It’s also showing in selected cinemas.