"Dirty gem"
Extraordinary profile of Imelda Marcos, dubbed the "Marie Antoinette" of the Philippines due to her extravagant plundered wealth, is now available on VoD

There’s one word you never hear in documentary The Kingmaker: “sorry”. Profiling the rise and fall and potential rise again of Imelda Marcos — former First Lady to the brutal dictator Ferdinand Marcos — it’s quite extraordinary that she still can’t see the consequences of her actions. This is a woman who assumes that she has done nothing wrong, determined to restore her family to their former glory.

Lauren Greenfield follows her for three years, providing a mixture of historical footage, talking heads and fly-on-the-wall campaigning as her son Bong Bong runs for Vice President. The result is truly compelling; kind of like The Act of Killing (Joshua Oppenheimer, 2013) without the catharsis, a deadly warning that vast amounts of money has the ability to wipe away the sins of the past.

It begins with Imelda driving around the slums of Manila, handing out wads of cash to begging children and mothers. They know her by name, suggesting that this is a common occurrence. She later visits a children’s hospital built during her husband’s administration and complains that it looks nothing like it used to be. She hands out more money to mothers with dying children. The self-proclaimed “mother” of the Philippines and the world, the late octogenarian wants to be in charge of the country again. The question is how much cash should be handed out to make this a reality.

You’d think she’d know when to shy away from the limelight. Ferdinand established a deadly coup in the early 70s to consolidate power, killing thousands of people and torturing thousands more. Meanwhile, the family plundered the wealth of the country, holding the Guinness World Record for Greatest Robbery of a Government. She was a great believer in beautiful things, dubbed the “Marie Antoinette” of the Philippines due to her love of extravagant jewellery and her collection of over 3,000 shoes. Still, if you have vast wealth, anything can be possible. With the Marcos’ fortune estimated to be around $30 billion, and many in the country nostalgic for Ferdinand’s administration, they still possess the immense power to get things done. 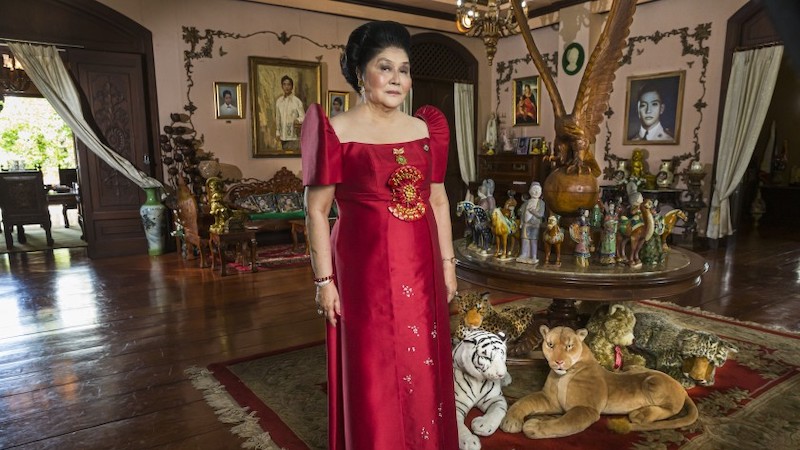 Lauren Greenfield has scored a real coup here. Simply put, you’re unlikely to see a more fascinating subject interviewed all year. She would be a sympathetic figure if all you heard was her side of the story, yet Greenfield needfully speaks truth to power: she allows Marcos to say what she pleases, undercutting her lies by bringing in the testimony of activists, journalists and opposing politicians. It is the very opposite of Oliver Stone’s The Putin Interviews (2017), which albeit fascinating in their own way, inadvertently made the Russian leader seem even stronger. The depressing part is that nothing in this film will actually make a difference; it only lets us observe as the country struggles in vain to stop history from repeating itself.

And it probably will: Bong Bong narrowly missed the Vice Presidency in 2016 by just 0.64% of the vote to Leni Robredo. He appears to be a nice man, but he still cannot find a way to apologise for his father’s actions, even venerating him as a great figure. Yet they have an ace in their pocket with strongman Rodrigo Duterte’s presidency, which was partly funded by their money. Duterte and his Vice President Rebredo — who was elected separately — do not get on, with him stating that he wants Bong Bong to be Vice President with the expectation he will step down and let Bong Bong replace him. In The Kingmaker, the raw power of money has rarely looked so strong.

The Kingmaker is out in cinemas across the UK on Friday, December 13th. On VoD in March.

Mega-rich, vulgar and grotesque: meet the people with more money than sense, and who unabashedly embrace and brandish their superlative lifestyle - now available for digital streaming [Read More...]

Five years in the making, Adolescentes is a remarkable achievement, charting two very different girls from 13 to 18 as they grow into maturity - on Mubi on July 9th [Read More...]