"Dirty gem"
Five years in the making, Adolescentes is a remarkable achievement, charting two very different girls from 13 to 18 as they grow into maturity - on VoD on Friday, January 15th

Charting the lives of two girls from thirteen to eighteen, Adolescentes is an immersive documentary depicting the vicissitudes of youth. Five years in the making, filmed twenty-four days a year and composed from 500 hours of rushes, it has the flow of a fine naturalist drama, standing nicely alongside Young Solitude (Claire Simon, 2018) and Belinda (Marie Dumora, 2017) as yet another brilliant French documentary about the complexity of growing older.

On first glance Emma and Anaïs seem like very different girls. Emma comes from an affluent background, loves to sing songs from musicals and appears very driven, while Anais is from a poorer background, gets distracted easily and finds it hard to concentrate in class. Right from the start, we learn that education is the main priority, both girls told by their teachers that the way they act in school could easily shape their whole life.

In a traditional feature, the differences between the two girls and their respective outcomes would be more pronounced, but director Sébastian Lifshitz has something much subtler in mind. In real life people cannot be put into boxes, meaning that A rarely leads to B or even C. In keeping with this thesis, little is played for dramatic effect, purposefully stopping the viewer from ever making concrete predictions about these girl’s fates. Omission is constantly used, significant events often only seen before and after and huge swathes of time often passing within the cut of a frame; the audience only learning afterwards that the summer has finished or the school is finally over. 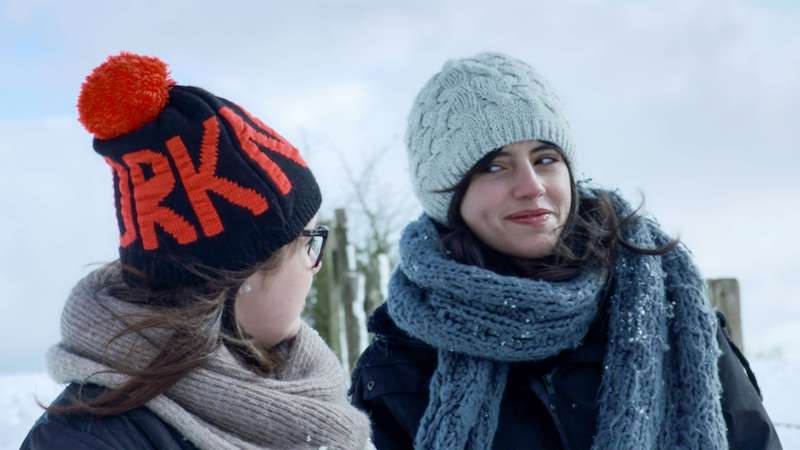 Artificially skipping the so-called most essential moments of each girl’s life makes the film a fascinating, unpredictable watch, yet this mix of objectivity and narrative slipperiness can make it feel like something of an academic exercise. This is especially true when philosophy and literature classes — whether it’s the concept of Skepticism or the story of Emma Bovary — act as a kind of Greek chorus on the action, underscoring its major themes in a way that can feel quite forced. It’s easy to think a lot watching this movie; it’s much harder to feel anything significant.

Things turn more emotive when the personal meets the political, these girls lives often brutally interrupted by key moments in recent French history, from the Charlie Hebdo and Paris attacks to the election of Emmanuel Macron. While these moments could easily have come off as glib, Lifshitz seems to find more to say than André Téchiné in the recent, misguided Farewell to The Night (2019) about the destabilising effects of terrorism upon a nation; a moment of unreality that puts the grand and noble project of education under existential threat. One moment in particular, when Anaïs seems to have changed her political persuasion in the blink of an eye, confronts simplistic political diagnoses head on, showing how the French character is far more complicated than anyone could imagine.

What’s highly notable is the sheer amount of conversation; ranging from the banal (getting the right grades to move up in school) to the profound (how life seems to imperceptibly change without you even knowing it). Whether it’s chatting with each other, arguing with their parents, or listening to the words of their teachers, people talk and talk and talk, never at a loss for things to say. In fact they are so composed and at times so eloquent, one could be fooled into thinking they are watching a scripted drama. Complemented by intuitive editing, the film finds a way to accrue these moments into something both profound and mystifying: asking what defines a person while boldly skipping any definitive answers. The question it seems, is to keep asking.

Adolescents showed at the Locarno Film Festival, when this piece was originally written. It premieres in the UK in October as part of the BFI London Film Festival. Out on Curzon Home Cinema and MyFrenchFilmFestival from Friday, January 15th.