Jojo Rabbit is like watching a sixth form revue whose student cast has just finished the CliffsNotes history of Nazi Germany and decided to play it for self-satisfied laughs. Now, Taika Waititi’s offbeat humour may have worked for Thor but it does not work for Nazism; his shtick is far too lame and toothless to produce anything nearing satire. And this is what Waititi thinks he has made, satire. It is a high-minded ‘anti-hate’ piece aimed squarely at contemporary right-wing populists. A worthy target, many would agree, but this edgeless juvenilia won’t challenge their beliefs for a moment.

The film’s milky satire is doubly disappointing, for the Nazis – both the first wave and their pathetic admirers – are very sensitive to parody. Charles A. Ridley realised this back in 1941, when he edited footage of Nazi processions from Triumph of the Will (Leni Riefenstahl, 1935) to fit the tempo of the Lambeth Walk, which one Nazi Party member had dismissed as ‘Jewish mischief and animalistic hopping‘. When Joseph Goebbels saw Ridley’s film, he was reportedly so furious that he burst out of the screening room – all 5ft 4 of him – and expressed his impotent rage by ‘kicking chairs and screaming profanities’. Alas, Jojo Rabbit is unlikely to rankle the contemporary far-right in such a fashion.

Parody aside, the central conceit of Waititi’s film is a tired morality tale. The story concerns Jojo (Roman Griffin), a 10-year-old boy whose imaginary friend is none other than Adolf Hitler (Taika Waititi). A committed member of the Hitler Youth, Jojo’s fanaticism is challenged when he discovers his mother has given refuge to a young Jewish girl named Elsa (Thomasin McKenzie), who hides in the rafters of the house. What are the odds that Jojo slowly warms to Elsa and sees the inhumanity of Nazism? That’s right, it’s essentially American History X (Tony Kaye, 1998) thrown into a dull stew of Life is Beautiful (Roberto Benigni, 1998) and third-rate Mel Brooks. 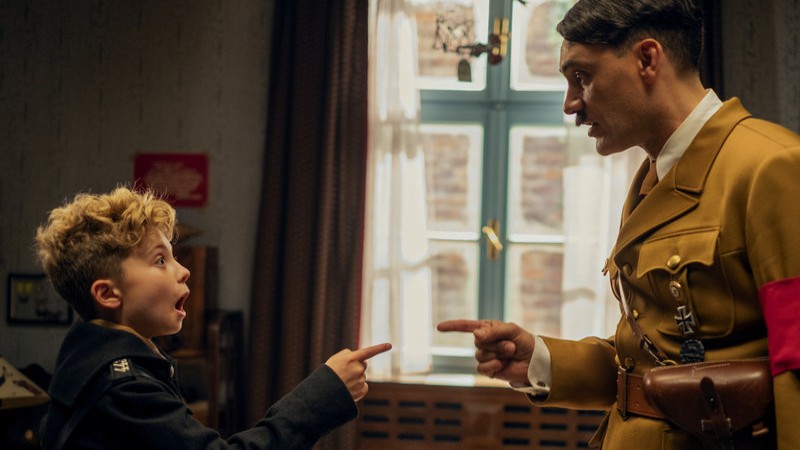 However, trite narratives can be buoyed by strong performances, witty dialogue – all manner of things. But in Jojo Rabbit there is nothing more than a litany of tired jokes and perfunctory German accents, with the worst of all coming from Rebel Wilson – the corpulent comedian of the moment. Negligibly better is Sam Rockwell, who coasts along as Captain Klenzendorf, a washed-up veteran. Waititi himself features as Adolf Hitler, in a performance that may have been daring 80 years ago but still wouldn’t have been funny.

A notably bad cameo comes from Stephen Merchant, who plays local Gestapo leader Captain Deertz. It is Deertz and his men who are most guilty of the film’s tiresome “Heil Hitler” gag, which consists of the characters repeatedly saluting Hitler to each other in a convivial manner. Clearly, Waititi thought this gag was a real winner, for in one scene each man of Geertz’s crew greets Jojo and Klenzendorf with cheeky salutations to the Fuhrer – it is an insufferably naff attempt at parody.

But remember, Jojo Rabbit isn’t just a parody, it’s an ‘anti-hate satire’; it’s here to help, to educate. In an interview with Vanity Fair, Waititi said, ‘there’s a danger we will forget the events of World War Two and there is another, deeper danger that some of those things will repeat themselves.’ 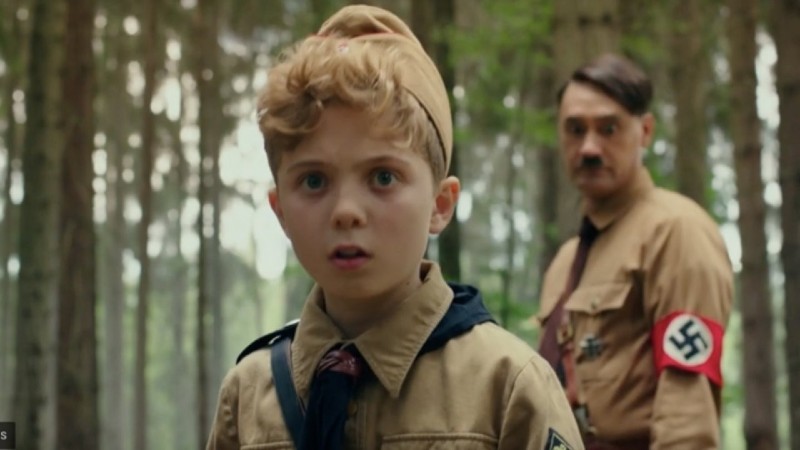 This is an utterly risible statement. How can Waititi expect his film to comment on reality when it bears no relation to it? Jojo Rabbit is a facetious mess that presents Nazi Germany as a wacky pantomime full of goofy caricatures – it couldn’t complement even the most junior history syllabus. After all, the Gestapo did not consist of lanky, bumbling fools; they were sadistic thugs who maimed, tortured and killed – and that should be made abundantly clear to any student of history.

It would be unfair, however, not to mention the few, minor strengths. Scarlett Johansson gives the best performance as Rosie, Jojo’s mother. She has a ballsy eccentricity that steals several scenes, especially one in which she pretends to be Jojo’s absent father. There’s also Yorki played by Archie Yates, who shows a knack for dry humour that could bode well for the young actor.

But make no mistake, Jojo Rabbit is an abject failure. With its witless script laced with cringeworthy modern slang, you’ll find sharper humour in a YouTube Downfall (Oliver Hirschbiegel, 2004) parody. And as a commentary on racism, there is more satire in five minutes of Django Unchained (Quentin Tarantino, 2013) than the entirety of Jojo Rabbit. Waititi said that his film will ‘piss off a lot of racists’, but with an offering this milquetoast I’m afraid that’s just not going to happen.