"Greasy movie"
A middle-aged white woman and a young black man working at the local cinema fall in love, in Sam Mendes's ode to the movie theatres of yore - in cinemas Monday, January 9th

Set in a medium-sized English coastal town in the years of 1980 and 1981, Empire of Light transports viewers back to a time when movie theatres were just beginning to collapse. This degradation is superbly epitomised by the titular cinema, a grandiose building still glitzy on the first level, where an elegant lobby, fitted with burgundy carpet and intricate wooden walls, leads to the two functioning screening rooms. The upper half of the building, on the other hand, is the picture of decadence: two abandoned projection screens and a large lobby with tables overlooking the seafront are mostly inhabited by pigeons. The Empire Cinema is the real-life Dreamland Cinema, part of an old-fashioned, vaguely precarious and yet still functioning fairground of the same name (the fun rides are also briefly featured in the movie)

The unidentified town is Margate, on the Isle of Thanet in in Southeastern England, a place that is indeed bewitchingly decadent, a present-day town that looks exactly like Britain 40 years ago. This was presumably a requirement, since the film was made on 35mm and therefore without CGI. The movie theatre isn’t the only old-fashioned building. A concrete high-rise council block, grey and ugly as a stormy sky, serves as housing to one of the protagonists. The outcome is a cinematography bursting with nostalgia and yet entirely palpable, the first one of Empire of Light‘s biggest achievements.

The story revolves around around cinema duty manager Hilary (Olivia Colman). She is a charge of a troupe of colourful employees: usher Neil (Tom Brooke), projectionist Norman (Toby Jones), heavy make-up wearing, Siouxsie and the Banshees loving Janine (played by Hannah Onslow; whose function I could never work out), new ticket collector Stephen (Micheal Ward), and others. Hilary has a sexual relationship with the theatre’s owner, a cranky 60-something married man called Donald (Colin Firth). Their carnal interaction is entirely devoid of tenderness and intimacy, with a grimacing Hilary bending over her boss’s desk.

One evening, Hilary still a kiss from the young, handsome – and black – Stephen. The two quickly develop a romantic bond, spiced by steamy sex on the abandoned lobby overlooking the seafront. But the pigeons aren’t the only ones to witness their actions. Neil warns Hilary that she should be more cautious, as more people could find out about her newfound romance. Hilary and Stephen have to overcome two barriers in order to be together: racism and ageism. The former shows its ugly teeth in the shape of a bigoted cinema-goer and, more significantly, in a far-right, skin-head motorcade/rally just outside the cinema. The latter is a sentiment intrinsic to both lovers. Hilary realises that their age gap could hinder their relationship, and challenges Stephen whether he is embarrassed of her. 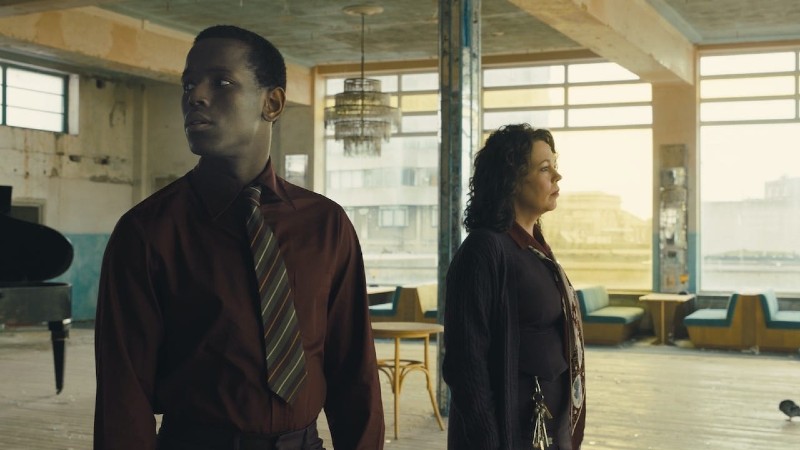 Empire of Light‘s second biggest achievement is Colman’s performance. She blends female desire with anger to perfect results. Hilary is resolute and yet clumsy and dysfunctional. She finds vey unorthodox ways of achieving her objectives. This will often land her in trouble with the social services, and at the mercy of mental health doctors. She is consistently prescribed lithium, a drug widely used at the time as an anti-depressant and also a mood stabiliser. The story climaxes during the gala screening of Chariots of Fire (Hugh Hudson, 1981), a British historical drama also dealing with the topic of racism (namely: anti-semitism) set in the nearby coastal town of Broadstairs (incidentally, one scene of Empire of Light is also filmed there).

The film’s soundtrack provides a snapshot of the music scene at the time, with songs Joni Mitchell, Bob Dylan and Siouxsie being played by our characters. There are allusions to ska and black music. The music score is fairly sentimental and cutesy, and I was surprised to find out that it was signed Trent Reznor and Atticus Ross. The sounds of Empire of Light and tot even remotely reminiscent of the Nine Inch Nails act, which the two artists form.

Despite the vintage cinematography and Colman’s performance, Empire of Light is not a masterpiece. A dull script, penned by Mendes himself, prevents both the romance and the racial issues from developing full-blossom. The final quarter of this 115-minute, highly ambitious drama is mostly redundant, with the story dragging on for longer than needed. It doesn’t say anything particularly new and audacious about love and politics. In fact, the film is timid in challenging the very prejudices that it set out to do in the first half. This is partly because the chemistry between Colman and Ward is lukewarm, and also because the movie never proposes a resolution to their unrequited relation. The ending is lifeless and cold.

Empire of Light is in cinemas on Monday, January 9th.

Inspired by the stories of his grandfather, Sam Mendes has made the biggest and best First World War film of the 21st century - now also available on Netflix [Read More...]