"Dirty gem"
Inspired by the stories of his grandfather, Sam Mendes has made the biggest and best First World War film of the 21st century - now also available on Netflix

When the trailer for 1917 debuted, it bore a similar aesthetic to Dunkirk (Christopher Nolan, 2017) – not an entirely bad thing, but not the preferred style, either. I had shared the minority view that Nolan’s film was, in the words of The Guardian’s David Cox, ‘bloodless, boring and empty’. The menace and spectacle of its opening quarter petered out into litany of tepid peril overcast by Hoyte van Hoytema’s gloomy cinematography.

Thankfully, 1917 makes a quick break from these facile similarities with its tight pace, raw emotion and staggering camerawork. It is one of those rare films where, as a reviewer, you risk getting stuck in a rabbit hole of superlatives – so here goes it.

Firstly, the performances, though good, are not what drive this film. It is instead an intensely sensory experience that demands to be seen on the biggest and best system. Roger Deakins’s masterful camerawork bobs and weaves through the trenches of the Western Front in seemingly one unbroken take, capturing the men of the British Expeditionary Force with a visceral fluidity. After ten years of excellent cinema, 1917 will be counted amongst the decade’s most impressive and absorbing. 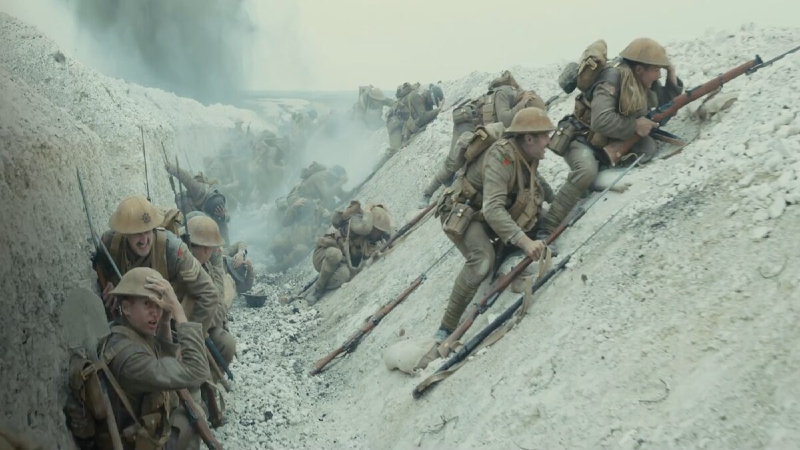 Everyone in this film is under overwhelming pressure – few more acutely than Lance Corporals Blake (Dean Charles Chapman) and Schofield (George MacKay). The young men are ordered to carry a message across enemy territory that will prevent a British battalion of 1,600 men, which includes Blake’s brother, from charging into a death trap.

Chapman and MacKay both give strong performances. Blake is a chipper lad given to jocular anecdotes and crude jokes, while Schofield, apparently the more experienced of the two, has developed a war-weary reserve. There’s a mutual respect and affection for each other, though, and their extraordinary experiences only makes their bond stronger.

This tight, simple premise and character dynamic sets the stage for one of the most remarkable portrayals of combat in recent memory. It may not have the thematic depth of Paths of Glory (Stanley Kubrick, 1957), but Mendes conveys the all-consuming stress, misery and exhaustion of total war. Many of the men Blake and Schofield meet are in varying depths of hate and prostration, but most are driven by a stoic resolve to keep moving forward, whatever their dismal fate may be. 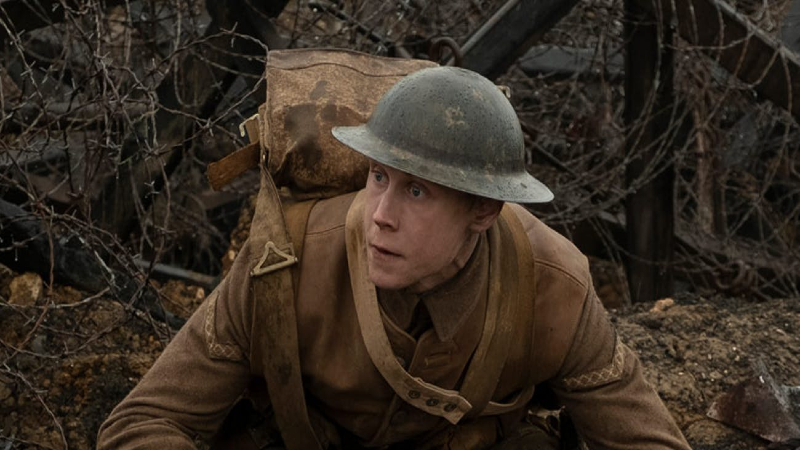 Key to the film’s immersion is Dennis Gassner’s epic set design. We follow the troops as they traverse yard after yard of dank trenches, and the scope becomes even more grimly arresting when they scale the parapet, entering a vast, ghoulish wasteland of sodden craters, splintered trees and mangled bodies. Indeed, there are moments across No Man’s Land that resemble the body horror of David Cronenberg; the attention paid to the grisly details of death and decay is disturbing as it is appropriate.

Inspired by the stories of his grandfather, director Sam Mendes and DOP Roger Deakins have made the biggest and best First World War film of the 21st century. This is important, because for better or worse, cinema has the power to reinvigorate history, to spread knowledge and awareness. After all, the First World War has been overshadowed by the conflict that followed, with its clearer moral compass and even greater level of destruction. Mendes’s film, while not a depiction of the war’s terrible stalemate, will nonetheless assault one’s senses and give them some idea of what their forebears endured in Britain’s deadliest war.