"Dirty gem"
Greek director delivers auspicious drama set in Britain 300 years ago about social climber attempting to become the Queen's advisor, but the film lacks the dirty genius of his early works - in cinemas from Saturday, December 29th.

The maverick Greek director of Dogtooth (2009) makes his third English language film and his first period costume drama. The Favourite is loosely based on early 18th century historical record. Queen Anne, the last of the Stuarts who was beset by health issues, had some 17 pregnancies including many miscarriages and no heir surviving beyond the age of 11.

Her smart and shrewd childhood companion and friend Lady Sarah Churchill did much of Anne’s thinking for her, pushing her to support the merchant class political party the Whigs rather than the landed gentry party the Tories. The Whigs demanded support for a war against the French, while the Tories were resistant to the heavily increased taxes which funded the war effort at their expense. The relationship of Lady Sarah to the Queen was undermined by the arrival of maidservant Abigail Hill, a ruthless member of the gentry whose family had fallen on hard times and who was determined to fight her way back up the social ladder at any cost. 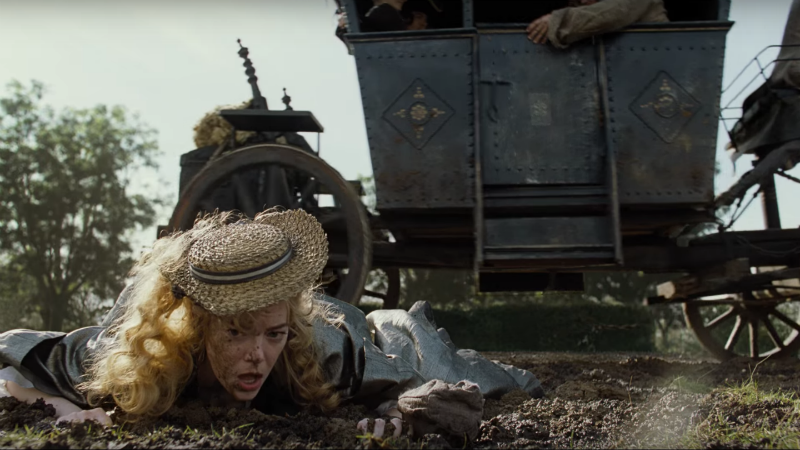 If that outline is true to the facts, the screenplay fashioned upon their foundation by Lanthimos and screenwriter Tony McNamara seek to explore less the historic detail of what actually happened and more the power dynamics of the three women involved. Olivia Colman is magnificent as the shy and vulnerable Anne who nevertheless wields absolute power as monarch. Rachel Weisz makes a fearsome Lady Sarah, whether the powerful manipulator seen at the start or the hideously disfigured victim of a riding accident she becomes towards the end as events turn against her. Emma Stone as the social climber Abigail however seems to be playing the same empowered woman character she always plays.

There’s a strong if historically contentious sexual element, with Lady Sarah the Queen’s clandestine lover until Abigail, who initially ingratiates herself with both Anne and Sarah by using a herbal paste to relieve burning sensations in the bedridden Anne’s legs, replaces Sarah in Anne’s affections. Further intrigues involve the English two party Parliament in the story’s background. Foppish opposition Tory leader Robert Harley (Nicholas Hoult, the memorable psychotic from George Miller’s 2015 Mad Max: Fury Road almost unrecognisable under a lengthy, light coloured wig) senses Abigail working her way into the Queen’s favour and wants to recruit her to spy on Lady Sarah and Anne. Although a fringe character, he is more pivotal to the action than his rival the government’s Whig PM Lord Godolphin (James Smith) who the Queen, under Sarah’s influence, supports. 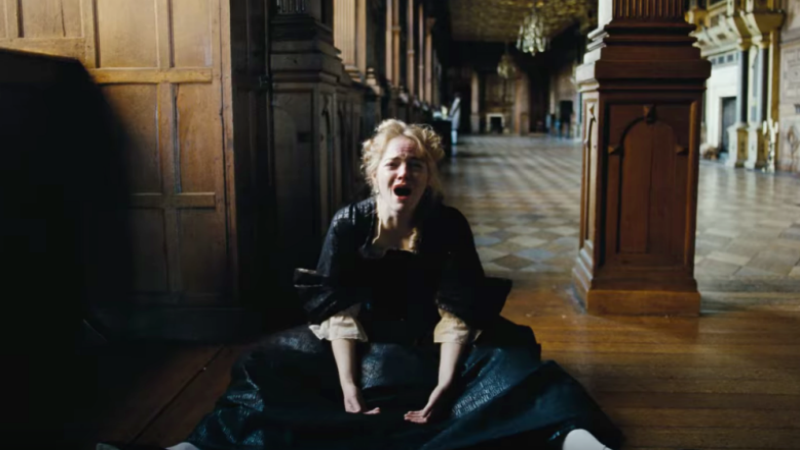 Apart from Stone’s arrival where she’s literally pushed out of the carriage into the shit on the ground, her excursions into the forest to collect ingredients for a herbal paste to ease a painful condition on her arm and scenes of Lady Sarah outside shooting and riding, the proceedings play out within the confines of Anne’s vast palace – kitchens staffed with cooks and maids, lengthy corridors with footmen, the Queen’s vast bedchamber which is also a well-stocked library.

Cinematographer Robbie Ryan frequently shoots from bravura angles although his slavish use of Kubrickian reverse tracking shots is less than original and while the overall look and feel of the piece echoes Barry Lyndon (Stanley Kubrick, 1975), it lacks that film’s rigorous discipline and doesn’t similarly immerse the viewer in its eighteenth century world.

Lanthimos still hasn’t bettered his earlier, homegrown Greek films like Kinetta (2005) and Dogtooth (2009) both of which not only present strange and unfamiliar worlds to the viewer but also completely immerse him/her in them. Those promised a maverick artist on a par with the likes of Lynch and Cronenberg, on which promise his bigger budget, English language movies (The Lobster, 2015, The Killing Of A Sacred Deer, 2017) haven’t to date delivered. As with those films, while there’s much to admire in The Favourite, it still fails to achieve those qualities of Lanthimos’ early films that marked him out as destined for greatness.

The Favourite is out in the UK from Saturday, December 29th. Watch the film trailer below:

Whining and wailing are futile! The Greek director of Dogtooth and The Lobster returns with an unforgiving tale of sacrifice, with his usual absurdist streak - finally in cinemas! [Read More...]