Leda (Olivia Colman) is a middle-aged woman holidaying on her own on a Greek island. She’s supposed to be working, but though she’s on her own she finds herself increasingly involved with a family of American Greeks. At first, she is repulsed by them. They’re very noisy and rude, and when she is asked if she can move her beach umbrella she obstinately refuses. However, she is drawn to the young mother Nina (Dakota Johnson), whose daughter Elena goes briefly missing. The relationship gets closer as Leda finds the young girl and returns her to her parents. The little girl has triggered something in Leda’s memory and we see flashbacks of her as a young mother (Jesse Buckley) struggling to balance her burgeoning academic career with bringing up her two young daughters.

Gyllenhaal, who also wrote the screenplay, skilfully moves between the two timelines, gradually revealing more information and removing layers to reveal emotional strata. Her camera is frequently close to the faces and bodies, watching intently and intimately at people in their most unguarded moments. It has the urgency of a John Cassavetes film, sensitive and alert to the changing weather of the human face. The present day Greek section feels like almost a horror movie, with Nina’s family menacing and at times directly threatening Leda. It doesn’t help that for some reason Leda has stolen Elena’s doll. She is warned by the Irish beach worker Will (Paul Mescal) that they are simply ‘bad people’. Will looks like a contender for a Shirley Valentine style romance, if a little too young. Another potential love interest but on the other side of the age gap is Lyle (Ed Harris), an American who dreamily recalls writing songs with Leonard Cohen and also warns Leda away from the family, who he works for. 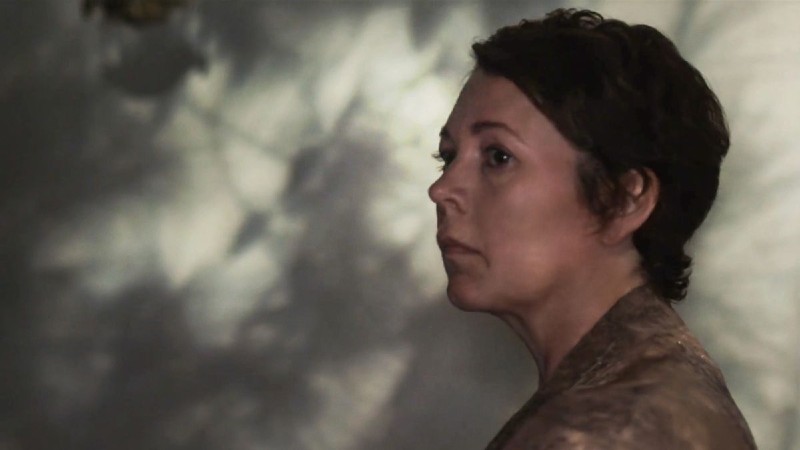 But despite her name – most famous as a classical rape victim – Leda is a survivor. She has a resilience and defiance to her, even as she deals with the decisions she has made in her life. We see her ambitions and we see the sacrifices she makes as she begins to realise that work, family and her own happiness might be incompatible. What is striking about the film is how it deconstructs the very idea of motherhood and the cultural weight we attach to it. There are lines that seem unsayable, unthinkable, but are undoubtedly honest and true. There will be a lot of people in the audience both gasping and nodding their heads, perhaps relieved at seeing their own sentiments portrayed on screen perhaps for the first time.

The whole cast are superb – Peter Sarsgaard has a wonderful moment as a lecturer who tempts Leda at a conference. But it is the pairing of Buckley and Colman that is truly astounding. Olivia Colman can do things with an expression, can suggest such complexity of character, emotion and thought that now Daniel Day-Lewis has retired make her the greatest living British actor. Hell, even if he hasn’t retired, it would still be true. She can suggest depths of pain in a broken smile and utter joy in a laugh. But while we’re at it let’s not detract from Maggie Gyllenhaal’s debut. This is the arrival of an assured confident bold American writer-director, an auteur in fact. She has created a psychological drama of nuance, complexity and depth, which will have you thinking long after the lights go up.

The Lost Daughter premiered at the 78th Venice International Film Festival, when this piece was originally written. Out in the UK in October at the BFI London Film Festival. On Netflix on Monday, January 10th.