Locarno 2021 preview: a return to the magic of in-person discovery

After a year break, the return of an in-person Locarno has this critic feeling both excited and a tad trepidatious. Read our preview now!

Festivals are constantly evolving, having to adapt to new forms of cinematic languages and formats. I’ve covered London, SXSW, Berlinale and several short film festivals from the comfort of my own bedroom, all the while craving the intimacy and distraction-free nature of a proper event. While digital festivals are great for expanding accessibility, they miss the same sense of immersion and discovery, creating moments that stick with you due to the context within which they’re seen.

Newly-appointed artistic director Giona Nazzaro, previously General Delegate of Venice’s International Film Critics’ Week, has a huge challenge ahead to defend Locarno’s claim as one of the most fascinating international arthouse film festivals in the world.

It’s great to see that Locarno is screening over 200 films in cinemas perched on the gorgeous Lago Maggiore. Nazarro agrees, but to a more orthodox degree, telling DMovies that: “If a festival takes place online, it’s not a festival… a festival is an expression of the community.”

And what a great community Locarno is — look past the extortionate prices and you see a cosy bustling town filled with cute cafés, homely grottoes and stunning vistas, all without the queuing stress typically found in a festival of this magnitude. It’s tempting to call it my first “post-pandemic festival,” yet this wouldn’t be entirely accurate. I’ll expect more vigilance, less handshakes, and a constant checking of vaccination documents. It’s an unnerving world right now, with international cinema caught between commerciality and artistic integrity, accessibility and glamour, safety and community.

Nonetheless, the flashy headlines of Cannes or the Oscar-bait of Venice or Toronto, Locarno still appeals to the more discerning cinephile. The Concorso internazionale is the main event, featuring the much hyped gay drama Cop Secret from Iceland, legendary Serbian director Srđan Dragojević (best known for The Wounds) with Nebesa, the return of Russian director Alexander Zeldovich after 10 years since Mishen with tragedy Medea, and Zeros and Ones, the new film from auteur Abel Ferrara starring Ethan Hawke that concerns, because of course it does: “A war between history and the future.”

For those really interested in cinema that breaks down conventions, Concorso presente is one of the most vital film programmes in European cinema. I was particularly impressed last time by those visions which expertly blended the line between documentary and fiction. While I can’t claim to know the names of any of the directors featured this year, this programme promises to provide new films that redefine the capabilities of what cinema can achieve, given past entries such as Space Dogs (Elsa Kremser and Levin Peter, 2019) and Ivana the Terrible (Ivana Mladenovic, 2019). 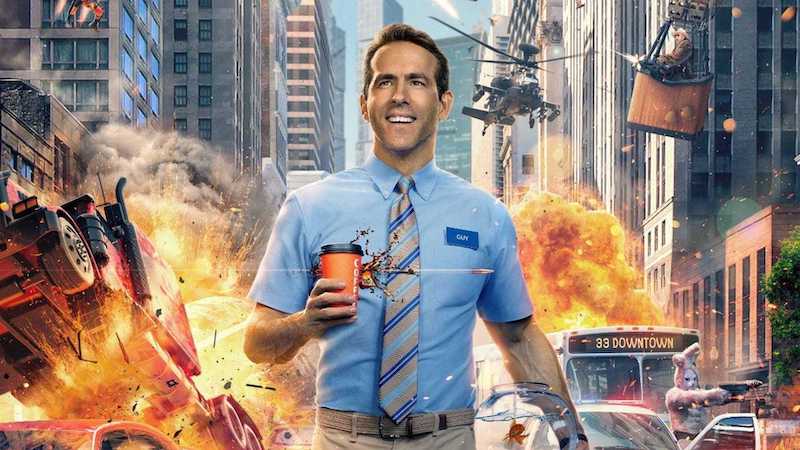 Nazarro has also talked about expanding the popular aspects of the festival, with this year offering crowdpleasers in the form of the Ryan Reynolds-starring (and smirking) Free Guy (Shawn Levy, pictured above),everyone’s favourite shlock-auteur Gaspar Noé with Vortex and even reruns of National Lampoon’s Animal House (John Lanfis, 1978) and The Terminator (James Cameron, 1985) to provide those popcorn pleasures on the Piazza Grande screen (pictured at the top). Those looking for under-appreciated directors from ages past will enjoy the retrospective of the late Alberto Lattuada, a genre-hopping auteur described as a master of Italian cinema. Meanwhile, the three-year focus on Asian cinema continues with the Open Doors features and shorts, spanning films from Vietnam, Thailand, Cambodia and Indonesia.

I am very excited, but due to a combination of lockdown, the Euros and an adorable new dog, I haven’t actually been to a cinema since February, making me a little trepidatious about jumping right in. In an attempt to reacquaint myself with the physicality and tactile nature of the cinema screen, I’m avoiding the soul-and-mind-destroying direct flight to Milan in favour of a slow train and bus journey via Baden-Württemberg, Austria, Liechtenstein and Zurich; my Berlin-accented Hochdeutsch becoming more useless with every further destination until switching to my non-existent Italian at the festival proper. I have absolutely no doubt that both trip and final destination will serve up a buffet of different cultures and ideas, with the new leadership more than capable of reaffirming the magic of in-person discovery. Forza cinema!

Dmovies will be at Locarno Film Festival from 9-13th of August. Check our page regularly for live reviews from the event.

Neither dramatic enough nor powerful enough to hold the viewer's interest, Swiss film wallows in vagueness when it should be ramping up the tension - live from Locarno [Read More...]

Giona Nazzaro, the new artistic director of the Locarno Film Festival, is teeming with optimism, enthusiasm and new ideas for the prestigious event, which could be the first of its type to return to physical format this year - in exclusive interview [Read More...]