Our dirty questions to Edgar Wright

Edgar Wright’s first documentary, The Sparks Bothers investigates the idiosyncratic band founded by Ron and Russell Mael. They’ve been going for more than 50 years now, resulting in 25 studio albums. The band’s famous albums include Kimono My House, Angst in My Pants and No. 1 in Heaven produced by Giorgio Moroder. They have continued to make consistently good records, including the most recent, A Steady Drip, Drip, Drip.

Wright, director of fiction movies such Shaun of the Dead (2004), Scott Pilgrim Vs. the World ( )and Baby Driver (2017), is a long-time fan of Sparks. After becoming friendly with the Mael brothers, he decided to make a feature-length documentary about them simply because it hadn’t yet been done. Ian Schultz talks to Wright about everything from the state of UK cinema exhibition to Dan Waters’ text messages, apocalyptic thriller Miracle Mile (Steve De Jarnatt, 1991) and, of course, Sparks.

Edgar Wright – I got an amazing text from Dan Waters when he saw The Sparks Brothers, and he said “I love the documentary, a masterpiece! EXCEPT for the very unfair dismissal of Rollercoaster (James Goldstone, 1977).”

IS – That sounds very much like Dan… why did you choose Sparks as the topic of your first documentary?

EW – Well, the answer to that is, I didn’t plan to do a documentary at all. It wasn’t on my checklist at all of things to do: “must do documentary.” However, I love music documentaries, and I love music. I think it was because being a fan for a long time, a couple of years ago in Los Angeles I got to meet Sparks, which was a big deal for me having known who they were since I was five. Getting to know them personally started some gears in my head whirring. It was a couple of years after that, in 2017, I had started to say aloud to people “Why hasn’t somebody done a documentary about Sparks? Sparks are like the greatest. most influential band that doesn’t have a documentary! I’ve seen so many music documentaries about bands that are so less influential than Sparks.”

IS – One of the things I liked most in the film was that you don’t leave any topic untouched. When did you decide to make the documentary such an extensive look at Sparks?

EW – I thought that was an important thing: if you’re a fan of a band, you are always trying to turn people on to them. I frequently heard from people who, even if they knew who they were, said they were daunted by the Sparks discography. There was that element, so I wanted to tell the whole story. I know Ron and Russell, that was one of reasons they had turned down previous offers to do a documentary. I think other people wanted to ossify them as a band from the ’70s, like they are “a glam band” or “a band big in the ’70s.” In my mind, what Sparks has been putting out in the last 20 years was good as anything they had done in the ’70s.

They were still a growing concern, so with that in mind, it’s interesting to tell a story that spans more than 50 years rather than just concentrating on the Island years or the Giorgio Moroder years—it was great to tell the whole story. The final thing about that is that I think with Sparks, the misses are as interesting, if not more interesting sometimes, than the hits. The albums that don’t do well are character-building, or they are albums that may have done nothing in their time have gone on to be very influential. So that was important. I felt it would be disingenuous to skip over, like, six years—let’s tell the whole story. 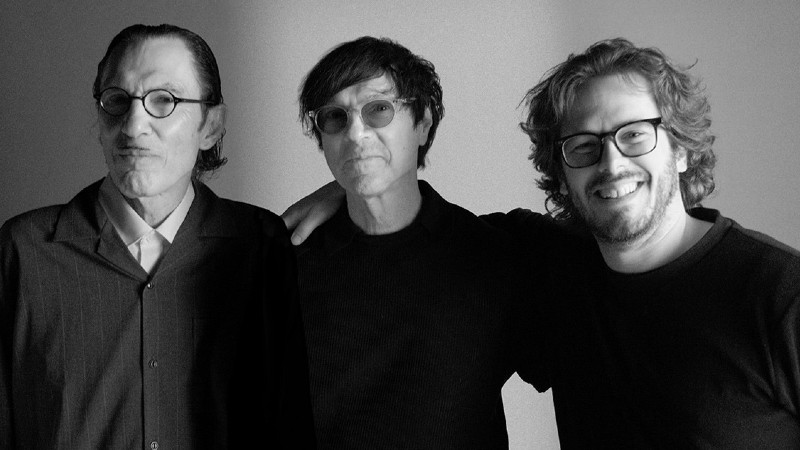 IS – What was the most surprising footage that you located in the process of making the film?

EW – Stuff I had never seen before would be like Ron and Russell as “high-school jocks”: Russell as a quarterback in high school and Ron playing baseball. Them being kind of sports guys was kind of amazing to me, seeing those photographs. I also had never seen Russell’s student film that he made at UCLA in 1970, which was a French New Wave spoof called Très Serious. Not only was it amazing to see the short film, but what was shocking to me is that I had made almost the identical film when I was 18 years old, a French New Wave spoof when I was at art college. I sent mine to Russell and said “Look, we made the same film 23 years apart!” Mine was called Brainless À bout de Lemon Souffle, but apart from that, they were very, very close.

IS – Did you find some stuff from the Tim Burton film that never happened?

EW – There is no footage from that film because they didn’t shoot anything, but we talk about it. I asked them about it, and all the music they did for that film still exists, and they never used it for anything else. From what I understand—actually, this isn’t in the documentary maybe because it’s too complicated to get into – but Tim Burton returned to the idea of doing it, maybe about 15 years ago or less. Tim Burton got back in touch with Sparks: “Hey I’ve been thinking about Mai, the Psychic Girl again and wanted to listen to it again.” So he was kind of interested in coming back to it. Who knows, maybe with the documentary coming out he will return to it for a third time, and make it this time.

IS – What is your favourite Sparks record this week?

EW – This week! Oh my god! There were albums that until I made the documentary I wasn’t as au fait with as some of the others. I guess maybe because they were ones that in the UK were not as big a deal. I think through the process of making the documentary, Angst in My Pants from 1982 became one of my favourite Sparks albums. It hadn’t been previously. It’s a huge album in the States, particularly on the West Coast. It’s a big deal for a lot of Angelenos, they will point to Angst in My Pants as being THE Sparks album, but it wasn’t a big deal in the UK. I knew some of the songs from it but listening to the whole thing more closely—wow, this is one of the best Sparks albums for sure.

IS – Was there anybody you wanted to interview but were unable to?

EW – Yeah, I mean, there are kind of big people who come into their orbit. That’s just a matter of, even if they made positive noises about being in it, actually trying to schedule that is difficult. Obviously, we did an amazing job getting the 80 people who are in the documentary. So there are obviously people like Paul McCartney, Elton John, Brian May or even Tim Burton that you would love to have in it, but it doesn’t quite work out. But that’s fine, it is what it is, and I’m very happy with the people who are in the documentary. 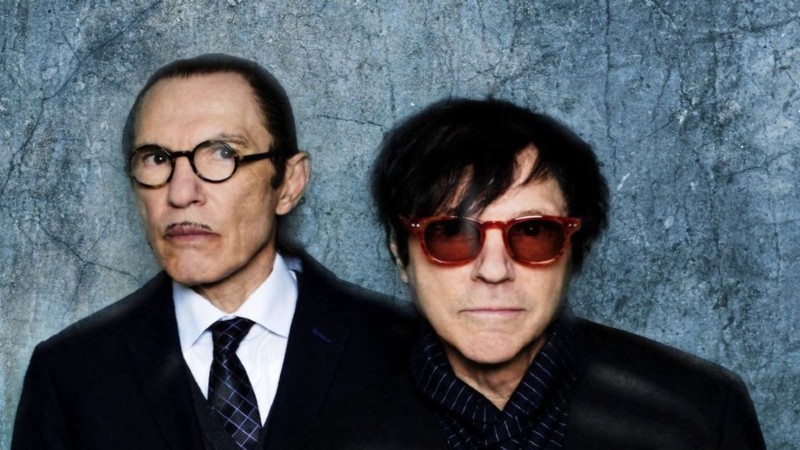 IS – I’m very happy you didn’t include Morrissey in the documentary. Did you ever reach out to him?

EW – I did, and he didn’t say no, but he absolutely didn’t say yes. But it’s not like I didn’t reach out to him [laughs].

IS – What did you think of Miracle Mile? I noticed that in one of your piles, and I think it’s one you said you hadn’t seen before?

EW – Yeah, it’s one of those that movies that people assume, especially when Shaun of The Dead came out, a number of journalists said “you must be a big Miracle Mile fan.” And I was like, “actually, I’ve never seen it.” And remember, sometimes it would be that thing when you’re growing up… people have to remember that in a pre-Internet age, if something’s not playing at your local cinema and it isn’t also at your local video store, which it wasn’t, that it might escape your attention for decades. I was always aware of that movie, but it had never come within my reach until I think it was re-released on Blu-Ray. I saw it and I was like “Oh, I’m going to get that because I’ve not seen it,” and I did really enjoy it. It was very interesting to see that area on film, because when I live in Los Angeles I drive by that Johnie’s all the time.

IS – Great movie, and I’m still waiting for the sequel! Do you have any concerns about cinematic presentation in the UK specifically, because they seem really reluctant to release lots of things recently?

EQ – Yeah, I don’t quite know what is going on with that. I read that about The Green Knight (David Lowery, 2021) the other day. I’m not quite sure what’s happening there. Strangely enough, I’ve seen that movie, and I was lucky enough to see it at the cinema in London. Now I feel particularly privileged, because it doesn’t seem it’s coming out anytime soon. Hardcore cinema fans are going back, and I think that with the nervousness about the pandemic what has gone away is more casual cinemagoers.

IS – What can you say about your upcoming movie Last Night in Soho at the moment?

EW – I’m excited for you to see it! I haven’t switched gears into promoting that one yet. Literally, once The Spark Brothers is out on Friday, my brain is going to have like a hard reset to start promoting that one. It isn’t that I can’t talk about it, but I haven’t quite figured out how to talk about in the same interview as Sparks. I’m very excited for people to see it!

IS – One final question, somewhat related: are you happy that they moved its release from the same day as the new Wes Anderson film The French Dispatch?

EW – I don’t think the two films have any overlap, it was a more of a pile-up of Dune still moving on, too. I would think that it’s more of a problem for Wes Anderson that there are two Timothée Chalamet movies coming out the same day [laughs], because that’s a bit strange! I never quite understand those things in terms of release dates, because as a cinema fan, I want to see The French Dispatch and Dune as well! It doesn’t matter to me, as long as people see the movie—that’s the important thing. The whole idea of box-office numbers being a horse race is a detriment to cinema, and weirdly it has not become any less important post-pandemic. The important thing is to get people to go to the cinema, full stop.

Edgar Wright is pictured at the top; in the second image he is pictured with the Spark Brothers; the Spark brothers are pictured on their own in the third picture – all three images are stills from the documentary

"The Best British band to come out of the US" have an impressive career spanning five decades, and this rockumentary gives the eccentric duo just the right treatment - in cinemas on Friday, July 30th [Read More...]