We are looking out for the dirty gems from the eclectic programme at Locarno so you don't have to. They include the latest films by Tarantino, Kapadia, Kurosawa and many more!

The last major film festival of the summer season before Oscar hype ramps up in the autumn, Locarno’s reputation is built upon its eclectic and unconventional programme. Its standout cinema is the Piazza Grande — with over 8,000 available seats, it’s the largest outdoor screen in the world (pictured below) — which crucially means that queueing is a lot less stressful than during Venice or Cannes. This year’s Festival, curated for the first time by Lili Hinstin since Carlo Chatrian moved to the Berlinale, might be low on the big names, but nonetheless offers an exciting, experimental and challenging line-up. From the Moving Ahead section, focusing on cinema’s most obscure edges to the retrospective Shades of Black — celebrating black cinema in all its forms — this year’s Festival champions that which is daring, different and auteur-driven. The event takes place from August 7th to the 17th. 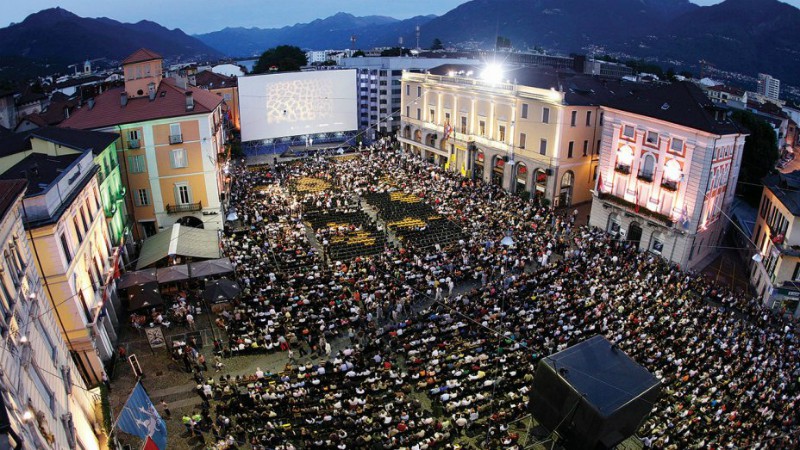 Here are the 10 films we are most excited for!

Joseph Gordon-Levitt has a great knack for taking traditional genre fare and turning it into something that seems vital. He stars in 7500 as a young pilot tasked with negotiating with plane hijackers. Given that this premise is one of the most overcrowded of micro-genres, it will be interesting to see if 7500 — referring to the code pilots use in the event of a hijacking — can rise above its predecessors into something truly worthwhile. The claustrophobic clips released so far suggest a rather minimalist and claustrophobic approach, requiring Gordon-Levitt to really step up and carry the film all by himself.

2. Once Upon A Time… In Hollywood (Quentin Tarantino):

Easily the most anticipated film at the festival, Tarantino’s ninth film sees the postmodern auteur return to the LA locale of his first three films. Received to rapturous applause at Cannes, this Leonardo DiCaprio and Brad Pitt-starring lament for a passing age of Hollywood, set against the backdrop of the Manson Murders, has been touted by some as a return to form following the middling The Hateful Eight (2015). Known for provoking endless discussion, it will be fascinating to see how he tackles the horrendous Manson murders and makes it entertaining and meaningful.

Yes, its Will from The Inbetweeners (2008-2010) with his debut film playing in competition at a major international film festival! Days of the Bagnold Summer, adapted from the graphic novel by Joff Winterhart, looks like a classic coming-of-age tale, telling the story of a young heavy-metal loving teen who is forced to spend his holiday’s with his annoying mother. Featuring an airy Belle and Sebastian soundtrack, and performances from Tamsin Greig, Rob Brydon and Earl Cave, it seems to be another thoughtful addition to the British oddball teen canon.

Laika was the first living creature to ever be sent into space by the Soviet Union, dying in the name of scientific progress. Legends say that the dog returned to earth and lives among the streets of Moscow as a ghost. Experimental documentary Space Dogs looks to be an unconventional look at animal-human relations, and how progress can easily come at a cost to the earth’s most friendly animals. Interestingly enough, this film comes with a content warning while the inevitably violent Once Upon A Time In Hollywood doesn’t. Dog lovers beware!

Asif Kapadia has established himself as one of the best profilers in the documentary business with character portraits of legends such as Amy Whinehouse (Amy, 2015) and Brazilian F1 Driver Artyon Senna (Senna, 2010). For his latest work, he turns to arguably the greatest footballer of all time, Diego Maradona, utilising an extraordinary 500 hours of unused footage to go deep on his mythical stature. With critics saying that deep knowledge of football is not required to enjoy the movie, it seems that Kapadia has found a way to use Maradona’s tale to enquire into deeper truths regarding the human condition.

The preeminent Quebecois auteur Denis Côté’s previous film, Ghost Town Anthology (2019) may have already been released this year after positive buzz at Berlinale, but he’s already back at it again with the experimental film Wilcox. Running only 63 minutes long and featuring no dialogue, it seems Côté is taking his minimalist instincts to a new level; telling the quiet story of a hermit living beyond the normal bounds of society, surviving on his wits alone in the vast countryside.

Wilcox is also pictured at the top of this article.

The most exciting contemporary director to come out of Iceland, Rúnar Rúnarsson tells sensitive, family-focused tales set against the beautiful backdrop of the rugged and barren countryside. Often filmed in grainy 16mm, his body of work does a lot with little dialogue yet strong and evocative gestures. His latest is set during Christmas time, and features only 56 scenes; foregoing a traditional narrative to create an entire portrait of Icelandic society. Judging from his boldly shot trailer, this could perhaps be his best film yet.

Already released to highly positive reception in the USA, The Last Black Man in San Francisco makes its debut on European shores. At tale of gentrification that leaves the African-American community of San Francisco behind, it has been touted as a highly lyrical and dreamlike depiction of a city that has changed beyond measure. It stars Jimmie Falls playing a version of himself, attempting to reclaim his childhood home built by his grandfather. Picked up by A24, currently the hottest independent film studio in the USA, it’ll be interesting to see how it plays over the pond.

The Berlin school — comprised of directors such as Christian Petzold and Angela Schanelec — have been making serious waves on the arthouse scene recently, from Berlinale to beyond. Ulrich Köhler may not specifically be from Berlin, but his work — bold, uncompromising and completely its own — fits the ticket exactly. His last film, In My Room (2018) took a wistful look at the end of the world, while the upcoming A Voluntary Year tells the story of a girl taking a gap year volunteering abroad, possibility separating her from her father. It’ll be fascinating to see what Köhler does with the topic here.

An Uzbekistan-Japan co-production, To The End of The Earth is a clash of civilisations story; depicting a young Japanese woman’s travels to the central Asian country to film the latest episode of her travel show. Here she has the bizarre aim of capturing a legendary fish; once again showing Kurosawa’s love of blending genres together, mixing together comedy, thriller and romance for good effect. The closing film of the festival, it’ll be the second Kurosawa film to premiere at Locarno after Real (2013).

DMovies critic Redmond Bacon will be at the festival. Follow DMovies for our exclusive coverage of the event!

Under the red carpet of Cannes

Beyond pomp and circumstance: Dirty Movies lifts the red carpet in Cannes and uncovers the most audacious and promising projects being hatched at the event [Read More...]