"Mostly clean movie"
Neither dramatic enough nor powerful enough to hold the viewer's interest, Swiss film wallows in vagueness when it should be ramping up the tension - live from Locarno

A doctor (Ramzy Bedia) in an unnamed French-speaking Mediterranean country finds himself caught in the grip of endless violence in Terminal South, a meandering drama about trying to maintain dignity in a world gone wrong. Despite boasting solid performances, handsome cinematography and moments of sheer viciousness, Rabah Ameur-Zaïmeche’s sixth film has little to say and even less to say it with.

The opening sequence quickly shows what kind of country we’re in; a bus trip through the mountains raided by men in army uniforms who take everyone’s most precious belongings. Moments of bloodshed spark out of nowhere, any encounter containing the ability to erupt into a skirmish. When the bus driver reports the theft to a local newspaper, he cannot identify the men, unsure if they’re actually the army or simply bandits dressed up in their uniform. The chief editor agrees that it’s important, and promises to publish the story the next day. But when he goes to the office the next morning, a car pulls up and he is shot dead.

The shocking death of the doctor’s is treated as a watershed moment here, the traditional Islamic funeral given ten plus minutes to really soak in his tragic fate. Yet this is a guy we have only met a couple of times; making it difficult to really care that he’s gone. Making scenes like this longer than they need to be often achieves the opposite effect of what a filmmaker intended; causing me to lose interest just when my emotional investment should be growing. 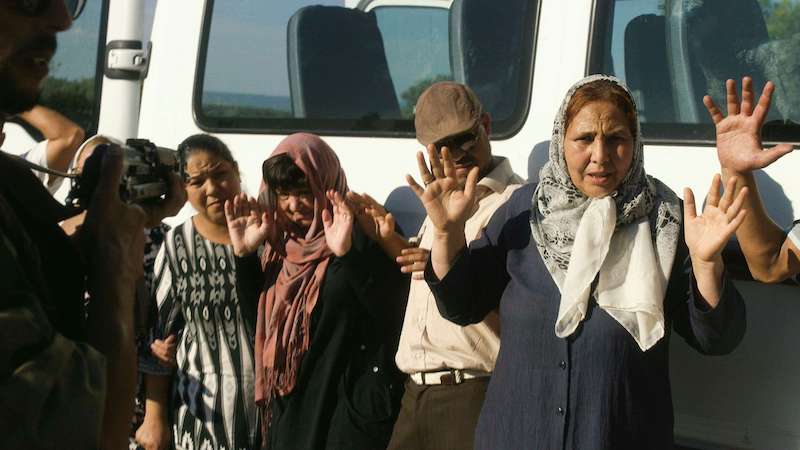 Meanwhile, the doctor’s fate is a miserable one, caught up in a Kafkesque world where the line between police, terrorists and militia men has collapsed. There are no real good guys here, no epic signs of resistance, just ordinary men and women trying to do their best. Even he is sent death threats and told to stop his work, treating patients whose ailments have been exacerbated by living in such a society. But the doctor’s story randomly piles on the misery, giving Bedia little to work with dramatically. The predominately comic actor pulls in a decent shift here, yet he cannot overcome a fundamentally weak screenplay without any true central conflict to speak of.

There is a difference between being ambiguous and being vague. While ambiguity invites the viewer to search for different meanings, vagueness can often leave us scratching our heads. We never even find out where the film is set. Are we in the south of France or are we in North Africa? I assume this is the point, to display how any country has the capacity to steadily disintegrate. Yet without any real context, I found it hard to find a foothold in the story, its tale completely washing over me like the Mediterranean Sea.

A French Release date has been set for 13 November. Whether the film is released anywhere else remains to be seen.

Five years in the making, Adolescentes is a remarkable achievement, charting two very different girls from 13 to 18 as they grow into maturity - on Mubi on July 9th [Read More...]

This surprisingly sentimental entry from Rúnar Rúnnarsson is an epic ode to his Icelandic homeland in equal parts funny and sad - now on Mubi [Read More...]