My Heart Can’t Beat Unless You Tell it To

"Dirty gem"
Impressive debut horror feature uses the vampire as a metaphor for "cannibalistic" capitalism -  from the Tribeca Film Festival.

Ironically for a creature with no pulse, the vampire has been a pulsating presence throughout horror cinema, dating back to silent German Expressionism, in F.W. Murnau’s Nosferatu (1922). Now, the well established tropes, borne out of Bram Stokers celebrated 1897 novel, draws a youthful voice in American cinema.

Director Jonathan Cuartas understands that in the same way that the werewolf reflects man’s dual nature, the vampire is not only an object of fear, but it speaks to personal, cultural and political ideas and themes. His simple and self-contained story centres around a brother and sister, Dwight (Patrick Fugit) and Jessie (Ingrid Sophie Schram), who look after their younger sibling Thomas (Owen Campbell), who suffers from vampiric afflictions. The story and the actions of the characters are a response to economic and social hardships. Shot in Salt Lake City, Utah, it’s an unflattering vision of America that gives the film its bite – excuse the pun!

Longing for a different life, Dwight finds a human connection with a call girl. It’s a momentary solace of not only physical intimacy, but conversation with someone removed from his dilemma. He even asks her to go away with him, but his time is up. Unlike him, she’s not the one looking to runaway. As his resolve to prey upon and murder vulnerable victims wavers, he finds himself in conflict with Jessie, who remains determined to preserve their family unit.

Each character adds an important layer to the story – Thomas is the naïve child, Jessie represents the horror of self-preservation, and Dwight is the conscience, opening up the moral conversation. The simple story does not yield a single thematic heart. Cuartas has crafted a film rooted in the horror of self-preservation and survival. We find ourselves asking how far someone can compromise their social and human morals for the sake of familial love? The blood that bonds the siblings, and the blood they spill to keep Thomas alive, is full of visceral symbolism, weaving together family and the tribal mentality.

Dwight and Jessie’s role as carers immediately draws narrative comparisons to Tomas Alfredson’s Let The Right One In (Låt den rätte komma in, 2008), the last “great” vampire film. I can’t be so bold as to say the American indie, My Heart Can’t Beat Unless You Tell it To, is its successor, but it’s title does have a captivating and poetic ring to it. The similarities the two share, are offset by a feeling that they belong to different worlds. It’s is a credit to Cuartas to have found his own voice, echoing and not imitating Alfredson’s near perfect film. 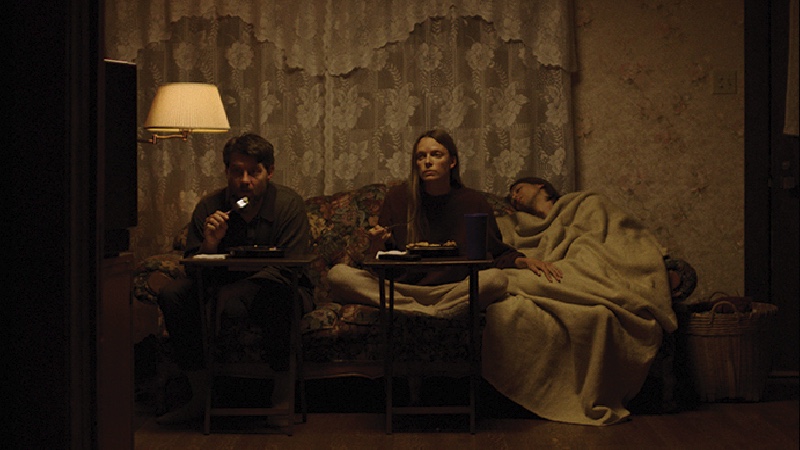 A second driving theme is loneliness, and how we can feel lonely even when we’re not alone. Thomas hears teenagers playing outside and wants to join them, but he’s not allowed out of the house. Dwight and Jessie are pulling apart from one another, and for all of her strength, holding the family together feels a fleeting effort. If not for the moral burden that Dwight’s beginning to succumb to, then with every kill, the risk of exposure grows. The victims themselves are on the fringes of society, the homeless, the immigrant and the sex worker. They do not express a feeling of loneliness, but the common perception, or identification of these people as being outsiders, subtly frames loneliness as an external identity bestowed upon them, as much as it can be an internal sense of feeling.

In Cuartas’ story, the vampire is presented as weak, dependent on his older siblings. The only way we can liken him is to a house cat, a domesticated vampire with no skills of hunting and self-preservation. Without Dwight and Jessie, Thomas would be suffocated by economic and social poverty, reduced to a life of squalor, and in all likelihood a quick death.

Grounded in the bleak reality of economic and social hardship, there are a few doors to walk through when responding to the film. Thomas is treated as a victim of an illness, when he’s just different, and his vulnerability also stems from economic and social needs. It’s a conversation about the way we perceive difference or the “other” as something untoward, but more significant is the ever-expanding wealth gap, supported by the capitalist engine, increasing the number of vulnerable people. If we are to condemn Dwight and Jessie, we must also condemn capitalism. Thomas feeding off the blood of the vulnerable is a metaphor of the rich and the political élite feeding off the poor, that asks the question, in the shadow of the monstrous vampire, are we any less cannibalistic?

There’s no tidy moral conclusion to be found in My Heart Can’t Beat Unless You Tell it To. It does not prioritise sympathetic or empathetic protagonists, rather it’s a beautifully bleak and tragic story about sibling relationships, and difficult choices.

My Heart Can’t Beat Unless You Tell it To has just premiered at the Tribeca Film Festival.

The sombre and twisted comedy-crime classic has now just received a 25-anniversary commemorative reissue, and it feels as pristine as fresh blood on white snow - in selected cinemas and also on VoD [Read More...]