"Dirty gem"
A journalist and a theatre director join forces in order to rebuild a Sierra Leone's fractured identity and neglected culture - in cinemas on Friday, June 25th

The capital of Sierra Leone was once described as the “Athens of Africa”. It was home to the first university ever in Sub-Saharan Africa, and it took pride in being safe haven for freed slaves. The country is bursting with natural riches: gold, diamond and a lush vegetation. And theatre was thriving until as recently as the 1970s. Then civil war, corruption and ebola savaged the country.

British filmmaker Clive Patterson and Sierra Leonean theatre director Clive Patterson wish to reclaim the country’s “glorious past” and raise awareness of the social, political and sanitary issues, thereby answering the lingering question: “where did it all go wrong?”. Their quest is neither simple nor straightforward. The play’s journey is as bumpy and turbulent as the country’s history.

National identity is complex and ambiguous, torn between the Western and Eastern civilisation. English is the country’s de facto language. The European colonisers transformed their gods into devils. Sierra Leoneans have a profound antipathy towards all things white. Even positive traits such as punctuality are often dismissed as a “white man’s thing”, making Patterson’s mission far more difficult: how can you rehearse a play if actors fail to abide to any notion of time? 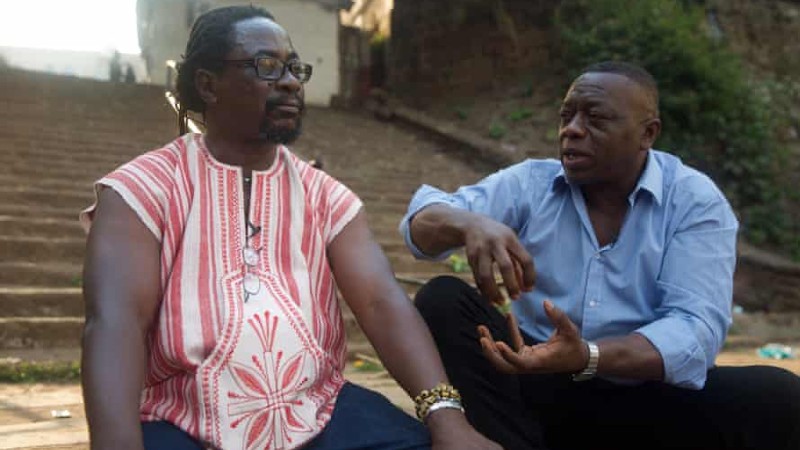 This sobering documentary is also a very conventional one, vaguely reminiscent of old-fashioned ethnographic documentary practices of John Grierson and Robert Flaherty. Most interactions are highly conversational, and the music score is festive and upbeat. The filmmaker Clive Patterson is white and – perhaps unsurprisingly – never appears in front of the camera. This won’t prevent viewers from noting that the director’s gaze is a little distant and foreign, if well-intentioned.

The most intense moments include a meeting with the country’s president Koroma, Charlie opening up about the loss of his lifelong partner Fatie years earlier and a very authoritarian and dysfunctional health minister making threats to Charles and his troupe, a in sordid reminder that corruption and coercion are still rife in this small Western African nation.

Patterson, however, deserves credit for painting a positive and colourful picture of a troubled nation. Most Western journalists/documentarists opt instead for war stories instead, something which is noted in the movie itself. Stories of hope are few and far between, perhaps because of the perception that they don’t sell as much. Viewers are triggered by pain and indignation. Patterson begs to differ, and instead opts to bang the drums and beat the blues with a tale of artistic resilience.

Sing, Freetown is out at Picturehouse Central from Friday, June 25th.