Beautifully produced, and directed with stellar invention, this probing Finnish drama is surprisingly comic in its outlook. The film follows a widowed cardiac surgeon Juha (Pekka Strang), aching to find redemption a decade after his wife’s untimely death. Then he meets Mona (Krista Kosonen), a precocious sex worker who brings to his knees. “Dogs don’t wear pants,” she tells him, and Juha spends the night in various carnal positions. He faints, falling for the whip, where he’s transported back into the arms of his loving wife.

Kosonen is best known for Blade Runner 2049 (Denis Villeneuve, 2017), and the film throws a series of loving homage to the sci-fi masterwork. We find Mona, caught in the throes of dance, shifting to a palette of blue, red and white textures. The club feels eerily similar to the haunts Rick Deckard searched for fresh blood, and Mona-laced from head to toe in latex- looks like she’s just walked off a sci set into a Finland that’s even more desolate, dark and dystopian.

Outside stands Juha, denied entry to the club he is eager to venture, on account of his stature, sex and age. Troubled souls the pair of them, Juha and Mona embrace the animal positions as their means of self-discovery, in a world of anonymous drifters. And then there’s Micke Nyström’s sound design, positioned as a third character, cautioning viewers to the density of the urges by shifting the score to the beats of the characters. 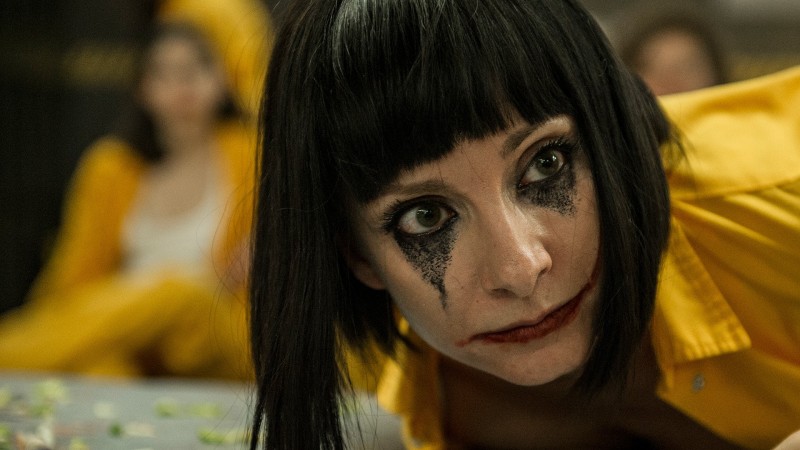 Dogs Don’t Wear Pants isn’t, despite its title, a silly film, and the drama finds time to pay focus to the lead’s emotional arc. Juha has spent most of his life appeasing his clients, posing as a smartly dressed, if somewhat stuffy, medical practitioner, only to throw himself into the deep end of sexual depravity. His workmates have noticed a transition, querying the neck braces their boss wears to work. More importantly, his daughter is trying to reconcile her new father from the man who spent much of the years in a vegetative state.