The third feature film by Canadian director Mark Raso concerns the widespread affliction of sudden insomnia across, what we assume is the entire globe. A strange event occurs in which all electrical power is suddenly cut and all humans – and indeed animals – suddenly cannot sleep. Widespread panic quickly ensues as people realise that their days are numbered and their slow descent into sleep-deprived insanity is just on the horizon. Among this chaos, a family tries to traverse the landscape and find some kind of sanctuary away from the crumbling urban decay.

Awake follows Jill (Gina Rodriguez), a security guard and former soldier, her teenage son Noah (Lucius Hoyos), and her young daughter Matilda (Ariana Greenblatt). As a side hustle to her security job in a pharmaceutical lab, Jill also raids the expired drug bins and sells them on to a local dealer named Gregg (Dan Beirne). It is eluded to that Jill has a criminal past as both her children are currently under the care of their grandmother Doris (Frances Fisher). Jill and the kids are driving to school when the ‘event’ hits and an out of control car knock the family off the road and into a lake. They are rescued by two police officers who resuscitate Matilda. The officers inform Jill that Matilda was not breathing for about a minute and that they should head to the nearest hospital for check-ups.

When they arrive at the busy hospital they discover that coma patients have suddenly awoken. Knowing they are unlikely to receive any help they walk back to Doris’s house and try to figure out what is going on. After a night of no sleep, Jill heads back to her security job. She kisses a sleeping Matilda before she leaves. On her way to work, Jill rides through groups of people who have been partying all night and others who are bewildered and dazed by their current circumstances.

She then bumps into Gregg who tells her he will pay double if she can get him another supply of expired drugs for all the party goers. Her workplace is deserted, but when she attempts to steal the drugs she is suddenly surrounded by army officers and the facility’s chief psychiatrist Dr. Murphy (Jennifer Jason Leigh), who informs Jill that she is being drafted to set up a research hub to try and understand what is happening to people and to find a cure. Dr. Murphy’s associate Brian (Finn Jones) tells Jill they have a patient with the ability to sleep, who they are moving to the hub. Jill realises that Matilda was sleeping when she left and that if this is discovered, she would be subjected to mass hysteria and medical experiments.

Doris has taken Matilda to her local church where a sleep-deprived congregation intends to sacrifice her, believing this is God’s will. Noah and Jill rescue Matilda just in time and steal an old Dodge to try and escape. As they travel, Jill and Noah become more incoherent and unable to function. They encounter groups of people who have lost their minds to sleep deprivation. Noah convinces Jill that they need to locate the hub where Dr. Murphy is performing her research, stating that Matilda will not survive by herself when they eventually die of exhaustion. Jill agrees. As they pass through a small town, they find a library and go inside to locate a map that will guide them towards the hub. They encounter a group of prisoners, who have escaped whilst their guards went insane. One of the group steals the family’s car whilst Matilda is sleeping in the backseat. He returns and pulls up just as the group of inmates are about to attack Jill and Noah. Back in the car, the prisoner introduces himself as Dodge (Shamier Anderson). The effects of the sleep deprivation hasn’t completely twisted Dodge’s mind yet as he tells them he only sleeps two or three hours a night anyway.

As they arrive at the hub, Dodge and the family part ways. Jill goes into the hub alone to case out the joint. She finds soldiers who are on the verge of madness and a group of doctors barely able to hold it together. They inject themselves with a fluid that stimulates their brains and keeps them alert but wrecks their brains. Jill also finds the patient who is still able to sleep. She is an elderly and frail lady. Jill tries to set her free saying that she must raise Matilda for her. Yet it soon becomes clear that the lady is feeble and in the late stages of a fatal condition. Dr. Murphy walks in and finds Jill who claims she is there to offer assistance. Suddenly Dodge returns with Noah and Matilda. 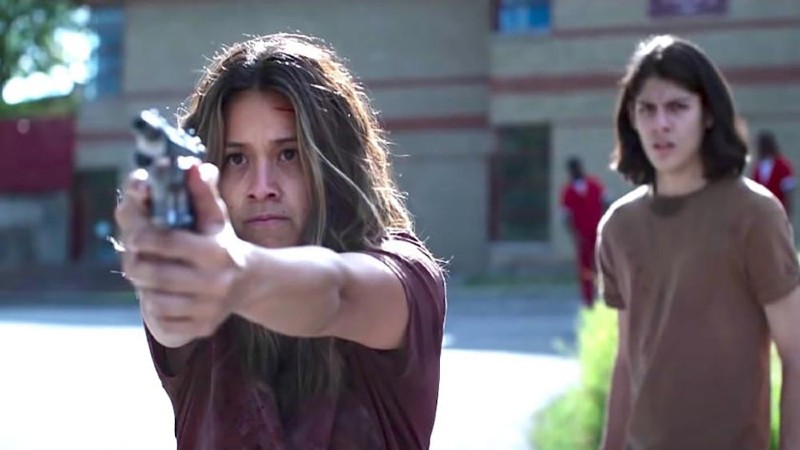 They are surrounded by paranoid soldiers. At gunpoint, Matilda shouts that she can sleep. Matilda goes through some tests assisted by a kindly doctor who is perhaps the sanest of them all even though he is showing clear signs of mental degradation. A soldier outside the main complex mistakes a pine cone on the floor for a hand grenade and begins to fire his gun which in turn sets the other soldiers off. A mass killing ensues, with soldiers executing each other and all the doctors. Jill manages to set herself free and rescues Noah and Matilda. Noah, purposely it seems, touches a live wire and is electrocuted to death. Matilda finds a resuscitator and attempts to bring him back to life. It appears not to work.

As morning comes, Jill is barely functional and lies on Noah’s chest while watching Matilda sleep soundly. Matilda wakes up and sees that Noah’s chest is rising up and down. He is alive. Matilda wakes him and they realise that their short time being dead and then resuscitated back to life has meant that the consequences of the event no longer affect them. They both look to Jill, who is on the verge of death. They take her to a nearby lake and drown her until she is unresponsive. Noah then applies CPR and we hear Jill take in a deep and sharp breath. We assume that she will sleep again.

Awake has similarities Blindness (Fernando Meirelles), based on the eponymous book by Jose Saramago, in which an unexplained phenomenon – in this case a mass event that renders people blind – befalls society and the focus becomes on how pockets of this society adapt to this ‘new normal’. That film explored the moral implications of a group of people who can no longer “see” the horrors they perform. One example is the rape and murder of one of the blinded women by a group of also blinded men. The consequences of blindness is shorter with people regaining their sight a few weeks later, but not after most of society has succumbed to madness and despair. There is a grain of hope that with the return of sight (and insight), humanity will be restored. The film is also told from the perspective of a woman (Julianne Moore) who has retained her sight and can watch as society crumbles and succumbs to its base instincts of survival.

In Awake, the reason behind peoples sudden inability to sleep is never given or explained, though there is mention of a solar flare being responsible, and a scene that shows satellites fall out of orbit and burning up in the night sky as a restless Jill and Noah watch, It does seem reasonable that this is what has occured. A trigger event has set out the slow destruction of humanity. In Awake, we the audience are offered no such hope that society will recover. Though the family unit of Jill, Noah, and Matilda have survived the trauma and can now sleep, what they have to survive up against is anyone’s guess. A society on the brink of collapse that can only be restored through the act of death and resuscitation is not a sellable notion to the tired masses. It might appear that only a handful of people will be left to pick up the pieces.

Awake falls flat with many pacing issues, performances that don’t quite deliver on the absolute dread that humanity faces, and a general lack of substance. A more interesting film exists here somewhere, but the one we are given doesn’t quite gel with expectations. There could be a few things at play that set it back that might not be the film’s fault as such. Firstly, a sense of fatigue from the viewer watching very tired people lose their cool when we as a society are wired up on the continuous machine pumping out neoliberalism and capitalism that makes us work 40 hour weeks and leaves us drained, grouchy, and depressed in the hours we are not at work. Consumerism and celebrity news that we doom scroll on our devices are the things that keep us awake. That, and copious amounts of coffee and prescription drugs to numb the dull background ache that seems to be always there.

Secondly, Awake must be viewed in light of the ongoing Covid-19 pandemic. For a number of reasons we are doing much better than the society seen in the film, we’ve handled the so-called ‘new normal’ with some dignity, though we might still be on the brink of some radical change, be it hopeful or despairing. Nonetheless, in the wake of Covid-19’s devastating crawl across the planet there is no doubt that society has continued to function in some capacity in most places. In Awake, society crumbles within hours and people become deeply dysfunctional and irrational to the point that murder goes unpunished and lawlessness rules. A film that depicts this scenario when we the audience have basically lived it for the past year doesn’t make for believable viewing. We have become partly immune to these types of slow societal disaster movies that currently seem very popular, because we’ve been cast in a real-life version of one ourselves.

Awake is a fairly perfunctory story of staying strong against adversity, but it is one you might struggle to actually stay awake for. It’s incredibly downbeat, and this isn’t a criticism as downbeat movies can offer much needed reflections of current times. What they need to provide and what we need to see is some slight glimmer that a world is waiting out there that is worth fighting for. That there are people and places where life and new experiences of living can be found and can thrive. Film absolutely should provide this. Awake doesn’t deliver on its interesting premise. It would prefer to just sleep.

Awake is out now on Netflix.