Some Kind of Heaven

"Filthy genius movie"
Insider exploration of a gigantic Floridian retirement-complex-cum-city-state reinforces the adage that age is just a number - filthy genius doc is on VoD on Friday, May 14th

Alligators and palm trees, golf course-traipsing retirees; on the surface ‘The Villages’ seems exactly as you’d imagine a Florida retirement community, based on brief snippets caught from American media. Only supersize it to 11, in the mode of the grotesque megachurches and outsized shopping malls in which the US of A revels. Featuring a population of over 130,000 across 32 square miles of fishing lakes, tennis courts, bowling alleys, supermarkets, clubs and restaurants, this is no sedate home for the elderly. It is a margarita-infused, Hawaiian shirt clad fiesta to celebrate life and its impending finale.

With Some Kind of Heaven, debut feature director Lance Oppenheim constructs an insider look at the marvels of this sun-soaked, stranger than fiction community, through the lens of a select few residents. Character-driven pieces of this ilk live and die by their colourful casts and here Oppenheim shows a canny knack for assembling a motley crew upon which to triangulate his narrative.

First to be introduced are Reggie and his wife Anne, uneasily married after some 47 years. Whilst she is jubilantly engaged in The Villages ecosystem of sport and recreation, he is on a different, alienating path of meditation and drug-induced self discovery. The cracks are starting to show in his psyche and their marriage both. Elsewise, grifter Dennis is looking for love or the next best offer. Living out of his van as a self-professed outlaw, he is broke and in search of a wealthy dowager to latch onto for a limpetlike life of leisure. Finally, straight woman Barbara is an ideal proxy for the viewer. Recently widowed, her ennui is bubbling over into dissatisfaction and she is forcing herself to engage with the range of singles clubs, tai chi, amaetur dramatics and dance classes that are available, bringing the camera crew along with her. 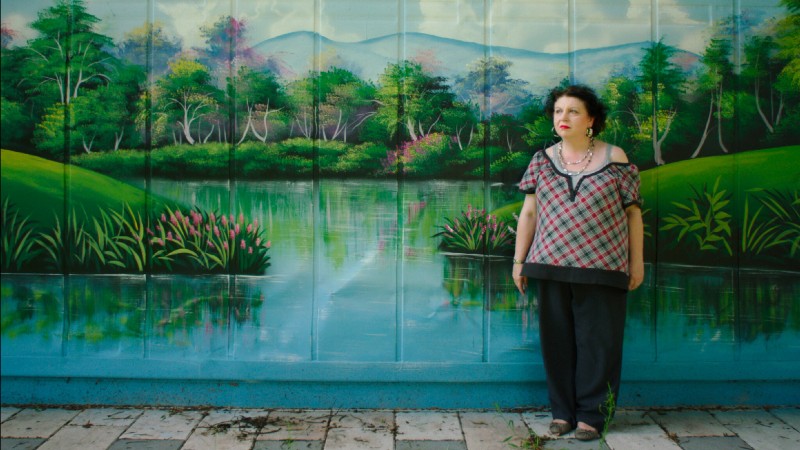 Each tale presents its own spectrum of highs and lows, intensified by the repeated awareness that residents of The Villages are in the final stages of their existence. Indeed, some elements make for tough viewing, be it the quiet moments of self-doubt from Barbara or the beleaguered and confused looks of Anne, when her husband is practically self-harming in a near-psychotic state. However, even at its most extreme, this is a film with heart and consideration for its subjects that never veers into cruel or mocking territory, despite featuring a pastor with a pet dromedary and a fella dressed as Batman who bombs it around town in a customised golf cart.

This warm approach is married by the easy beauty of its presentation, with grainy film suggesting a place unmoored from the worries of the modern world and musical cues that evoke a made-for-tv Hallmark movie from the ’80s. At the same time, striking framing and ethereal landscape shots show thoroughly modern sensibilities and the progression of Some Kind of Heaven also has the loose, improvisational vibe of a Christopher Guest mockumentary. The story behind the making of the film is also curious, with five years of unanswered emails from Oppenheimer to much-garlanded producer Darren Aronofsky of Black Swan (2010) and mother! (2017) fame. That a film of this assured vision comes as a part of an undergraduate thesis project is startling

There are the usual criticisms that could be leveraged, of the film presenting a biased few of The Villages founded upon the most extreme candidates. However, cursory scrolling through the Villages-News.com frontpage recounts such headlines as: a 71-year-old Villager speeding in his red Corvette, a 77-year-old in an”alleged Whopper-throwing racial tirade at the Burger King” and a 65-year-old pointing a gun at his neighbour. These from the last two weeks alone. In the face of such evidence, it’s clear that 70 is the new 20 and the scenes shown on film may actually be a tame reflection of the true debauchery in The Villages. The film would make a perfect double bill with last year’s excellent Boys State (Amanda McBaine, Jesse Moss), which followed politically active teenage boys in a Texan summer camp with a model government theme. Please, Lance Oppenheim, send more dispatches from hyperspecific American demographics. The most esoteric sci fi stories cannot compare.

Some Kind of Heaven is out on Digital on Friday, May 14th.