"Dirty gem"
Two theology students grapple with the authoritarian Czechoslovakian regime and the collaborationist Catholic Church, in this somber and poetic period drama - on Curzon Home Cinema on Friday, May 14th, and also in selected cinemas

It looks like the 19th century, but in reality this drama is set in the 1980s, shortly before the demise of the USSR and the dissolution of Czechoslovakia. Life was so colourless and oppressive that it looks like a distant past. Perhaps unsurprisingly, director Ivan Ostrochovsky opted to shoot the movie entirely in black and white, with his camera virtually static. The outcome is somber and stern, a highly claustrophobic movie almost detached from reality. A cold, monotone and austere affair, yet brewing with political ardour and religious faith.

Such was the reality of devout Catholics living under the Czechoslovakian communist regime. Their Church was allowed to exist as long as it cooperated with the highly corrupt and technically atheist government. An initiative called Pacem in Terris (named after a papal encyclical about relations between states and individuals) sealed this awkward collaboration between state and church

Students Juraj (Samuel Skyva) and Michal (Samuel Polakovič) had to grapple with both tyrannical organisations at once. State and Church – both led by dispassionate and cold grey man – were prepared to resort to extreme tactics in order to silence and even exterminate rebels and defectors. The film opens up with a car stopping under a busy underpass. As other vehicles drive past above, a battered corpse is removed from the boot. The symbolism is clear: Life goes on as usual as the rulers carry out their dirty operations from just below. The tactics of the secret service and the surveillance police resembled a mob.

The position of the Vatican was very ambiguous: while it demanded that followers did to engage with political organisations, Pope Paul VI himself collaborated with the regime in order to safeguard institutional protection essential for the continuing. existence of the hierarchical Church.

This is a movie about individual morality. The oppressors constantly warn students against “brothers who strayed from the righteous path”, and instead commanded them to obey in silence: “The Lord is a friend of silence. Plants and trees grow in silence. I therefore declare silentio in this seminary”. 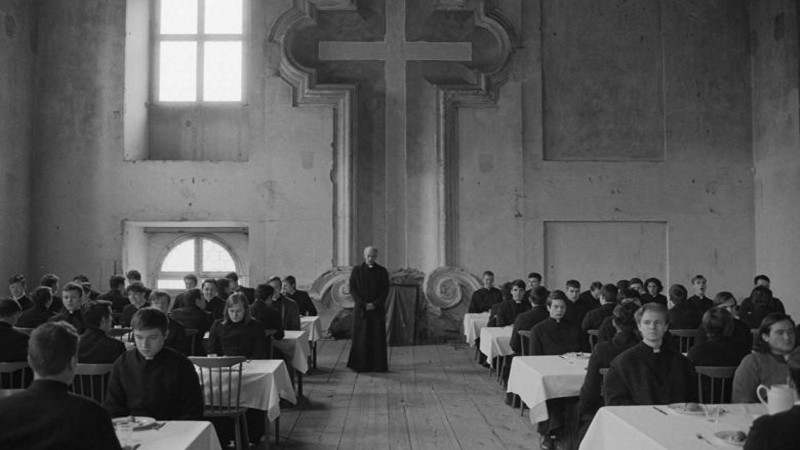 The young, scrawny and vulnerable-looking Juraj and Michal are left to decide whether to abide by the corrupt rules, or follow their personal instincts risking illegality, persecution and even death. Their vulnerability is emphasised in a sequence in which Juraj in made to strip in front of his uniformed oppressors. The two young man are stuck between the sword and the wall. Their predicament raises an urgent question about the very essence of their religion: does Catholicism mandate obedience or subversiveness? Jesus Christ was a profoundly subversive person, yet the modern Church seems to frown upon – even punish – any sort of subversive behaviour, not aligned with its strict doctrine.

An internal courtyard where students play football also has a pronounced symbolism. The area is filmed from above, the square walls are exactly the same shape as the unusual ratio of the movie frame. Novices are imprisoned in an inescapable existence. There is no escape, except perhaps for a brief ball game. This is just one small example in a film dotted with aesthetic lyricism. Constant sounds – breathing, praying, singing, humming and a creepy choir that sounds almost as panting and gasping – add the final touch to this highly atmospheric film experience.

On the downside, the narrative of Servants is a little confusing. Our protagonists barely talk – presumably for their own safety plus the environment isn’t conducive to open communication. As a result, the narrative gets diluted in the poetic and aesthetic devices, and the plot/context is at time a little difficult to follow.

Overall, this is a masterful and impressive communist period drama, akin to Pawel Pawlikowski’s Ida (2103) and Cold War (2018).

Servants is out on Curzon Home Cinema on Friday, May 14th. At the same time it will also be shown as virtual cinema screenings at some selected sites including Home Manchester and ArtHouse Crouch End.

Biopic of Czechoslovakian healer who treated both commoners and prominent politicians offers insight into the life of a very peculiar practitioner - now also available on BFI Player [Read More...]

In the name of the fatherland? In the late years of the Iron Curtain, a woman has to give up her personal life and even her own body in favour of athletics and the Communist regime - watch it right here and right now! [Read More...]