"Greasy movie"
A Jew pretends to be Persian in order to avoid death in a concentration camp, only to be forced to teach the language over which he has no command - on Amazon Prime on Sunday, April 18th (and also on other platforms)

WW2 historyis replete with innumerable stories from Jewish survivors of the Holocaust. Several books have been written and many movies have captured the atrocities of the Nazis in concentration camps as narrated by these survivors. The gruesome tales were documented by the liberation forces after the end of the War and many survivors helped authorities in listing down the names of fellow inmates whose records were wiped off from the Nazi registers.

Over the years, cinema has given us some remarkable movies about the Holocaust, in which we witness the resilience and tenacity of the human spirit that helped many Jews to survive the horror. There are many stories about Jews using their wit and smart-thinking in order to to survive the Holocaust. Canadian director Vadim Perelman’s latest film Persian Lessons is based on one such short story written by Wolfgang Kohlhaase. The film highlights the use of creative thinking, memory and intelligence by a Belgian Jew Gilles (Nahuel Perez Biscayart) in his survival tactic against his Nazi imprisoners.

The year is 1942. Gilles is arrested by the SS in Germany-occupied France alongside other Jews. The other Jews are shot dead but he manages to dodge the bullets. He narrowly avoids execution by swearing to the guards that he is not Jewish but Persian, and produces a Persian book belonging to a fellow Jew as proof. This lie temporarily saves him and he is brought to a concentration camp by the SS guards. But then Gilles is assigned a seemingly untenable mission: to teach Persian to Koch (Lars Eidinger), the officer in charge of the camp’s kitchen, who dreams of opening a restaurant in Persia (Iran) once the War is over. Gilles finds himself having to invent a language he doesn’t know, word by word. Gilles becomes acutely aware that one false move could expose his swindle.

This is a remarkable story is hardly plausible. When Gilles is brought by the guards to Koch and he tries to confirm if Gilles is a Persian and not Jewish, he asks rather simple questions to him, like “What is the capital of Persia?” and “What language is spoken in Persia?”. Koch also believes Gilles’ false German translation of the ‘Farsi’ words written in the Persian book. This failure of due-diligence by such a sharp high-ranking Nazi officer can still be overlooked. The inability of a few SS officers to call out his bluff seems like a major flaw in the script. 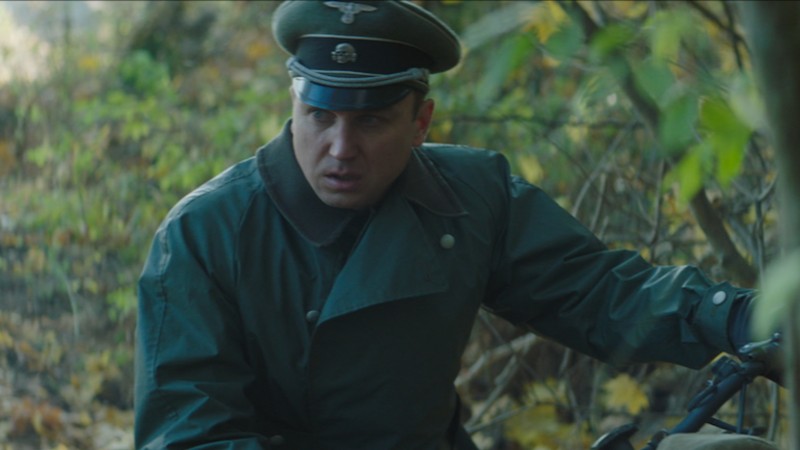 Despite these loopholes, Persian Lessons makes for an engaging watch. Gilles has to evade the pervasive threat hanging around his neck. One mistake and that is the end of his life. When given the task by Kolch of writing down the Farsi translation of 40 German words, Gilles inventively uses the names of his fellow inmates logged in the register as the corresponding Farsi words. Thus begins the process of memorising the names of all incoming Jew prisoners in the camp and associating each one with a German word characterising their situation. Gilles memorises 2840 names of Jewish prisoners that would have otherwise been lost forever with the burning of all record books the Nazis when they deserted the camp. The finale of the film is powerful and has a strong emotional impact.

The highlight of Persian Lessons is the commendable performances by its two leads. Nahuel Perez as Gilles is splendid in his role as the traumatised and perennially scared Persian impostor. Lars Eidinger as Kolch portrays the complicated character with perfection. The makers of the film show us the brutal and uncompromising Nazi sideas well as moments of kindness and sensitivity, thereby humanising him. After developing a bond of trust and companionship, he asks Gilles to not address him as Hauptsturmführer Koch but by his real name “Klaus Kolch”. A fine and engaging piece of work, despite the implausibilities.

The story of Anne Frank is packaged for the smart phone generation in this robust, albeit familiar documentary featuring Helen Mirren - now on Netflix [Read More...]