"Greasy movie"
Documentary sheds on the life of the flamboyant and openly gay American writer, with a focus on his unfinished novel Answered Prayers - on VoD on Friday, January 29th

Truman Capote was immortalised on screen by Philip Seymour Hoffman’s Oscar-winning act in the film Capote (2005). Much of what I know about the iconic gay writer is through this biographical film based on Gerard Clarke’s eponymous book, published in 1988. Many like me haven’t read a single book or short-story by Capote but have watched Bennett Miller’s immensely popular film. But for those who have read the writer’s acclaimed works like, In Cold Blood, Breakfast at Tiffany’s, etc. and know a bit about his life through the internet and magazines, might not find the documentary The Capote Tapes, too revelatory.

Thirty-five years after his death comes this documentary which tries to shed light on the American writer through never-before-heard audio archives and interviews with Capote‘s friends, acquaintances and enemies. With unprecedented access to George Plimpton’s taped interviews, The Capote Tapes features interviews with Dick Cavett, André Leon Talley, Jay McInerney & Dotson Rader and introduces audiences to Kate Harrington, who was the daughter of one of his male lovers, John O’Shea. Never having disclosed any details before, Kate opens up about living life with Truman Capote (her surrogate father) during this period and sheds new light on his character through their close relationship.

Capote‘s colleagues at The New Yorker (where he worked as a ‘mail clerk’) also talk about the times spent with him. As an entertaining and empathetic individual, he was able to make friends easily. One of his close female friends reminisces about their movie-watching outings in Pickwick theatre from where they used to be thrown out regularly for breaching discipline. One to gain the trust of women easily, they confided in him and felt secure in his company as his sexual orientation put them at ease. At a time when being homosexual was considered taboo, Capote never shied away from being openly gay.

His debut semi-autobiographical novel Other Voices, Other Rooms, was considered revolutionary for its time as literature on homosexuality was scarce until then. The success of his first book catapulted Capote to the upper echelons of New York’s social circuit. His unique squeaky voice, effeminate personality, lively nature, catty and entertaining banter, made him a regular invitee at the biggest parties of showbiz, and talk-shows. Gossip columns used to nudge him for bitchy and amusing remarks on celebrities, and Capote played along. In one of his controversial interviews to a talk-show host, Capote exclaimed that Marlon Brando was a majestic actor but a dumb person. Throughout his glittering literary career, he kept the company of top celebrities, editors of fashion magazines, writers, and media moguls. This was the kind of lifestyle his mother had always aspired for, and Capote was living her dream.

We travel back to Capote‘s lonely childhood in Monroeville, Alabama where he grew up with his maternal aunts. His parents had divorced when he was four and the young boy found solace in writing at a very early age. Harper Lee, who would also go on to become an acclaimed writer, was his neighbour and both were best friends during their childhood days. The Capote Tapes reveals how at the age of eight, Capote moved to New York to live with his mother and step-father Jose Capote from whom he inherited the surname. His mother could never come to terms with the fact that her son was a homosexual. Capote‘s romantic relationships weren’t all lovey-dovey, either. Kate Harrington, his adopted daughter, narrates some of the rocky incidents during his affair with her dad who was also his manager for a long time. 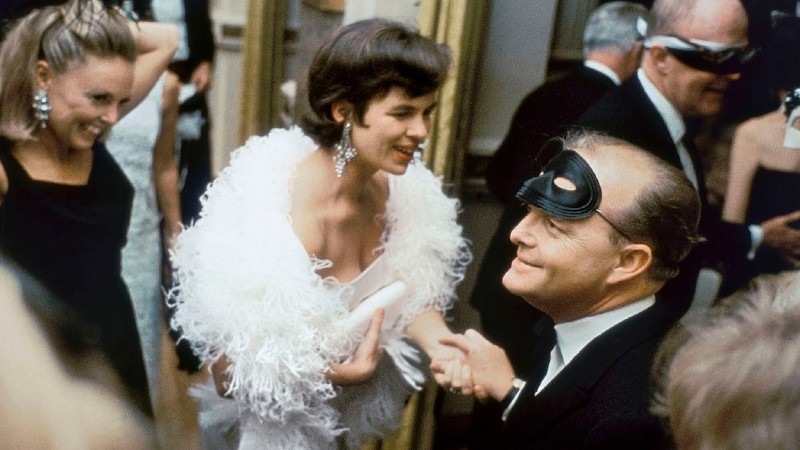 The documentary also taps into the archival tapes spotlighting Capote‘s indulgence in vanity. Drugs, alcohol and excessive partying were staples in his high-adrenaline lifestyle. He is credited with throwing one of the biggest parties ever in New York. A masked ball-room event in the Plaza Hotel, where the creme de la creme of high society was invited, stamped Capote‘s social authority among the rich and famous. Celebrities and leading socialites from all parts of the world attended this mega-event including Princess Luciana Pignatelli who grabbed the headlines for wearing an extremely expensive jewel on her forehead. The jeweller who had rented out the jewel also sent two armed men to escort her at the event and safeguard the heavily prized item!

In the final act of the documentary, the discussion veers towards Capote‘s unfinished novel Answered Prayers, that sparked his downfall. An epic portrait of New York’s glittering jet-set society, the novel was meant to be his greatest masterpiece. Capote‘s years of socialising with the rich and famous: their revelations to him, all their secrets and gossips that he was privy to, would all be fleshed out in his book. He wanted it to be bigger than Marcel Proust’s In Search of Last Time – hugely popular for capturing the lives of Parisian high society and aristocracy. The first look of Answered Prayers (an excerpt of three chapters) created ripples in Capote‘s elite social circle. Many of his ‘friends’ were offended by his expose of their private lives and the secrets they had revealed to him in confidence. They felt he had broken their trust and exploited his proximity to them. Only the ones who treated the novel as fiction stood by him. The fallout of these friendships didn’t affect Capote much as he had anticipated the backlash. The only socialite who he regarded as a dear friend in his life was the American style icon, Babe Paley. Her death had shattered him as they both shared an extremely loving bond.

Through the various anecdotes in The Capote Tapes, the director Ebs Burnough (former Advisor to First Lady Michelle Obama) has tried to portray a holistic personality of the controversial genius writer. Behind the persona of a high society hobnobbing magnet was a sensitive and rooted individual for whom love took precedence over fame and money. If not for these interviews of his loved ones and especially that of Kate Harrington, we would have probably never understood the human being behind the enigma.

The Capote Tapes is out on various platforms on Friday, January 29th.