"Filthy genius movie"
Professional tree climber Zoe is set to travel overseas, when a pregnancy changes everything she's worked for in her life - New Zealand comedy is on Digital on Friday, January 22nd

The first thing you should know about Baby Done is that yes, it is a film about babies, and yes, as a treatise on biology, it showcases the many unflattering elements that come with childbirth. There’s the belching, the farting, the aging and crying that comes part and parcel with the voyage every potential parent sets for themselves. And between these squabbles over baby clothes, baby showers and baby motions comes the birth of a new cinematic genre.

The film is set in New Zealand where Zoe (Rose Matafeo), a buoyant climber of mixed racial heritage, discovers she’s pregnant. Her parents are surprised – they’ve never seen her as the “type”. Sports, leisure and alcohol have suited her better than the maternity robes that she’s set to wear. She’s determined to keep the news a secret- her friends think she’s a bit fat anyway.

In keeping with the film’s familial aesthete comes Matthew Lewis’s Tim, an energetic, frequently exasperated, man holding true to the burdens of parenthood and passion. Tim discovers the nature of his girlfriend’s condition while preparing himself for a bungee jump. 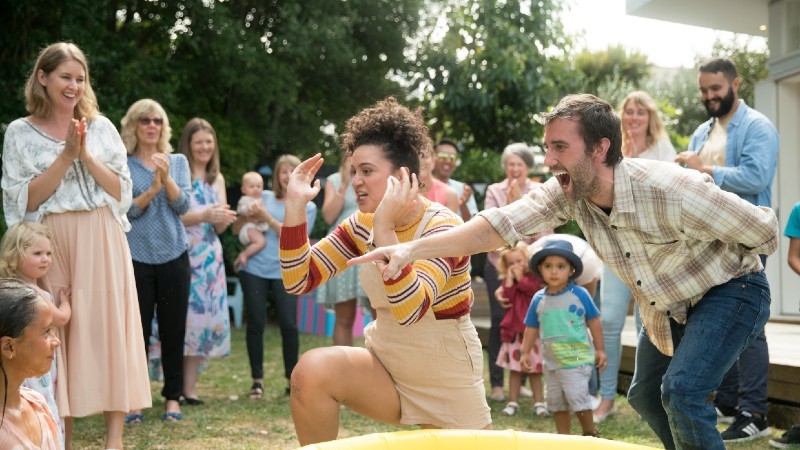 Caught in hysteria of the moment, Tim finds himself suited to the role of cautious, clear-headed role nominally reserved for mothers, while the more frivolous, free spirited “father” figure is a role that fits Zoe better. She rebukes his many guidances to tailor herself more appropriately: she still eats dry meats; climbs whatever tree is available to her; and disguises her growing baby bump with the thickest jackets in her wardrobe. The transition from able bodied athlete extraordinaire, to baby-carrier is one she finds difficult, as the loose, limber body that easily slid between doors lets her down in the compact confines of a nightclub cubicle.

We’ve rarely seen this attention to childbirth since pastoral indie flick, Juno (Jason Reitman, 2008), but this has wider depth. There’s a father embracing the possibilities his parents failed to provide him with; there are grandparents sizing their daughter’s belly for potential time frames; and then there’s the freewheeling Zoe, imparting the sexual fantasies her partner holds, in various forms of gestation.

It’s not an explicitly feminist apotheosis, but it essays mothers at their most urgent, urbane and undressed. “I want a baby,” Zoe says; “I just don’t want to be a mum.” Determined to keep her head up, Zoe searches for “pregnancy fetishes” on the internet. But however reluctant she comes across, or how difficult she appears to her boyfriend, Zoe is never anything less than charming, and beneath the feisty veneer comes a human equally as ecstatic as she is terrified to bring another human to the world. It’s a singular performance in an excellent film, and one that emanates from a place of tremendous truth. On the basis of this film, there are other unexplored mainstream audiences should be treated to. Baby Done demonstrates a familiarity with the familial genre, but with a sparky bite that feels more truthful and contemporary. The major difference between Baby Done and previous pregnancy dramas isn’t that it glorifies parenthood, but empathises with it. Baby Done is a masterpiece of indie cinema.

Baby Done is out on Digital on Friday, January 22nd.