Like Good Kill (2014), David Verbeek’s film concerns the ethics of drone strikes and the toll it takes on those who operate them. Our focaliser is Ivan (Gregoire Colin), a French drone pilot working for the US military whose job calls for him to kill people on the other side of the world. Despite his remoteness, Ivan feels their presence on an acutely personal level. He wants to know their names and how to pronounce them. He traces his drone activity on Google Maps too, locating the buildings he’s destroyed. All of this, of course, results in self-flagellation.

Verbeek establishes a meditative quality in this opening chapter, using the sparse diegetic sound of Ivan’s home and the surrounding Nevada desert to compliment Frank van den Eeden’s still, lingering camerawork, capturing the vacancy of the protagonist’s life. This realist quality changes when Ivan destroys a building that transpires to be a school, traumatising him even further and sending the film in a surrealist frenzy where reality and fantasy are hardly distinguishable. However, the thread running through it all is unmistakable; after being conditioned by screens and protocol, Ivan wishes for tactile reality. 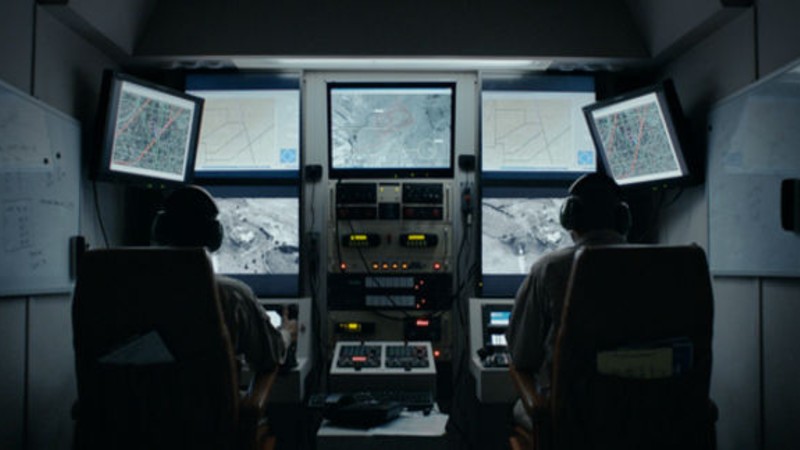 It’s easy to get lost in the dreamscapes that follow. We see Ivan living off the land, draped in cloth and making fires like a hunter-gatherer. Then he’s back in France, working as a baggage handler by day and undertaking a brutal martial arts regimen by night. All of it, real or illusory, is Ivan’s attempt to break the catatonia of his life, to heal his guilt with some kind of catharsis – “I just have the feeling that I… need to be reborn”, he remarks to a priest.

This story of male alienation and disaffection has flavours of classics such as Taxi Driver (Martin Scorsese, 1976) and the Fight Club (1999) but Full Contact does not achieve its full potential. However, the enigma of David Verbeek’s psychotic vision of guilt and trauma, along with the arresting trance of its visuals, will appeal to many viewers.

You can watch Full Contact during the month of December from the comfort of your home only with ArteKino – just click here.