The colouring, imagery and Haboro font of Love Me Tender’s poster displays strong indie-style quirkiness. It takes some 40 minutes to reach this quasi-Wes Anderson territory – a regression, in my opinion. What precedes it is an interesting and earthy depiction of mental illness.

Seconda (Barbara Giordano) is in the depths of agoraphobia, living in a cramped apartment with her mother and father, both of them dejected by her presence. We see only a glimpse of how they interact, but it seems that Seconda spends her time either sleeping or prancing excitedly as part of some hyperactive exercise regimen.

She has no qualms about her presentation either, darting around in only knickers and a leotard, which she adjusts – her right leg hoisted on an armchair – in full view of the camera. We also see her floss her teeth and smell the gunk afterwards. Then there’s the moment Seconda picks her nose as she receives a phone call from Henry (Gilles Privat), a demented admirer who professes his love for her ‘swan like elegant gestures’, such is the film’s dry, earthy sense of humour.

These moments provide both solid character development and a realistic observance of mental illness. We see the grind of Seconda’s neurotic existence, the crushing boredom of her non-routine and her palpable fear of the outside world. All of this is fatally compounded when her family abruptly leaves, forcing her into an existential struggle.

Of course, she starts by napping in the face of this adversity, glaring at the door every 20 seconds or so, convinced that her father may return at any point. This becomes unsustainable as the kitchen cupboards empty, yet she continues to resist leaving the apartment, eating cat food and expired tinned tomatoes from the cellar. Her only interaction with the outside world, at this point, is throwing small objects at people from her bedroom window. 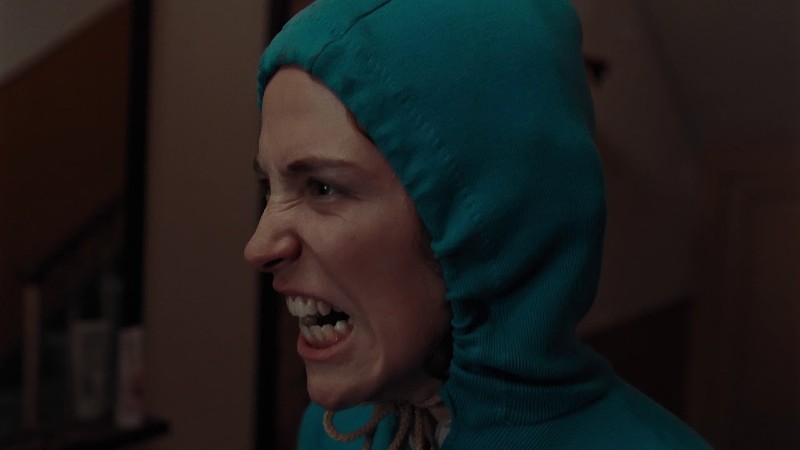 When Santo, a self described “guy who picks up bottles”, knocks on the door asking where Seconda’s mother is, she drags him into the flat and implores him to assist her death – “I’ve got a very strong survival instinct, unfortunately.” The film takes on a Harold and Maude (Hal Ashby, 1971) quality, with a similar brand of suicide fantasy and pitch black humour. However, what follows breaks the empathy you may have had for her inveterate agoraphobia. Suddenly emboldened and fearless, Seconda leaves the apartment clad in a bright blue onesie that resembles a telletubby, which seems to be some kind of hazmat suit for her.

Her agoraphobia appears forgotten as the film abandons much of what made it an interesting character study. Instead, it opts for quirk and improbable silliness, such as with Henry – who goes from abusive debt collector to infatuated buffoon. There’s also a dash of surrealism with one character, a feisty preteen girl, who serves as a clear doppelganger of the young Seconda.

The zaniness climaxes in a musical piece, with Seconda doing her most eccentric routine to imaginary music and disco lights. It’s a display of empathy, perhaps, for those who experience such vivid hallucinations.

You can watch Love Me Tender online for free during the month of December only with ArteKino – just click here!