"Dirty gem"
The disused Tempelhof airport of Berlin has now become home to refugees from all over the world; their stories are as fascinating as the airport's history - watch it for free in December only with ArteKino

For most people an airport is a transitory place. It is where they spend a few hours when they travel. Some might even stay overnight, if you miss your flight and are forced to sleep in the terminal (like it one happened to me once, and I wouldn’t recommend the experience to anyone). For refugees in Tempelhof Airport of Berlin, the transit is far more extensive. They can spend weeks, months or even years living in the hangars before their future is determined by German authorities. They come from places as varied as Syria, Afghanistan and the Donetsk region of the Ukraine.

Tempeholf is a magnificently ugly, oppressively calm and yet strangely liberating place. Central Airport THF quickly delves into the building history in the beginning of the film. Some sort of tour guide shows the gigantic building to attentive visitors. We learn that the Airport was originally built in the 1920s, and it was intended to become the world’s biggest and most impressive, had Hitler won the War. We are then abruptly brought back into the present, where the building is used as shelter for refugees. 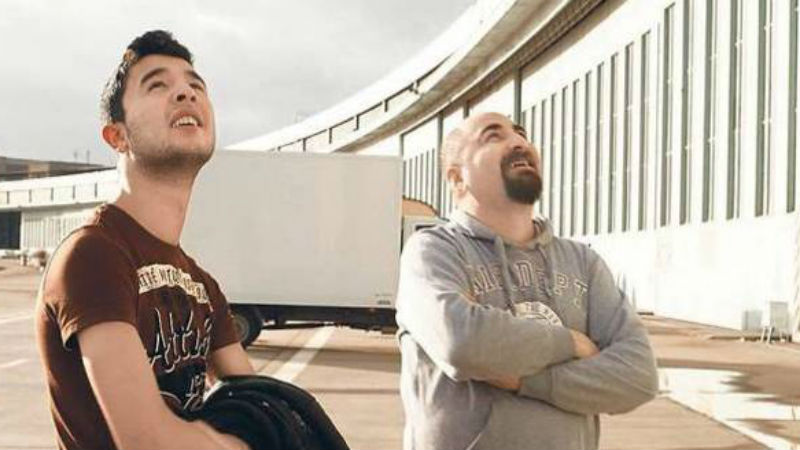 The Brazilian-Algerian filmmaker Karim Ainouz knows what it means to be a foreigner in Berlin. He’s an immigrant himself, and his previous film Futuro Beach (2015) also deals with an exile living in Berlin. Three years ago, the Brazilian fictional character Donato migrated by choice. The people in this documentary, on the other hand, are not fictional and they did not leave their countries by choice. They fled a deadly conflict. But the two films also have elements in common: the rupture for the immigrant/refugees equally traumatic and likely irreversible, plus the destination (Berlin) is a cold and barren place, and yet unexpectedly welcoming.

This isn’t just a film about people. This is also a movie about an incredible building, which is now home to refugees and also also a leisure ground for German families at the weekends. People cycle, have barbecues and children fly kites right next to the hangars inhabited by an undisclosed number of refugees (the same portrayed in Ai Weiwei’s Human Flow, from last year). Everything is awkwardly harmonic. The Germans are extremely efficient, and it’s clear that these people receive good medical and psychological treatment. Some bemoan their situation, which is quite understandable: while comfortable and safe, this is hardly a private and homely place. Others express contentedness and gratitude. An older Syrian man says Tempelholf is like a retirement in heaven. 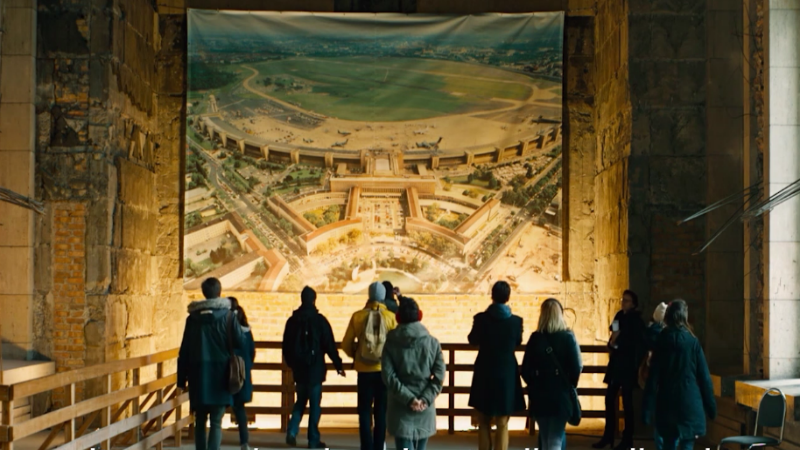 There’s even an apiary in the airport, for some unexplained reason (in fact, most of the film except for the short history lesson in the beginning isn’t contextualised, leaving viewers to join the puzzle pieces). The wooden slate for the hives are similar to the refugee hangars and also representative of German efficiency: they are very densely populated and yet feasible.

The camerawork in Central Airport THF is almost entirely static. The helmer remains behind the camera. There is no voice-over. The concourse, the hangars and the runway of the airport are vast, dark and intriguing. Some aerial shots are splendid. All in all, the images are gripping and soothing. This is the temple of gloom that miraculously harbours life and hope of a new start. It also is the perfect paradox: the airport that once epitomised Hitler’s global ambitions has now become a symbol of Angela Merkel’s “Refugees Welcome” policy.

Central Airport THF showed at the 68th Berlin Film Festival in February, when this piece was originally written. It is available on ArteKino for free during the entire month of December, 2020 – just click here.

Why are we failing so many fellow human beings? Chinese artists's eagerly awaited doc takes looks at the shocking plight of refugees in various corners of the planet, in a heartbreaking 140-minute journey - now on all major VoD platforms [Read More...]