"Filthy genius movie"
We could all do with a lesson or two in romance, particularly when you're better used to the hide of a cow than to the thighs of a loving woman - available to watch for free in December only with ArteKino

Italy, the country of renaissance, religion and rhetoric, is the subject of Chiara Campara’s quietly beautiful Lessons of Love, a story steeped in culture and contradiction. At the centre of this story is Yuri (Leonardo Lidi), a rural farmer searching for a meaning beyond the mouths of the cows who have fended him, much as he has fended them. At 30 years of age, Yuri is seasoned enough to have mastered the craft of farming, but still seems young enough to find love in a city even wilder than the animals he and his father hold.

There, he meets Agata, a striptease artist anxious to open up his body to pleasures emanating beyond the physical. They go driving, drinking and dancing, and although his girth does not lend itself naturally to the rhythms of a hoe-down (yes, you read that right!), his enthusiasm and good will endears him to Agata’s wilful eye. But beneath the trappings still stands a boy committed to the farmland that has proved both his work and home life. He’s facing a precipice that leads him from a life of tillage for a future spent in another’s guiding arms. 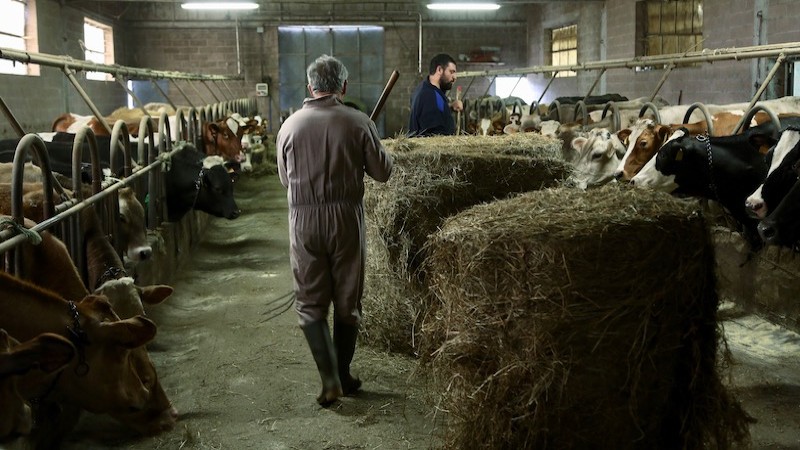 Detracting viewers from the gondoliers that decorate an Italian travelogue, Campara plants us headfirst into an Italy distracted by commerce, concrete and change. Earmarking himself as a lothario, Yuri posits the town’s nightclubs with a burger wrapper propped in his tattered, torn down trouser pocket. His family are concerned for his well being, considering him a parson pushing to the limits of supposed prime. Love comes to him, not on the side of a dance floor, but through the thoroughfare of a private woman’s quarters. Propositioned to join another dance, Yuri is encouraged to buy a pair of Texas boots, shifting the focus away from the calves he hugs daily to the calves that will have to adjust their patterns to the sound of a continent far, far away.

American cinema (frequently based around Italian immigrants) shadows the work, as characters wade in and out of a country that once worked to a different beat. Songs, sung entirely in English, echoes the journey Yuri faces, illustrating an arc more often found in the “coming-of-age” dramas that litter Hollywood’s growing hall of work. Behind him. an Italy (moulded as concretely like the farmers from which the country was founded on) fades into a silhouette of serene-frequently beautiful- montages of crisp, clean cutouts. Campara has conjured a work that adds to the Italian mythos, from a spiritual and also from an emotional perspective. By doing so, it has created their own renaissance, religion and rhetoric.

You can watch Lessons of Love for the comfort of your home and for free during the entire month of December along with another nine titles only with ArteKino – just click here for more information.