"Greasy movie"
The Hollywood actor seeks a blood-spattered redemption on the wrestling ring, as he grapples with his faltering career and tragic personal life - documentary is on VoD on Monday, November 23rd

If you are a fan of American professional wrestling, the name David Arquette will stir up some resentful feelings. To those outside of the world of body slams and baby oil, it’s one of the more peculiar stories in entertainment history. The year is 2000, and 28-year-old David Arquette is riding high from the success of the Scream films and rom-com Never Been Kissed (Raja Gosnell, 1999). The actor is starring in new wrestling-themed comedy Ready To Rumble (Brian Robbins, 2000), co-produced by World Championship Wrestling (WCW), at the time the biggest rival to industry icon WWF (now WWE).

As part of the promotion, Arquette appears in storylines on WCW television, inexplicably winning its prestigious World Heavyweight Championship. Among wrestling purists, it is viewed as one of the worst storylines ever produced, a moment that played a significant part in WCW’s eventual demise in 2001, and one that the actor (a wrestling fan himself) reportedly regrets.

Fast forward to 2018: at 46, the actor chooses to make a return to wrestling as Magic Man David Arquette. It’s partly to redeem himself to fans who detest him, but also to engage with a moment that he views as the point where his career began to decline. As he enters the violent independent wrestling circuit, it becomes clear that dream is going to be more difficult than it sounds.

Other than a wrestling history lesson, the first half hour deals with the question that’s probably foremost on your mind: what happened to David Arquette? The answer is a little bit sad. His career is, in his own words, “pretty crappy”, a struggle that has been compounded by complex mental health problems, addiction issues, and a recent heart attack. We see him consult with doctors who express concern for his wellbeing, with one scene showing him being treated with Ketamine to study brain activity.

It’s here where the documentary is at its best, looking at the man rather than the wrestler. Brief glimpses of his tragic family history paint a picture of a boy who always wanted to be loved. Patricia Arquette, appearing here as a doting big sister, looks through a family album and sighs “too many dead people in this book” before explaining why her brother is still child-like in his view on life. 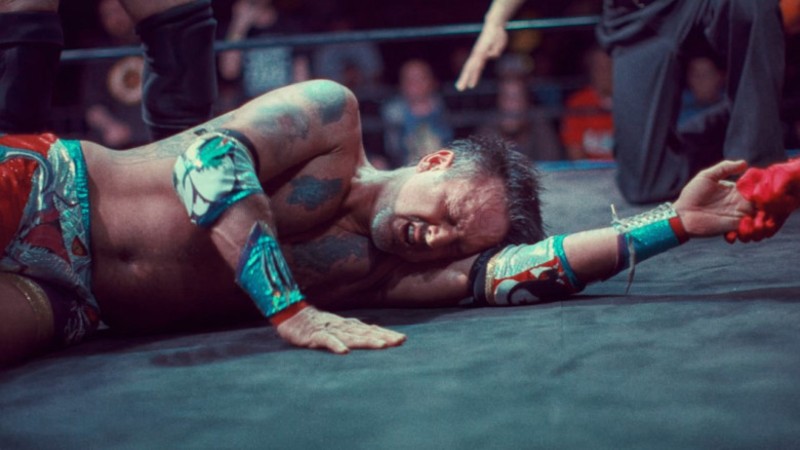 Professionally, Arquette feels beleaguered. His wife Christina McLarty points to a magazine cover in the mid-90s that put him alongside Leonardo DiCaprio and Will Smith as the new Faces of Hollywood, and yet a quarter of a century on he is widely regarded as ‘The Goofball from Scream’. “I’m just tired of being a joke, to be honest with you” he remarks, albeit while wearing a wizard’s cape on horseback. At the centre of this quest is a performer trying to work out why the crowds stopped cheering, but perhaps less aware of the role he had in his own downfall.

Unfortunately, his path back to wrestling feels artificial, like a higher calibre reality show set far from the pyro and big screens of WWE. Arquette begins at a backyard wrestling event with a rickety ring, heckled by a handful of locals (“Magic Man made his acting career disappear” yells one wit). He trains with wrestler-turned-yogi Diamond Dallas Page, and has bouts in front of traffic in Mexico, before announcing his return to a startled Hollywood. The narrative presents a Rocky-like route, but The Italian Stallion never wrestled in sticky looking LA bars. It’s unclear what the end goal is for Arquette – his aim of getting “the people” to stop booing feels intangible, and symptomatic of a greater sense of loss.

Having had glimpses into the actor’s mind, the question of whether or not he can hold his own against veteran grapplers just doesn’t seem that important. You want him to get the help he needs, and this has never been more evident than in a sequence where Arquette competes in a bloody ‘Death Match’ that goes too far. For a medium that is often dismissed as ‘fake’, things get a little bit too real as redemption and destruction start to look very similar.

You Cannot Kill David Arquette benefits from a great deal of honesty from its subject, and well-known contributors like ex-wife Courtney Cox, wearing a permanently concerned expression. However, despite an ending that hints at triumph, it’s clear that there is a far more personal journey that this film should have focused on. The main feeling you get coming away from the film is hope that he works out his issues, so that this is a new chapter rather than an epitaph.

You Cannot Kill David Arquette is out on VoD on Monday, November 23rd.

A Persian teen grappling with racism and an ailing mother in Ronald Reagan's US earns money through wrestling, in this poorly crafted and reheated pastiche of filmic styles - out on Monday, July 20th [Read More...]

Is there a beast inside of him? Drama investigates the blurry line between violence inside and outside the ring for an MMA fighter, awkwardly raising the question whether the sportsman is intrinsically brutal and savage - on DVD May 8th [Read More...]