"Dirty gem"
Effective and entertaining slice of life drama that shows how no opportunities and no recourse pushes UK youths to the brink - on Sky Cinema and NOW on Monday, July 12th

There is an industrial beauty to the Northern port town of Hartlepool. Container cranes and offshore turbines jut into the clouds as seabirds wheel on. Their steel artifice contrasts with the waterfront homes done up in those pastel colours obligatory for waterfront homes the country over. Small personal craft litter the waters, dwarfed by shipping giants. You can almost smell the brisk sea breeze coming off of the screen, tinged with the volatile tang of diesel.

A pretty scene isn’t nearly enough to survive on, though. Panning the camera just a little reveals the battered estates of a people left behind. A field of terraced houses where the only possible growth is that of the untended backyards. This is the true Hartlepool, a town where some zones have reached depressingly high child poverty rates of almost 50%. It is the setting of Looted, a grim drama that follows a day-in-the-life of Rob (Charley Palmer Rothwell), bent and nearly broken by a failing system. Single carer of his mortally ill father and not a whiff of gainful employment in this post-industrial British heartland. He’s no longer even close to ‘just about managing’ and judging from the news this an increasingly familiar scenario.

There is some joy to be eked from the concrete sprawl: bag of cans with the lads, spliff, kicking a footie against disused warehouses. The film opens with Rob and friends boosting a random car before tooling around the area, blasting choons and yelling at passersby. Here, the ready camaraderie between Rob and lifelong pal Leo (Thomas Turgoose) is evident from the off. Tommy T is almost exclusively known for his apprenticeship under Shane Meadows, in Somers Town (2008), This Is England (2006) and the serialised sequels thereof. A lot of Shane Meadows’s DNA is present in Looted, particularly in its easy, believable banter. Indeed, fast-talking, cheeky chappy Leo isn’t a million miles away from Turgoose’s roles therein, albeit with a much slyer edge and a quick-to-anger small man syndrome bubbling under the surface. He is the friend your parents wish you hadn’t made. It is Leo who brokers the dealing of the jacked car and then goads Rob into accompanying him on a bigger, ill-advised job that same night. 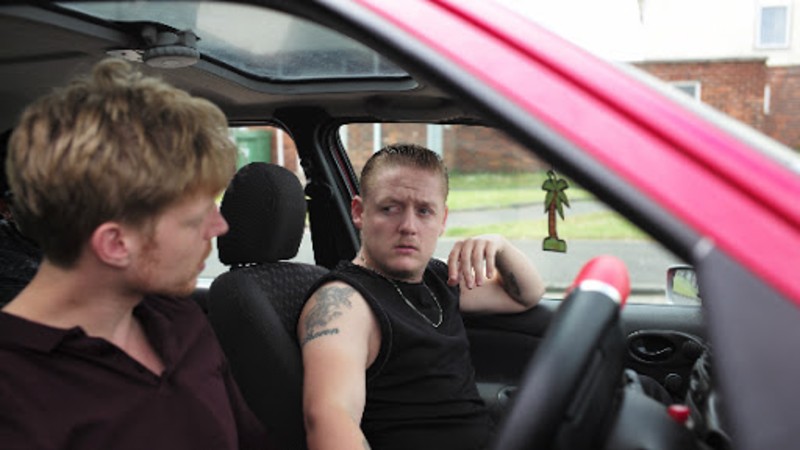 It’s quickly clear that there are few options open. Father Oswald is bed-ridden, staking all hope on a compo claim for his illness, contracted in the line of work at the very same port Rob and Leo are due to infiltrate. Looking for all the world like The Pogues’ Shane McGowan in his emaciated, twilight years (see Julien Temple’s Crock Of Gold, which premiered two months ago in San Sebastian), Oz extols the virtues of his life at sea, recalling rum-sloshed nights on far off coasts, piña coladas. The shipworkers union is no longer answering his calls. Rob is working double time to hide this news behind a veneer of falsified job interviews, helping Oswald to bathe, eat and shit. Their relationship is increasingly strained and it is clear that, despite Rob’s outward affability, he is not okay. Here, Palmer Rothwell is a revelation. From the accent to the defeated bearing, the bloodshot stoner eyes and disheveled formalwear… It is a powerhouse performance in the large and small moments alike and hopefully Looted gets a strong enough reception to place him in the awards conversation.

The same goes for debut feature director Rene van Pannevis. Cards on the table, the story of Looted is timely and urgent but also the kind of premise that makes for the bread and butter of hour-long ITV specials. For John and Karen Smith to catch on Sunday with their chippy tea, fodder for a quick coffee break chat on Monday (“Isn’t it just awful, the state of things!”), before forgetting all about it and returning to voting Tory and Brexit. Yet, there are plenty of contemporary flourishes in the sound design and cinematography that push Looted to greater heights. Here’s to hoping for more vital stories of Broken Britain from van Pannevis – there’s certainly enough to go around.

Looted is on Sky Cinema and NOW on Monday, July 12th. Also available on other platforms.

Shane McGowan gets the Julien Temple treatment with the help of a limelight grabbing Johnny Depp - in cinemas on Friday, December 4th; on VoD and DVD the following Monday [Read More...]

Craig Fairbrass stars as a highly manipulative personal trainer, in this standard British thriller set in Newcastle - on BFI Player; on Sky and NOW on June 1st [Read More...]