"Dirty gem"
Daniel Radcliffe and Daniel Webber star in this real-life drama about two white political prisoners who hatch an ambitious plot to escape from prison - on all major VoD platforms on Monday, March 7th

Ten years as the boy wizard brought Daniel Radcliffe fame and fortune beyond the dreams of avarice, yet it did not bring credibility. In a review of Horns (Alexandre Aja, 2014), Times critic Kevin Maher wrote, “you never want to rip into actors, they’re a sensitive bunch… and yet I really struggle with Daniel Radcliffe.” Even Radcliffe, ever the self-deprecator, described his work in the Half Blood Prince (David Yates, 2009) as ‘one-note’, ‘complacent’ and ‘just not very good’.

Mindful of his critics and no doubt the weight of child stardom, Radcliffe made a string of interesting script choices in the 2010s, with highlights including Imperium (Daniel Ragussis, 2016), an edgy thriller about an undercover agent infiltrating a neo-Nazi group, and Jungle (Greg McClean, 2017), a gruelling survival story set in the depths of the Amazon rainforest. Escape from Pretoria continues this trend of punchy, low-budget indies. Like the other titles, Pretoria is based on a true story, and what a story that is! Set in apartheid South Africa in the late 1970s, it follows Tim Jenkin (Daniel Radcliffe) and Stephen Lee (Daniel Webber), two white political prisoners who hatch an ambitious plot to escape from Pretoria Central Prison.

How does one escape from a maximum-security prison? Make your own keys, of course. In a truly remarkable display of will and ingenuity, Jenkin made nine copies of prison keys using timber he smuggled from woodwork classes. 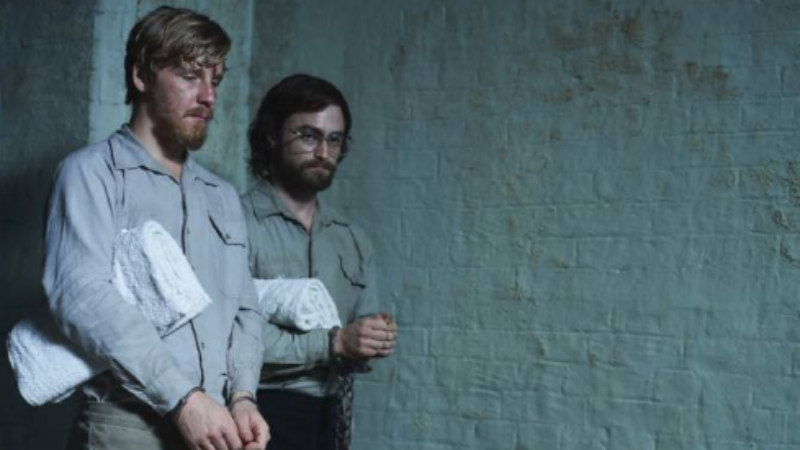 It was a plan riddled with setbacks, doubt and in-fighting – committing to it risked death – and Francis Annan’s film captures the weight of this predicament. It also explores the dynamics of political activism, namely the sagacious old guard clashing with the daring new.

This old guard is led by Denis Goldberg (Ian Hart), the resident ANC leader who chaperones Tim and Stephen into prison life. Goldberg’s reputation precedes him as a political leader and there is mutual respect among the ANC inmates. However, relations are strained when the escape plot consumes the younger men, with Goldberg’s faction believing it reckless while Tim and Stephen seeing it as essential for the cause.

The sparring revolutionaries’ heated exchanges reflect the nuance of the script, which is adapted from Jenkin’s book Inside Out: Escape from Pretoria Prison. The men are united by their existential cause, yet the plan raises difficult, personal questions of how to lead it.

Despite the chemistry of ANC prisoners, Pretoria could have benefitted from a harsher edge and better developed captors; 12A-rated content and thinly drawn antagonists means the tension does not reach the fever pitch of Midnight Express (Alan Parker, 1978). Nevertheless, the movie remains a solid prison thriller with enough risk, danger and remarkable source material to be a compelling watch. Also, Radcliffe further proves both his acting chops and a flair for accents.

Escape from Pretoria is in cinemas on Friday, March 6th. On all major VoD platforms on March 7th, 2022.

Dirtylicious twists drive the narrative of this American survival thriller about three friends stranded on a yacht and grappling with tension and trust - from FrightFest [Read More...]