One of the great achievements of the British historical drama Misbehaviour is that it recreates a single event on which two separate stories hang. The 1970 Miss World competition coincided with the rise of not only the nascent women’s liberation movement but also increasing international unease with South Africa’s Apartheid regime. The pitfall awaiting anyone writing a script about all this (or directing one) is that it means constantly walking a tightrope, getting the balance right so that justice is done to both intertwining narratives. It is to Misbehaviour’s great credit that it manages to pull off this difficult feat.

On the one hand, Women’s Lib activists would disrupt the ceremony with flour bombs after claiming it was nothing more, nothing less than a cattle market. On the other, there were two entrants from South Africa, one white, one black. Although the London-based Miss World was a popular annual event begun in 1951 which by 1970 had become a regular fixture in the television calendar, it was open to charges of both objectifying women and tending to favour white winners (notwithstanding the fact that Miss World 1966 was an Indian, a fact omitted here).

The two narratives are very much an insider’s and an outsider’s view of the contest. The insiders are the organisers Eric and Julia Morley (Rhys Ifans and Keeley Hawes), their special guest star Bob Hope (Greg Kinnear) and his savvy wife Dolores (Lesley Manville), and last but most definitely not least the contestants, most notably favourite-to-win Miss Sweden (Clara Rosager) and two black contestants Miss Africa South (Loreece Harrison) and Miss Grenada (Gugu M’batha-Raw). The outsiders are the Women’s Libbers, an Islington collective headed by force of nature Jo Robinson (Jessie Buckley) joined by University College London history student Sally Alexander (Keira Knightly) who gets volunteered into becoming the group’s press spokesperson for TV talk shows. 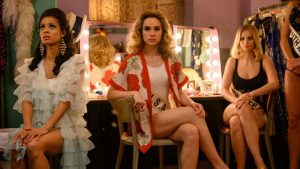 The presence of two Miss South Africas represents a shrewd strategy by Eric to avoid an anti-Apartheid boycott of the contest. He and his wife are putting on a show / running a business and trying to make everything go like clockwork. The white Miss Sweden can be seen chafing against the establishment nature of the event while the two black girls are glad to be there but convinced neither of them has a chance of winning. Dolores Hope, meanwhile, is well aware her husband has an eye for the ladies and Manville’s astutely observed performance makes it very clear that she not he wears the trousers in their relationship.

The pleasures on offer here are many. The script is clever, the casting smart, the production design spot on. Articulate and intelligent student Sally is seen sidelined by male tutors and students purely on the basis of gender, told for example that to write a thesis on female workers is ‘niche’. All this fuels her as the token protester on panel discussions at the oh so establishment BBC. She is also the one who gets Jo and her fellow protesters to dress down so that when they turn up with tickets they won’t get refused entry to the contest. Kinnear exudes just the right of smarmy charm as celebrity Hope. Ifans generates a seedy respectability as instigator and organiser while Hawes as his wife comes across as a shrewd businesswoman who won’t stand for any nonsense and sticks up for the contestants. 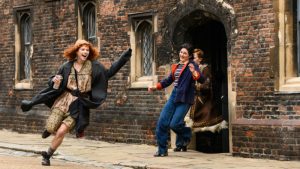 From early close ups shots of 1970 ladies’ boots, shoes and dresses through creches with men looking after the kids for their female activist partners to the interior of the Princess Theatre where the contest takes place (presumably the real life location the Albert Hall wouldn’t give permission for filming), you feel like you’re back in the London of 1970. (I speak as one who was a pre-teen in London at the time: watching it felt like I was really back there again.)

Director Lowthorpe brilliantly pulls it all together in a film which understands the issues as they were then and as they are now. It may be hard for today’s twentysomething feminists to understand what the world was like at that time, but this film will give you a pretty accurate idea of not only the fashions and the complicity, but also the rebel mindset that started to take it all apart. As a title at the end mentions, the Patriarchy still needs taking down one event at a time. Wherever your head is at, watching Misbehaviour is a good place to start.

Misbehaviour is out in the UK on Friday, March 13th. On VoD from Wednesday, April 15th. Watch the film trailer below:

When a rookie cop with a body cam witnesses fellow officers commit a brutal murder, she must get the incriminating footage back to the station before they can stop her - now available on VoD! [Read More...]

Rockumentary celebrates an often-overlooked avant-garde artist, who excelled in pure rock'n roll audacity nearly five decades ago and still continues to do so - now available on VoD! [Read More...]

A woman becomes a judge at a time when women in such professions is unheard of – from the London Korean Film Festival [Read More...]