"Filthy genius movie"
Is Jacques Becker's masterpiece indeed "the greatest French film of all times"? Our dirty writer Alasdair Bayman takes a fresh look at the highly subversive and innovative flick, and reflects on topics of honour and incarceration - now on DVD, BD and EST

To many critics and audiences alike, a director’s continual legacy in the filmic canon rests upon their final film. Kubrick went out on Eyes Wide Shut (1999), Hitchcock on Family Plot (1976), and Billy Wilder on Buddy Buddy (1981). Simply from this random selection of great directors’ last films, it’s quick for one to see the varying degrees of quality which a filmmaker associated towards greatness can go out on. In the case of Jacques Becker, Le Trou is a complex statement on man’s continual stride to be free from oppression. Based on a true Parisian prison breakout, Studiocanal’s remastered Blu-ray, along with many more of Becker’s work, symbolises his position as a definitive voice in cinema.

Opening with Roland Darban (Jean Keraudy) breaking the fourth wall and notifying the viewer retrospectively on an elaborate prison breakout in 1947, Becker treats the audience with respect and does not over elaborate on plot; this is a film simply about five men trying to find freedom and its repercussions. No backstory is required on any of the men’s charges, they are criminals to us with that all that mattering. 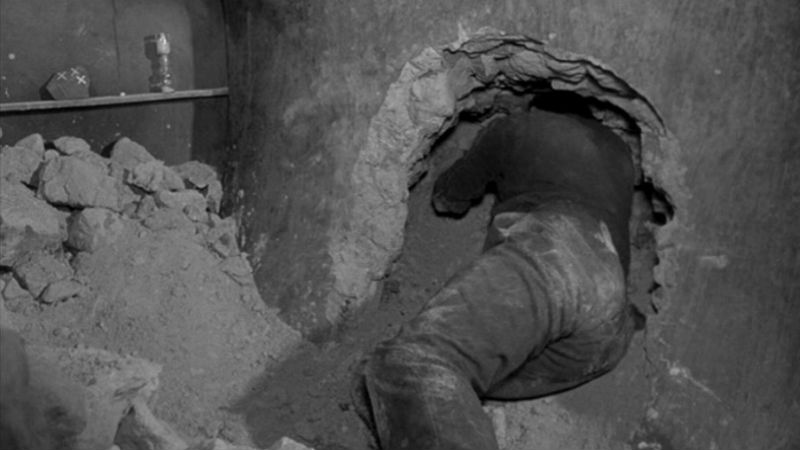 Swiftly cutting to the cell in 1947, Darban’s initial position as the lead protagonist is swiftly removed by the introduction of Claude Gaspard (Marc Michel) into the cell. A binary to all the macho men, including Darban, Gaspard’s is a shady character whose motivations for escaping are constantly unclear. Yet, he is welcomed into the plot to escape by all, which includes digging up a tunnel (the film title is French for “hole”). From the opening scenes onwards there is an abundant lack of music. Admittedly, not a negative statement, its use is replaced by diegetic sounds diegetic. Constant bangs and footsteps are omnipresent all scenes, helping to interpolate the audience into the claustrophobic space.

Within this cell, Ghislain Cloquet’s camera uses close-ups in order to create bonds between the group. Alongside such two pivotal elements as sight and sound, the use of a persistent presence in digging equipment et al through mise-en-scene accentuates to perilous task these men face in tunnelling their escape. Holding the frame as Keraudy’s huge arms slam a metal bar to the ground, Becker isn’t afraid to let his scenes unfold naturally. This applies throughout Le Trou, with such stillness capturing the palpable moment of men digging for their lives.

A standout use of mise-en-scene craft is the men’s looking glass, used to observe guards movements in the corridor. A toothbrush with a piece of glass attached at the end is not only a prisoner necessity but surprisingly becomes a vehicle for nuanced cinematography. Becker and Cloquet’s utilises it as a cinematic POV tool. Watching the film, I repeatedly questioned how the director and his team achieved these shots – the sign of a masterful piece. 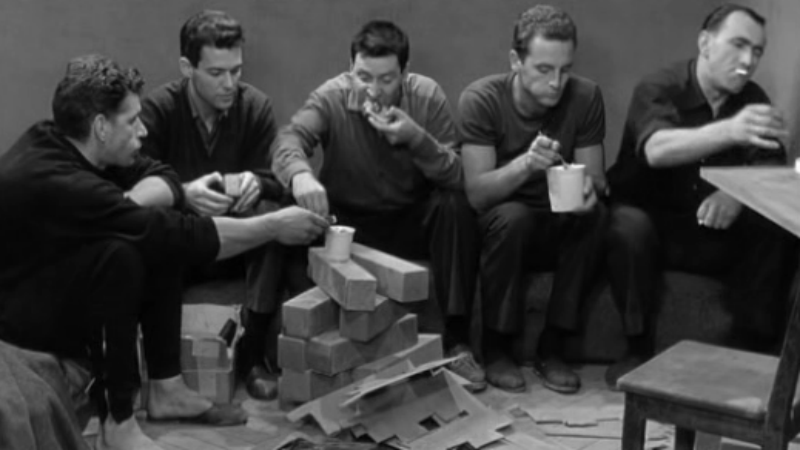 As the men dig deeper and deeper, their situation in the cell becomes more volatile, with the tension of being suspected or found escaping real. Every innovative trick in the trade is used by the crew to conceal their plans to escape. Such an ambiance of tension is enlarged by a conversation between the prison director and Gaspard in the final act.

Melville has been quoted as praising Le Trou ‘’as the greatest French film of all time.’’ Though I am hesitant to state the same as Melville, its shades of moral ambiguity, inspection of man’s physical power, and themes of brotherly betrayal construct a highly philosophical piece. Going out with a bang, as they say, Becker’s cinematic legacy will be eternally embodied in his last work, Le Trou. Watching the bad guys and their tricks has never been as much fun.

Le Trou is now out on DVD, BD and EST, along with three more restored titles from Jacques Becker.

Two French birds with one stone: Studiocanal rescues the legacy of the often underrated French filmmaker Jacques Becker, and our first dirty pick is a timely celebration of the recently departed legend Jeanne Moreau - now on DVD, Blu-ray and EST [Read More...]

Are you classy enough? Jacques Becker's early masterpiece is a hilarious comedy challenging gender stereotypes and questioning the values of the French bourgeoisie - available in the UK for the first time [Read More...]