Alfred Hitchcock once famously said: “In feature films the director is God; in documentary films God is the director”. If his assertion is true, then in his role as God, director Rob Grant is apathetic towards Harpoon’s trio of characters.

An effective suspenseful genre picture, the pleasure we derive from watching the plight of these three characters is our shadow complex expressing itself. Not dissimilar to the moral distinction we draw between innocent intrusive thoughts versus the guilt of our actions, storytelling absolves us of guilt. The pleasure we get from the suspense and the humour from the suffering of these characters reveals our apathetic and cruel side. If we are honest, through cinema we communicate with our primitive self that derives pleasure from suffering, from which there is no escape.

When Richard (Christopher Gray) suspects Sasha (Emily Tyra) is cheating on him with his best-friend Jonah (Munro Chambers), it sends him into a fit of rage that leaves Jonah a bloody mess. As tempers calm and Sasha and Jonah are able to convince Richard that his suspicions were a silly misunderstanding, the three friends decide to clear the air by going out on the ocean on Richard’s yacht. Once out to sea the tensions continue to swell, and when the yacht’s engine fails stranding the trio outside of shipping lanes without food and supplies, they must set aside their differences to survive.

Grant’s tale of isolation and tension between three people features shades of Roman Polanski’s Knife in the Water (1962). However, as a commercial genre film combining comedy, horror and thriller in its dramatic plot, it does not have the art house sensibility of Polanski’s early masterpiece. Alfred Hitchcock’s Lifeboat (1944) is another fitting comparison, itself a commercial film set in WW2. Tapping into the political tensions of the time, a group of American and British survivors clamber into a lifeboat following a torpedo strike on their liner by a German submarine, and when they allow a German officer to come aboard, they must decide whether they can trust him. The dramatic approach of these three films is to centralise the interpersonal dynamics of the small group of characters, by isolating and applying pressure to provoke their adversarial inclinations. 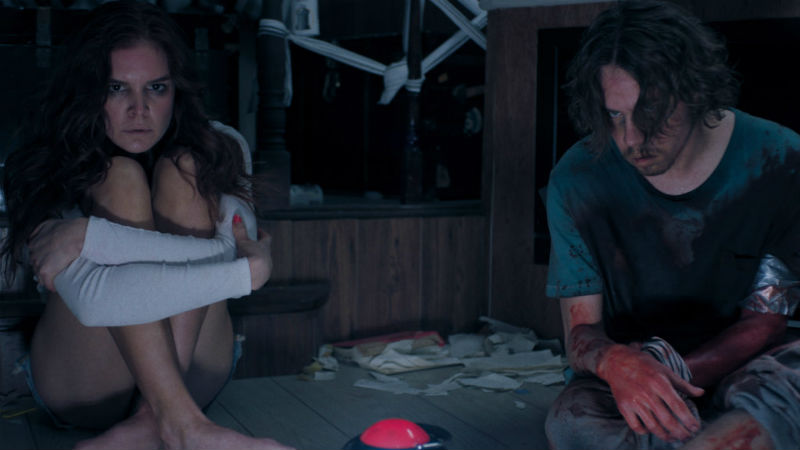 While Lifeboat, Knife in the Water and Harpoon are all distinct works with questions of trust, they become studies of rationale versus impulsive emotion. Grant’s film features more shades of Polanski’s than Hitchcock’s film, striking similar beats of incidents and masculine competitiveness. Yet if Polanski were happy to end ambiguously after the breach of trust between husband and wife Andrzej (Leon Niemczyk) and Krystyna (Jolanta Umecka), Grant uses this to provoke his characters to explore themes of choice and the legitimacy of fate.

Harpoon effectively sustains its suspense across a succinct 82 minutes, that like the ebb and flow of the tide moves between a calm civility and tense stand-off between the trio. Sporting, the film never feels that it cheats us with its twists, instead by sharing the restricted point-of-view of its characters, Grant respectfully manipulates us viewers and sets us up to experience pleasurable twists. Tempering the violence and punctuating the film with gory scenes, the violence is never gratuitous, nor does it undermine the tension between the characters.

What keeps this story ticking along is both our naïve hope that they can find a way to survive together, and our indecisiveness. While we naturally sympathise with Jonah and Sasha over the violent and egotistical Richard, shifts of balance of power provoke an indecisiveness in our emotional loyalties. Whether consciously or not, Grant plays with this dynamic, by raising and thwarting our hopes of a happy ending, which is a counterpoint to the negative expression of the shadow complex. If we can express our apathetic cruelty through cinema, then we can also express our morality and humanity by what may seem indecisiveness, but is our instinctive expression of magnanimity. 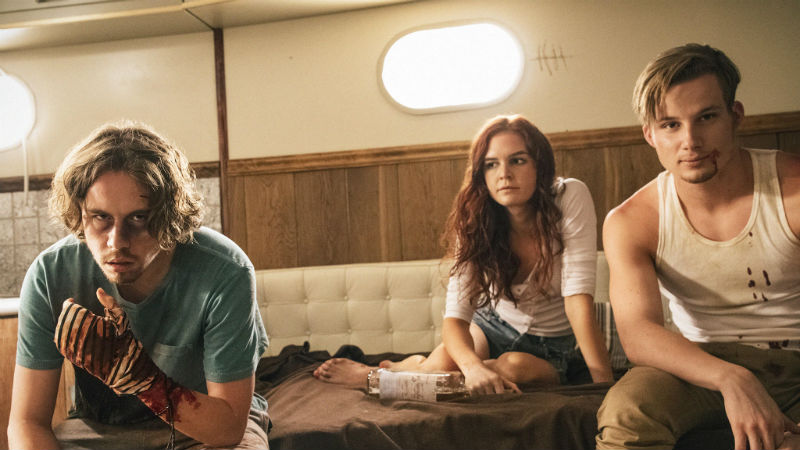 Harpoon is a tragic tale of how trust fractured cannot be fully repaired. If we are to read it in such a way that we see the trio positioned as victims of fate and misfortune, then this says more about us. Their situation is the result of choices each of them have made, and not the result of their victimisation by an all-encompassing metaphysical force.

Looking beyond them as prisoners of fate, Harpoon is a cautionary tale of the need for mindful choices, and that we create our own happiness, contentment or suffering. Still a simplified reading of Grant’s film, Jonah’s relationship with his parents feeds into his friendship with Richard and provides a subtle motive for a sub-plot of the drama, that looks to suffering as a cycle we create with others. Harpoon touches on darkly philosophical themes of how our continued existence is one of a continued cycle of suffering, that contemplates the cruelty of parenthood, life and birth – the person deprived of free will that sees his or her trauma feed into a communal and shared cycle of suffering.

In spite of its darker, existentialist thematic inclinations, Harpoon never loses its sense of humour and true to its intent is a fun genre picture. Grant effectively strikes the notes of suspense and comedy, yet he performs a discrete subversive act by offering a spark for a deeper philosophical conversation, understanding that simple stories can have thematic ambition beyond the superficial spectacle of pleasure.

The UK premiere of Harpoon played at the 20th Anniversary of Arrow Video FrightFest. A theatrical release is yet tbc.

What Keeps You Alive

Canadian filmmaker (who also happens to be one half of The Vicious Brothers) twists traditional woods horror story to convincing results - in cinemas and also on VoD on Friday, August 24th (US viewers) and as part of FrightFest on August 25th (UK viewers) [Read More...]