"Greasy movie"
As a young woman hangs out with her gangster boyfriend and his entourage on the Turkish coast, a mixture of sex and violence is never far away - English-language Danish production is now available on VoD

While it takes place in consistently bright sunshine near a Turkish habour town, there’s nothing pleasant about the family dynamics portrayed here. Although Sascha (Victoria Carmen Sonne) arrives at a Turkish airport wearing summer clothing and lugging a case at the start, the narrative wouldn’t do too well in the Bechdel Test as all her dealings with the world appear to involve men and revolve around sex and/or violence – real, implied or refused. Pretty quickly she’s in a parked white car with Bobby (Yuval Segal) and explaining to him that she’s €300 short. He complains that “pretty girls think everything is for free” and gives her a pretty unpleasant warning on behalf of the boss to ensure she’ll never make another mistake like that. Her one and only warning which is never discussed again.

Later Sascha is picked up by boyfriend Michael (Lai Yde) and his number two Bo (Bo Brønnum) in the same white car. They drive to the villa where the rest of the ‘family’ are waiting. Swimming Pool. Drink. Drugs. A couple of other women, one of whom Tanje (Laura Kjær) looks as young as Sascha. There’s clearly money to burn and Michael has put some of it into the tacky hotel where Sascha stayed overnight after her flight. 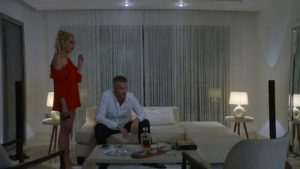 Male hijinks and larking about quickly give way to something darker. Take the loyal Musse (Adam Ild Rohweder) who barks when playfully called a dog. At one point he puts a foot wrong: he comes back to the villa after someone hasn’t shown up. Michael is concerned that Musse may have lead the police there. They take him from outside into a downstairs room while Sasha, Tanje and a child are sent to watch TV in the lounge. The three turn up the volume to hide the sounds of whatever’s going on in the other room. Later bearing flesh wounds he hands out presents to Michael, Bo and others. Michael tells him everything is okay and gives his an envelope of cash. His philosophy is to punish bad and reward good.

How this works out for the women in this group is much more sexual. Sascha is abused in some pretty unpleasant and explicit ways by Michael, which immediately earn the film a BBFC 18 certificate (and the same for its trailer below, although the material in the film itself is considerably stronger and far more unpleasant than what’s shown in the 18 trailer). 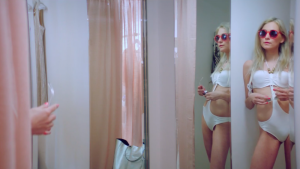 Not all characters here are as nasty. Dutch yachtsmen Tomas (Thijs Römer) is an easy going type who, it later emerges, has given up the cutthroat world of sales and marketing for a life sailing round the world with his pal Karsten (Stanislav Sevcik). Sascha meets the pair in an ice cream parlour queue and later takes Ecstasy with Tomas on the local beach. He’s a nice guy who is later going to wish he hadn’t come anywhere near Sascha.

Eklöf previously had a screenplay credit on Border/Gräns (Ali Abbasi, 2018) but her feature directorial debut is nowhere near as complex or skilfully orchestrated as either that, Burning (Lee Chang-dong, 2018) or Dragged Across Concrete (S. Craig Zahler, 2018). Both these latter films contain an element of misogyny. Yet while the female-written and -directed Holiday’s intention to express the voices of women placed in positions of submission might be admirable, this backfires in the finished film by failing to offer any way out of a misogynistic cycle of violence in which women are abused by men. A few unsettling scenes and shocks, not least in the closing 10 or so minutes where the piece veers off in one or two unexpected directions, aren’t really enough to lift the whole above that. Perhaps Eklöf should take a lesson from Revenge (Coralie Fargeat, 2018) which at least attempted to turn the tables.