Its title speaks of powerlessness in the face of an irresistible force and an involuntary movement in respect of a man-made, industrial era material suggesting a modern urban environment. Several characters inflict and/or are forced to endure suffering in a variety of unpleasant forms. Curiously, the literal dragging across concrete scene late in the over two-and-a-half-hour running length involves the towrope pulling of a wrecked car by a fully working one without any actual suffering at the point of dragging. Before and after, yes, but not at that point. And that scene isn’t in an urban environment at all but rather on a piece of industrial wasteland presaged by a discarded refrigerator and a dead rat on a dark road.

S. Craig Zahler’s third directorial outing after Bone Tomahawk (2015) and Brawl In Cell Block 99 (2017) boasts two starting points. A black ex-con comes out of prison and discovers his mother in debt and working as a prostitute. Two white cops are suspended for excessive violence after being caught on mobile phone video when arresting a Latino suspect. As in those earlier two films, the American director builds on his characters and their separate plights to construct a slow-paced but relentless journey through to his narrative’s conclusion. At the end it all makes perfect sense. However, on your first viewing you won’t see what’s coming. It plays out as a power struggle between various factions of white people at various social levels and black underdogs not content to stay in their place. 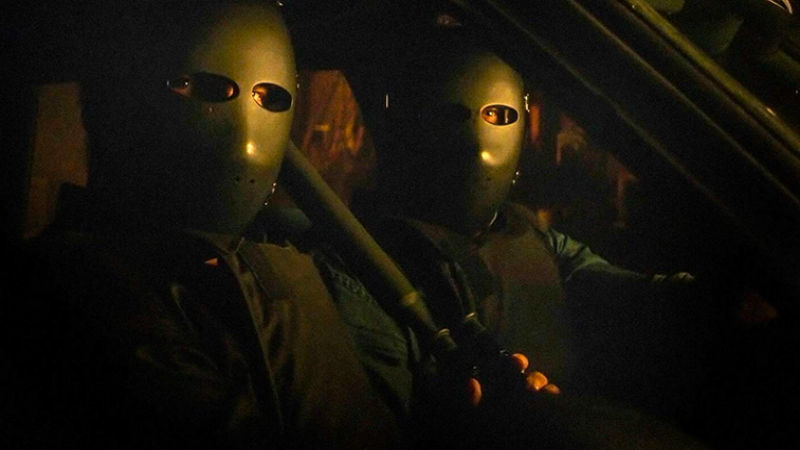 Ex-con Henry Johns (Tory Kittles, surely destined for major stardom on the strength of his performance here) is approached by old mate Biscuit (Michael Jai White) who is looking for help on an upcoming job which very quickly places both men well out of their depth. Meanwhile, Brett Ridgeman (Mel Gibson) and Anthony Lurasetti (Vince Vaughn) are the older and the younger cop who although on official leave following their suspension are pursuing leads which may or may not lead them to a crime – with half an eye on making a financial killing rather than upholding the law.

Zahler is a master of characterisation and knows how to direct with a minimum of fuss allowing actors to do what they do brilliantly. He also knows how to plot a movie. The whole thing clocks in at just more than two and a half hours, but you won’t notice the time. He manages to make, for example, two cops sat in a car on a stakeout into compulsive viewing as they interact with one another. There are many similarly low key scenes involving small numbers of characters from which the wider whole would lose something if you cut them out.

The opening image shows the black Henry having sex with a white woman in bed. He always fancied her in school. While he’s certainly having a good time, she maybe isn’t so much. It turns out their meeting was set up by Biscuit as a favour to Henry. The next woman we see is Henry’s mother who got into debt while he was in prison and into prostitution to pay the debt. Now he’s out of prison, Henry vows to take control and sort her debt out. Rosalinda (Liannet Borrego) is the deaf girlfriend of Vasquez (Noel G), the dealer the two cops arrest at the start: she is involuntarily soaked in a shower, stood under a cold air fan and questioned. The two cops “can’t understand” her protests because of her Latino accent.

Soon afterwards, we’re introduced to the nearest and dearest of each of the cops. Ridgeman’s daughter Sara (Jordyn Ashley Olson) is the teenage victim of a bicycling black youth throwing a soft drink in her face near her home, his wife Melanie (Laurie Holden) a former cop struck down with MS who these days needs a cane to get around. Lurasetti’s black girlfriend Denise (Tattiawna Jones), the one woman here seemingly in control of her life, is a power-dressing professional constantly on her mobile to colleagues and clients. We never discover exactly what she does, but it involves a high degree of organisation and self-motivation and her phone conversations suggest she’s really good at it. 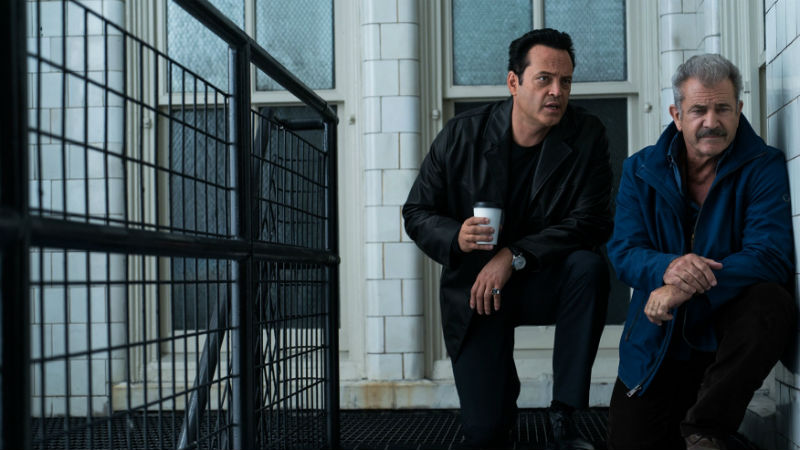 Part way through the narrative we meet Kelley Summer (Jennifer Carpenter), returning after maternity leave to her detested but high paying job in a financial district bank at the behest of the manipulative father of their baby. If that sounds grim, it’s nothing compared to the extremely nasty humiliations that will later be inflicted upon her as the plot unfolds.

Apart from Denise, all the women are victims. They are peripheral in this male world, even if their roles as mothers, partners or offspring motivate their menfolk to do what they do. Most of the men locked in to the overarching narrative from start to finish are victims too.

The ruthlessly efficient, criminal gang leader Lorentz Vogelmann (Thomas Kretschmann) spends much of the proceedings with his two masked sidekicks in the back of an armoured van being driven by the two black guys Henry and Biscuit. Elsewhere, memorable male characters are tossed into the mix for little more than one scene each: Police Chief Lt. Calvert (Don Johnson) gives the two cops a hard time, Fredrich (Udo Kier) is a shady character who owes Ridgeman, Mr. Edmington (Fred Melamed) is Kelley’s ingratiating boss at the bank.

Zahler is far more interested in telling a rattling good yarn and exploring character nuance than in playing to political correctness. If you can get past the pervasive misogyny of the piece, this slow-burner of an urban crime thriller with its gripping performances great and small will have you on the edge of your seat. A bleak and original vision of the world – and a dirtylicious treat.

Dragged Across Concrete is out in the UK on Friday, April 19th. On VoD on Monday, August 19th.

Dragged across Concrete is in our list of Top 10 dirtiest films of 2019.

Jack Nicholson plays a TV journalist who commits identity theft and travels around the world in a dead man's shoes, in Antonioni's splendid essay on self-deceit - in cinemas from Friday, January 4th [Read More...]