"Filthy genius movie"
A story of Hollywood set in 1969 mixes elements of historical truth with fictional events and characters to epic effect - on Netflix on Wednesday, July 7th

Hollywood. 1969. Screen actor Rick Dalton (Leonardo DiCaprio) has been reduced from former star of TV Western Bounty Law to villains in other serial episodes. He needs to do something to get his career back on track. His stunt double Cliff Booth (Brad Pitt) acts as his driver and general handy man and is also a trusted friend and confident. As Cliff drives around the city, he sees hippie girls hanging out or thumbing lifts on the Los Angeles roadside, some of them as he will discover members of Charles Manson’s now infamous ‘Family’ cult. Rick’s next door neighbours on Hollywood’s exclusive Cielo Drive are celebrity film director Roman Polanski (Rafal Zawierucha) and his pregnant, rising star actress wife Sharon Tate (Margot Robbie), although Rick has never met them. 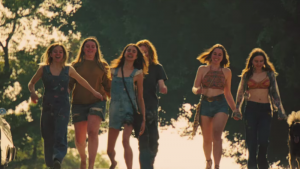 Littered with pop culture references ranging from movie posters on billboards and titles on theatre marquees to clips from film and television, popular music from the period and even radio ads featuring Batman, Tarantino’s script mixes fact and fantasy, real and fictional characters. A part of it takes place in February 8-9 1969 then leaps forward to August 8-9 of the same year. The latter date is that of the real life Tate murders when members of the Manson Family broke into the Polanski/Tate home and killed everyone who was there, including the eight and a half months pregnant Sharon Tate. The Manson Family were living on the Spahn Movie Ranch, a former location for shooting Westerns owned by the now blind George Spahn (played in the film by Bruce Dern in an astounding turn). A little of Sharon Tate’s movie career is covered too, specifically The Wrecking Crew (Phil Karlsen, 1968) which is playing at a cinema that the actress visits. 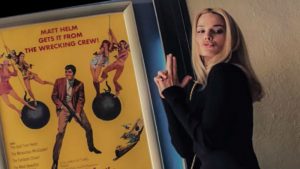 Although the Rick Dalton/Cliff Booth characters and story are pure invention, they intertwine with more factually and historically based material. There’s an apocryphal sequence of Rick playing the Steve McQueen (Damian Lewis) character in The Great Escape (John Sturges, 1963) with DiCaprio cleverly replacing McQueen to interact with the other actors in otherwise genuine footage from that film. Booth gives flower girl Pussycat (Margaret Qually) a lift to the Spahn ranch hoping he might be able to visit his old boss whom he hasn’t seen for years. Tarantino has a lot of fun with all this, both on period Hollywood Studio lots and in the wider world of L.A. and beyond, at one point staging an impromptu fight between Booth and Bruce Lee (Mike Moh) when he was playing Kato in The Green Hornet. 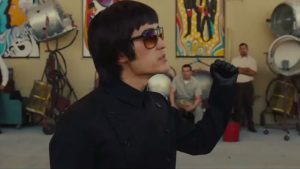 The whole thing runs for the best part of three hours but never outstays its welcome. Tarantino here makes full use of his lengthy running time, packing in a riot of incidental visual and aural detail and allowing scenes to play out for just as long as they need. The whole thing is a love letter to Hollywood, to L.A. and to the tail end of the 1960s and is hugely entertaining. Pitt and DiCaprio make memorable onscreen buddies. Neither of them has ever been better. Nor, arguably, has Tarantino. The amazing cast to be found in its numerous, additional bit parts includes Dakota Fanning, Luke Perry, Timothy Olyphant, Al Pacino, Kurt Russell, Emile Hirsch, Michael Madsen, Zoe Bell, Scoot McNairy and Brenda Vaccaro. And the level of sheer background detail may make this a film you’ll want to return to again and again.

Once Upon A Time… In Hollywood is out in the UK on Wednesday, August 14th. On Netflix on Wednesday, July 7th. Also available on other platforms.

Two siblings with a very peculiar surname embark on a wild wild journey, in French director's dark, amusing and yet profound Western - on Netflix on Friday, March 12th [Read More...]