"Dirty gem"
It's a man's world. Or is it? A predictable male fantasy switches gear to bloody thrill ride when a woman turns the tables on a group of men perpetrating violence against her – available on VoD from Monday, September 10th

Flown in by private helicopter pilot, Frenchman Richard (Kevin Janssens) takes Jen (Matilda Lutz) to his luxury home in the middle of the desert for a day or so. He is clearly rolling in money, she appears to be in love with him but perhaps she’s play acting: something of the gold-digger in her, maybe. She wears skimpy clothing emphasising sexual aspects of her body. She comes on strong to him. Passion ensures. All of which is a lot less fun to watch than it sounds: the male is little more then a caricature of the sort often found in the less carefully made end of French action and gangster movie production while the girl displays every patriarchal cliché in the book in the way she moves, dresses, acts and interacts.

Director Fargeat has a very different agenda, however. The next morning, Jen is startled by the unexpected appearance of two male gunmen outside the patio window. Richard’s business associates Stan (Vincent Colombe) and Dimitri (Guillaume Bouchède) have arrived for the three men’s hunting party a day earlier than expected, shattering the couple’s intended privacy. No matter: all four drink and party into the night and Jen just can’t resist coming on as strong to Stan as she did to Richard the previous day. 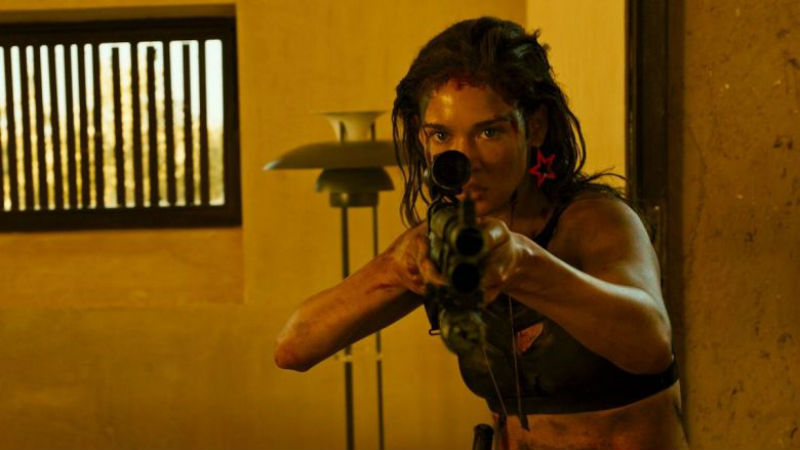 The day after that, when Richard is away for a few hours, Stan tries his luck at love, is understandably shocked when Jen rejects his advances then somewhat less understandably rapes her. He even invites Dimitri to join in, but the latter is nursing a hangover and leaves them to it, turning up the TV volume to drown out the woman’s cries. When Richard returns, being an irredeemable male stereotype, he sides with his two pals not his girlfriend.

At this point, the by-the-numbers feminist tract suddenly becomes both inventive and interesting. Ensuing events lead to Jen’s impalement on a small, desert bush. Her self-extrication leaves her with a distinctly phallic, pointed piece of wood through her stomach. She retreats to a womb-like cave and ingests some of the local peyote to remove the wooden projectile, cauterise the wound and emerge as a blackened, scantily clad huntress who will track down each of the three men in turn and exact her revenge. The remainder of the film (which is most of it) does exactly what it says in the title – and with considerable style.

It’s not the woman reborn theme and intentions that are impressive: they arguably get in the way. Fargeat is so determined to put her feminist heroine on screen that, for instance, Jen doesn’t take the shoes off the first man she kills but proceeds to track the others barefoot. The images are more arresting, the proceedings less believable. 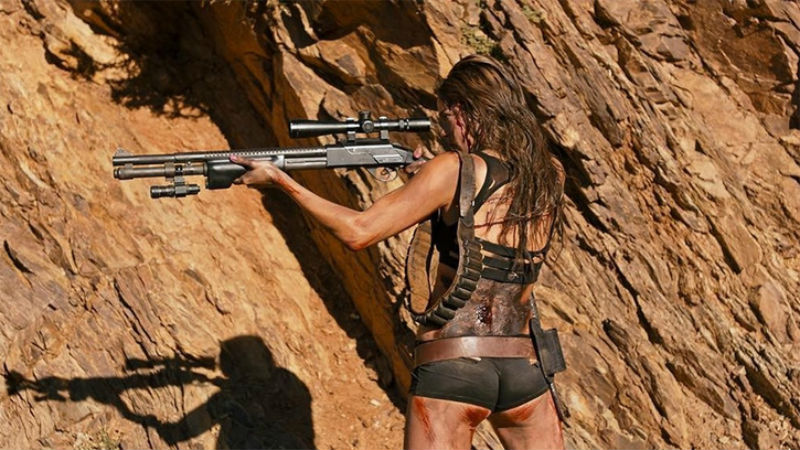 However, what Fargeat is clearly very good at is orchestrating the cat and mouse antics of pursuer and pursed, on which level Revenge is absolutely peerless once it eventually gets going. On foot, she tracks down one of the men parked by a waterhole, another as he drives along a trail and finally her former boyfriend back at the luxury home where it all started, now a labyrinth of slippery, bloody corridors. Fargeat has fun with some highly sexualised Freudian imagery too, for instance having a man open up a vagina-like wound in his foot when he steps on a piece of broken glass. Apparently the director admires David Cronenberg.

If you can overlook its tedious, predictable male fantasy first reel, the last two thirds of Revenge deliver an edge of the seat thriller with a compelling, blood-soaked climax. From the moment the male/female power roles reverse, it becomes utterly compelling on a non-rational, visceral level, a French, feminist tract masquerading as a trashy US action thriller. Clench your teeth through the opening reel and you’ll enjoy (if that’s the right word) everything that follows.

Revenge is out in the UK on Friday, May 11th with a preview at PictureHouse Central, London + Q&A with Director Coralie Fargeat and star Matilda Lutz on Friday 4th at 6.30pm. It’s out on VoD on Monday, September 10th.

Watch the official UK film trailer below (but be warned – it contains one serious spoiler: we recommend you watch the whole movie first):