Hunched over a fulgent light, Jan Nowak-Jeziorański (Philippe Tłokiński) is commanded to offer some sort of documentation from the insides of his car. Jan, nonchalant in gesture and smile, turns to his pocket and shoots the advancing soldier with a bullet sharper than his quips. That Tłokiński bears a passing resemblace to OO7 incumbent Daniel Craig would suggest a tale of encouraged espionage to its audience. Tłokiński, steely eyed, blond rimmed and devastatingly handsome, is the perfect lead to star in a World War caper, steeped in the collected charm of David Niven’s A Matter of Life and Death (Michael Powell/ Emeric Pressburger, 1946).

What Jan has over James Bond was his genuine existence. Affectionately nicknamed The Messenger from Warsaw, Jan worked as an emissary, spreading himself over the commanders of Poland’s Home Army resistance movement and the Polish Government while living in exile in London, at the height of the WW2. His investigation is slow, deliberate and arguably ponderous. It’s not a perfect tribute to the real life spy, the film spends an inexplicable 15 minutes to set itself up and there are some moments that feel too much like tacked-on fan-servicing (a priggish early scene featuring the disputatiously poised Winston Churchill is groan inducing). 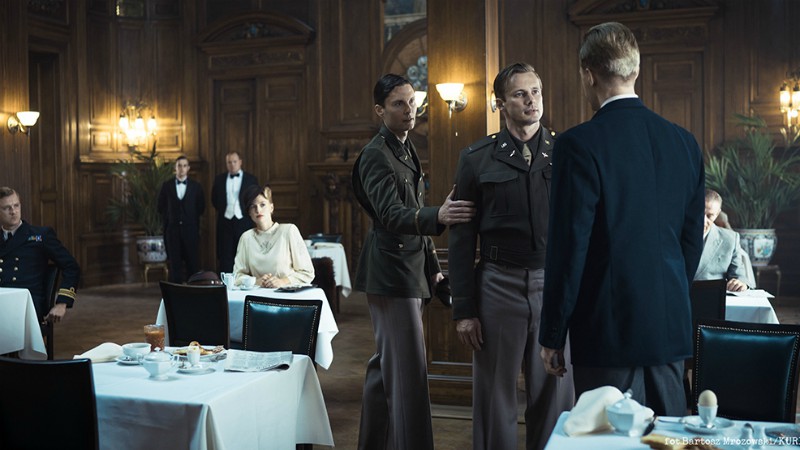 More happily, we can report that there are moments of claustrophobic fused tension in an atmospheric escapade, endearing in snow rimmed decor, cascading in dimly-lit neon night action scenes. Dapper, natty and focused, Tłokiński looks good with a pistol in hand, branding his weapon as romantically as he seduces the irrepressibly pretty Doris (Julie Engelbrecht). If nationality weren’t a factor, Tłokiński might make a very strong James Bond in future years. Cannily, a high proportion of the film is accomplished through spoken English, inviting a different type of audience to appreciate Polish cinema, channeling the imprint of British sixties spy craft in its cinematography.

Kurier is out in cinemas across the UK from Friday, June 28th.

Fifteen-year-old girl is deported to Siberia during the Soviet occupation of the Baltic nations, in a film with strong echoes of Steven Spielberg's most harrowing movie - on DVD and digital HD on Monday, July 15th [Read More...]

Survival epic about lone survivor of a Norwegian resistance boat during WW2 uses devices of mainstream war genre to convincing results - in cinemas and also on VoD on Friday, January 4th. [Read More...]