"Filthy genius movie"
Fifteen-year-old girl is deported to Siberia during the Soviet occupation of the Baltic nations, in a film with strong echoes of Steven Spielberg's most harrowing movie - on DVD and digital HD on Monday, July 15th

In 1993, Steven Spielberg released his most rewarding work. Schindler’s List, a dissertation of Holocaust despair, left its director, critics and audiences emotionally ragged. Spielberg explored one of Europe’s most shameful acts in black and white palettes, including Jewish citizens entirely dehumanised in crated trains. Cut from the same cloth, director Marius A. Markevicius chooses to film his adaptation in luminous flushed colours, which makes one particular rape scene more tangible and repellent than Ralph Fiennes’ equivalent in Spielberg’s opus.

Often overlooked in scholastic history books, the Soviet purges in the Baltic nations and beyond were every bit as horrific as the Nazis. The youthful teenager Lina joins her mother in a concentration camp. Separated from her precious Lithuania and father, Lina must use the pen, paper and artful insight to prove to her father that she is alive and well. Bel Powley proves herself a commendable artist, echoing the collected pain as the camera stares at her alone as she and others are carted like untamed animals into a confined carriage. 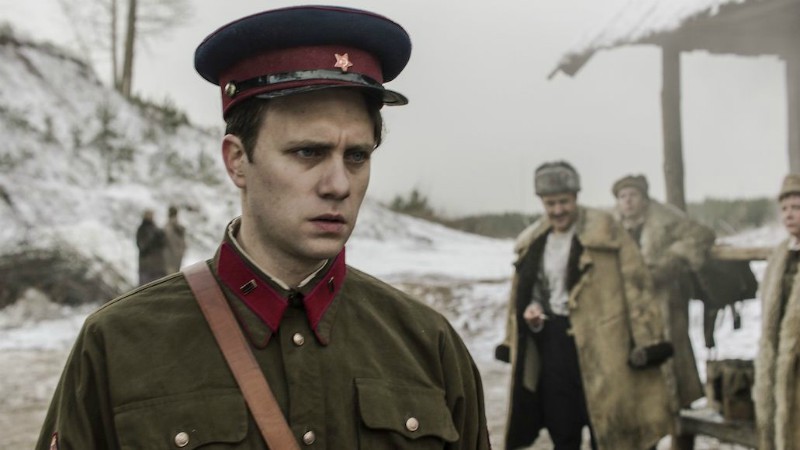 Through her flashbacks, we see a contented life where motor cars, scenic rivers and charming romantic ventures come plentiful. That it cuts back to an army barricaded prison. Misery makes the transition even crueller. Ashes In The Snow prides itself on latent, visceral violence, hidden beneath the characters reddened, saddened eyes.

There is a humanity at play. Offended that they cannot stay safely in someone’s house, Lina’s mother (Lisa Loven Kongsli) informs her children that they are criminals in the eyes of the Soviets. Upholding herself with all the courage she has, tears are only a heartbeat away, anger and violence a few seconds. Markevicius keeps his attention on the characters he follows, finding truth behind the people ahead of the concepts. Behind the political ideologies, idiosyncrasies and ideals, it was humans who suffered at the hands of their leaders.

Through her art, Lina finds her voice in its purest form, just as Markevicius finds his voice in the many Linas who felt this reality all too keenly. Evocative, incisive, inclusive and invigorating, this is the spiritual successor to Schindler’s List.

Ashes in the Snow is out on DVD and digital from Monday, July 15th.