A wildly inventive and unashamedly British affair, Strickland’s latest film mixes tacky 1970s aesthetics with several workplaces – a large clothing store, a personal loans company and a washing machine repair firm. Clothing emporium Dentley & Soper is run on a series of arcane regulations, obedience to the seemingly arbitrary rules for conduct of personnel at Waingel’s Bank is encouraged by smarmy middle management types Stash and Clive (Julian Barrett and Steve Oram) while washing machine repair firm Slaverton’s Wash insists any personnel who mend their own machines must do so on the firm’s books.

Although the film is constructed on the portmanteau template used in many horror films, whether it’s a horror movie as such rather than a very strange and stylish arthouse movie is open to debate. Loosely linked narratives are woven around serial characters – Waingel’s employee Sheila (Marianne Jean-Baptiste), Slaverton’s repair man Reg Speaks (Leo Bill) and his fiancée Babs (Hayley Squires). Each of them one way or another in turn acquires the dress. Sheila is a middle-aged wife whose husband has left her and whose adult son is living at home. She wants the dress to impress potential blind dates. Reg is given the item to wear on his drunken stag night and Babs stumbles upon the garment in their home.

The dress seems to possess a life of its own, moving along floors, slinking under doors, hovering in domestic spaces, causing washing machines to break down when it’s put in a load and occasionally even hurling itself at people. It also appears in some bizarre dreams and causes its wearers to develop nasty chest rashes. 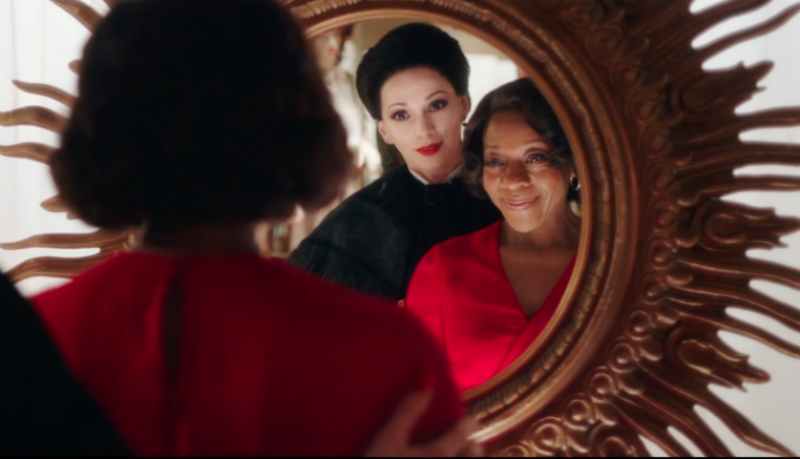 Yet, except at the most perfunctory level. Strickland’s interest doesn’t lie exclusively with the the mechanics of the horror movie. The director is fascinated by petty corporate rules and regulations, and their verbal manifestations. Dentley & Soper shop assistant Miss Luckmoore (Fatma Mohamed from director Strickland’s earlier The Duke Of Burgundy, 2014, Berberian Sound Studio, 2012 and Katalin Varga, 2009) spouts her own esoteric sales patter scarcely comprehensible to the average shopper. Stash and Clive constantly refer to Waingel’s rules on employee conduct while Reg appears to go into a trance state whenever he starts to talk in detailed technical language about issues with specific washing machines, as if reciting a pre-written speech from an unseen technical manual.

A further fascination with surface is evident throughout the piece. Little sequences comprise runs of static photos shot on film, announcing that the sales season has started or a newspaper page informing us that the woman who originally modelled the offending dress for the Dentley & Soper catalogue has met an untimely end. The whole thing has a 1970s feel: people have telephone landlines and leave messages on each others’ answerphones, while some of the store’s shop floor graphics and promo ads couldn’t have come from any other decade. And the fastidious and highly mannered Miss Luckmoore who initially sells the dress to Sheila, is straight out of that decade. 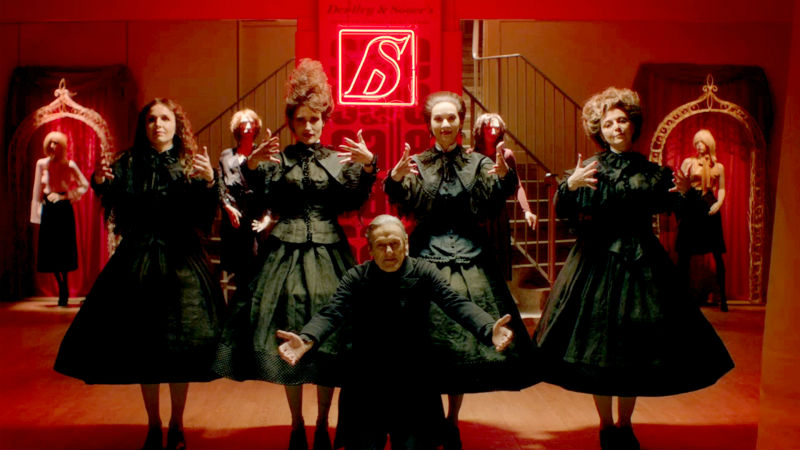 Strangest of all is the ritual of Miss Luckmoore and several colleagues, seen in the Dentley & Soper TV promo ad, which seems to consist of a group dance luring customers into the store like a coven of witches in pursuit of some nefarious purpose. At night, Luckmoore removes a wig to reveal a bald head then crawls foetus position-like into a dumb waiter and descends, only to ascend back to the same room the following morning. The store and its highly cultured staff seems like a distant cousin to the malevolent witches’ coven running the dance school in the Suspiria (Dario Argento, 1977) and given Strickland’s early essay on Italian giallo horror film making Berberian Sound Studio (2012), that connection may be no accident, underlined by Cavern of Anti-Matter’s highly eclectic musical score. Incidentally, the lower echelons of the cast include sometime David Lynch soundtrack composer Barry Adamson (as Zach, one of Shelia’s dates) and improvisational musician and Strickland alumnus Adam Bohman.

There’s much here to satisfy a variety of tastes – whether you admire classic giallo horror, lurid seventies material or arthouse movies in general. Critical favourite Strickland is slowly developing a fascinating body of work. In Fabric, odd and off-kilter though it may be, is as impressive as anything else he’s done. Don’t miss.

In Fabric is out in the UK on Friday, June 28th. On Curzon Home Cinema in August.

Lara C. Cory interviews the director of In Fabric and finds out the secrets and peculiarities of his latest movie, a dirty gem of filmmaking shining with mystery and twisted sexualities [Read More...]