Teenage sisters Celeste (Raffy Cassidy) and Eleanor (Stacy Martin) are caught up in a school shooting, where many lives are lost. Instead of making a speech at one of the victim’s funerals, the sisters perform an superb song, which is so appreciated that it becomes iconic. Soon swept up (not entirely unwillingly) in the rock and celebrity business, they find themselves performing in Stockholm, under the purview of the straight-talking manager (played by Jude Law, in a magnificently authentic performance), who micromanages every detail of their lives. Despite the manager’s attention, Celeste manages to conceive an illegitimate daughter.

Celeste becomes more and more famous, making, among other things, rock videos wearing glittering paint-on face masks. Unfortunately for her, a group of young Croatian terrorists wearing face masks just like hers decide to open fire on a holiday beach, killing several people. In one of those cruel irrelevant linkages so often made in celebrity culture, a connection between her and the terrorists is mooted. 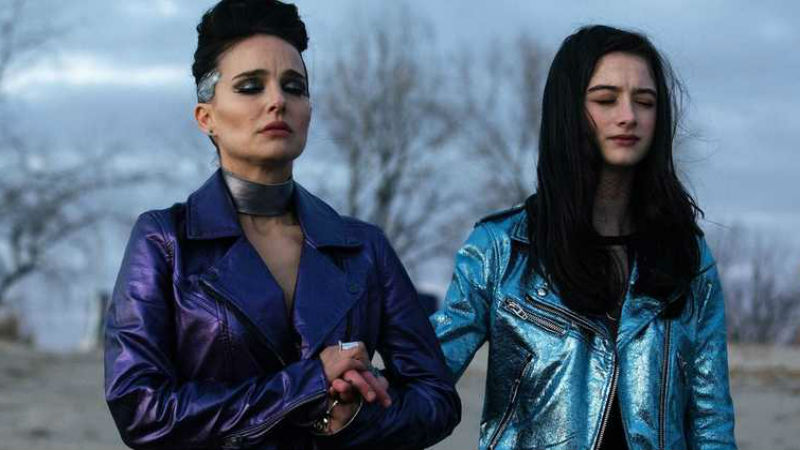 By the age of 31, Celeste (now played by Natalie Portman) is a mad, foul mouthed neurotic, embarrassing and worrying her daughter and sending her publicists up the wall as she pronounces on the terrorist incident inappropriately at a press conference. This ends up with an apocalyptic tantrum in her dressing room before an upcoming rock concert. Despite the incident, the rock concert is magnificent. She blows everyone away. The filming of the rock concert is impressive, and it will draw many people to see the film on its strength alone.

This type of film is not new in the annals of Hollywood. I Could On Singing (Ronald Neame, 1963), a vehicle for Judy Garland, is also a film about how American show biz swallows people up and spits them out as sad wrecks. Judy Garland was one of Hollywood’s best-known broken. And let’s not forget Marilyn Monroe. Both Vox Lux and I Could Go On Singing end with showstopping performances. They send out the morally ambiguous message that, yes, show biz is tough but nevertheless the show must go on. This reveals a central contradiction in American culture and the American Dream. Hollywood and other American cultural vehicles are quite happy to admit that the going is tough but what is taboo is to admit that perhaps the system doesn’t actually work. 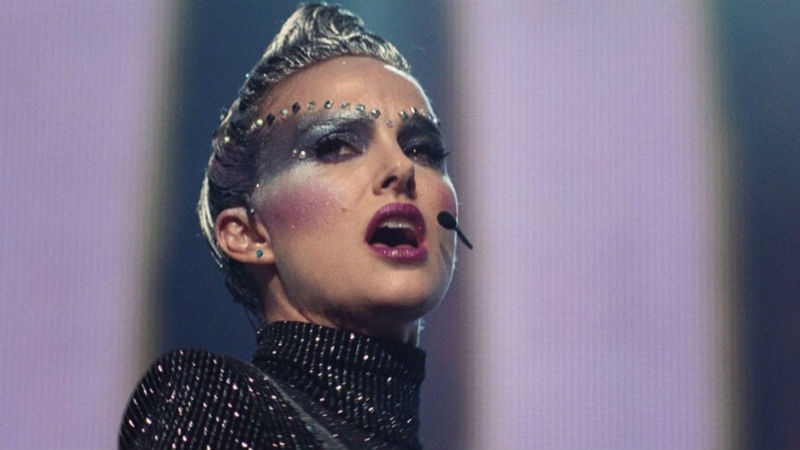 This raises another issue. Seldom have I sat through a movie where I had to admit that the performances were wonderful – this goes particularly for Natalie Portman and Jude Law and the production values were of the highest order – and yet loathed so much what was being depicted. What goes on in celebrity culture with its false values, artificial news, obsession with image and rampant materialism is evil. It markets people as products. It turns legitimate entertainment into pornography. No wonder celebrities become wrecks. This is what Vox Lux could failed tackled more explicitly, which would have turned it into a truly dirty movie.

Vox Lux is is out in cinemas across the UK on Friday, May 3rd.