New York in the 1980s. Published biographer Lee Israel (Melissa McCarthy) is down on her luck as she can’t secure an advance from her agent Marjorie (Jane Curtin) for a proposed book on Fanny Brice. Lee likes her whisky and is generally rude and intolerant of other people, an attitude that has scarcely helped her career. She is struggling to pay the bills and when her beloved cat gets sick, the vet won’t give her credit. In financial desperation, she takes a stack of books to a local bookseller but he’ll only buy two – and those for a paltry sum.

At this point, she’s drinking in a bar when she’s spotted by Jack Hock (Richard E. Grant) who hasn’t seen her since they were both “pleasantly pissed at some horrible book party” where, she seems to recall, something happened. He is just as self-centred and rude as she is, if somewhat more outrageous, and they hit it off. 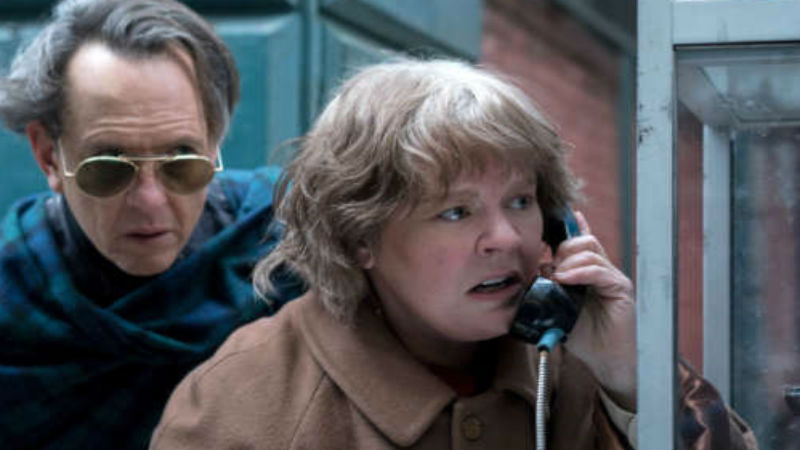 Desperate for money, she sells a treasured personal letter from Katherine Hepburn to book dealer Anna (Dolly Wells) who is incidentally a fan of Lee’s own books. Lee realises there is money to be made and following the chance find of another celebrity letter in a public library, she starts first spicing up real letters via added postscripts then concocting entirely fake ones. Soon she’s using particular types of paper and specific typewriters to churn out fakes by the likes of “Lillian Hellman, Edna Ferber, Dorothy Parker, Judy Holliday, Louise Brooks, Marlene Dietrich and sincerely yours Noël Coward”.

Lee lets the unshockable Jack in on all this and, when her name is put on a list of sellers of fakes, enlists him to sell the home made documents on her behalf. The pair come up with a plan for her to steal documents from archives, replace them with fakes then sell the real letters. They fall out though after he housesits for her, brings a man back to the flat and generally trashes her apartment in her absence. That’s not quite why they fall out, but to reveal the exact reason would be a spoiler so we won’t go there. Meanwhile, their schemes catch up with them in the form of two FBI agents…

Adapted from the late, real life Lee Israel’s biography covering her time as a literary forger, this boasts a winsome performance from Richard E.Grant as the and who “fucked his way through New York” before succumbing to the Aids virus in later years. Far more impressive, however, is McCarthy, previously the brash and irritating comedienne in the likes of Bridesmaids (Paul Feig, 2011) and Tammy (Ben Falcone, 2014) playing an introverted woman virtually incapable of relationships beyond caring for her cherished cat. 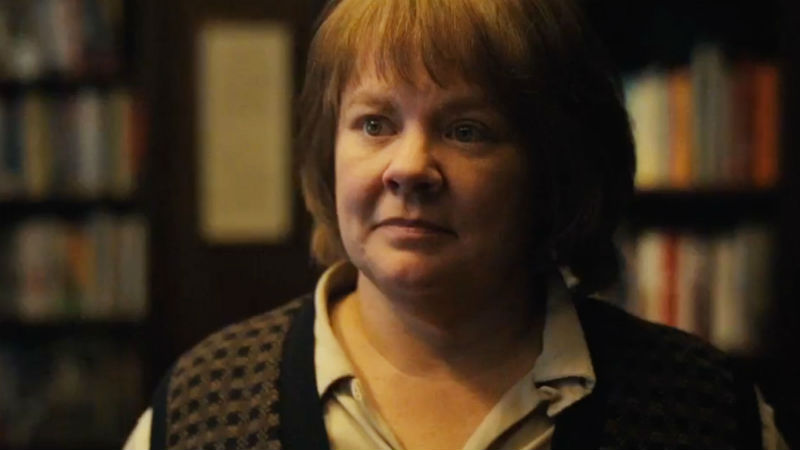 With a deftly observed, adapted screenplay by Nicole Holofcener (at one time slated to direct this) and Jeff Whitty, this is a reasonably compelling character study of a woman possessed with an extraordinary aptitude for literary forgery, seemingly unstoppable once she discovers it. McCarthy is a revelation, whether pounding different makes of typewriter, insulting her agent or simply fussing over the cat. This may have something to do with her prior experience playing comedy and her attendant skills in comic timing: actors coming from that background (think: Steve Carell or Bill Murray) often achieve the extraordinary when required to play straight roles.

When McCarthy and Grant share the screen, there’s a palpable chemistry between them. Several other memorable performances include various minor booksellers, among them the aforementioned Dolly Wells and McCarthy’s husband and sometime director Ben Falcone, plus an archive librarian and a vet’s receptionist. The film has its flaws, among them an annoying, very conventional jazz score and lighting which tries a little too hard to be relaxing and easy on the eye. These minor defects scarcely detract from McCarthy’s deeply heartfelt and strongly nuanced performance though. She is a totally unexpected asset here and the main reason to see this film.

Can You Ever Forgive Me? is out in the UK on Friday, February 1st. Watch the film trailer below:

Not just another colourful Christmas movie! Beautifully shot in grainy black and white, family drama explores the Aids epidemic and Christian values in Texas in the 1980s - in cinemas from Thursday, December 20th, and then on VoD on Monday, December 24th [Read More...]