"Greasy movie"
Four friends seeking relaxation in an luxurious villa instead are confronted with ghost of the pasts, as a mysterious visitor is about to arrive - now available on BFI Player

F Francisco (Nuno Pardal), Simão (Ricardo Barbosa), Vasco (Ricardo Pereira) and Joana (Oceana Basilio) are virtually cut off from the rest of the world in a large and extravagant villa somewhere in Portugal. It’s a sweltering summer, and they spend most of of their time in the swimming pool, strutting around in skimpy bathing suits, rehearsing selfies in front of the mirror or dancing to Brazilian songs. It sounds like most people’s idea of paradise. But it’s not.

Behind the apparent idyllic setting there’s a lot of tension. Sexual tension, emotional tension. Not all is pretty and clean. This is a place for “gin, sun, pool and flies”, says one of the friends, thereby highlighting the duality of the sumptuous summer abode. The distant sound of sirens and helicopters is pervasive throughout the film. Such luxury and isolation are strangely suffocating, and never liberating. 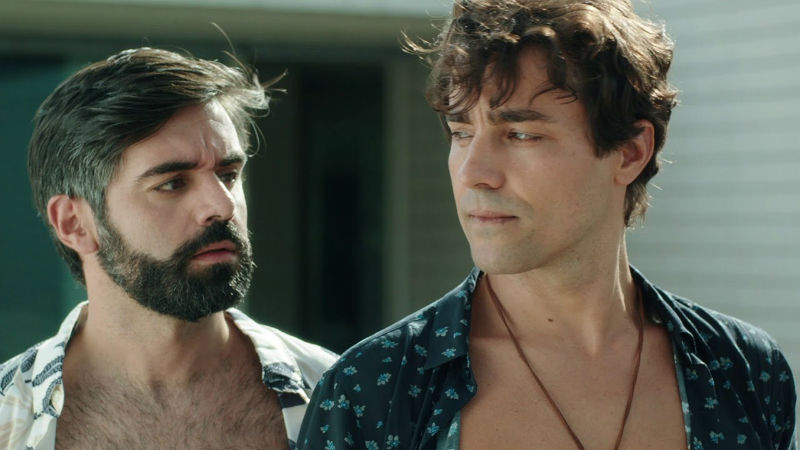 Most crucially, a mythical man called David is about to arrive any day. All four friends have been romantically connected and remain infatuated with the elusive male. They all long and fear his arrival in equal measures. They gradually break down in their anxiety. They are indeed fond of each other, but they are also competing amongst themselves. There’s only one David, and only one of them can have him. A lot like in Pier Paolo Pasolini’s Teorema (1968), except that the irresistible man is nowhere to be seen. In fact, the entire film narrative is constructed upon David’s impending arrival. You will be forced to stick around until the end of 82-minute feature in order to see his face and experience his power – or not.

Most of the dialogues in the film are about their past connections with David, all in both sordid and picante detail. There is a lot of voice-over conveying the most profound emotions that they are unable to vocalise to each other. Otherwise the four friends are mostly laconic, floating on a giant flamingo buoy (pictured below). All in old-fashioned nostalgic and melancholic Portuguese fashion. They make bleak and witty remarks: “Life is ugly, that’s why people have children” or “When you have a child give him Bergman at six and Tarkovsky at eight, and illusions are over”. 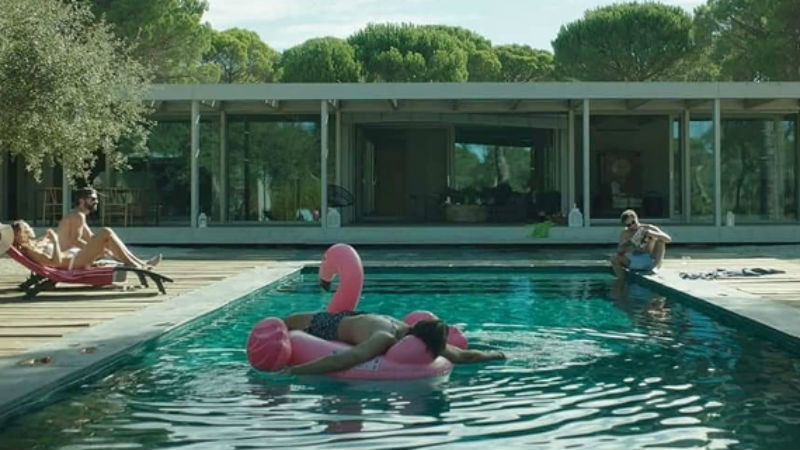 Ultimately, Sunburn is a mockery of failed modern love, and people tragically trapped in conservative dreams of marriage. It’s effective and riveting enough to keep you hooked until the end. The performances are convincing, too. The script, however, insistently delves into petit bourgeois afflictions, and some people might find it a little pedantic. I still enjoyed it, though.

The entire movie soundtrack is delivered by Johnny Hooker, a fast rising and very talented Brazilian LGBT musician. The lyrics (which are translated throughout the movie) are very pertinent: “I’m going to do some black magic in order to tie you to me”, or the very subtle: “do you still think of me when you fuck him?”

Sunburn showed at BFI Flare, when this piece was originally written. It’s out on BFI Player on Monday, April 22nd.